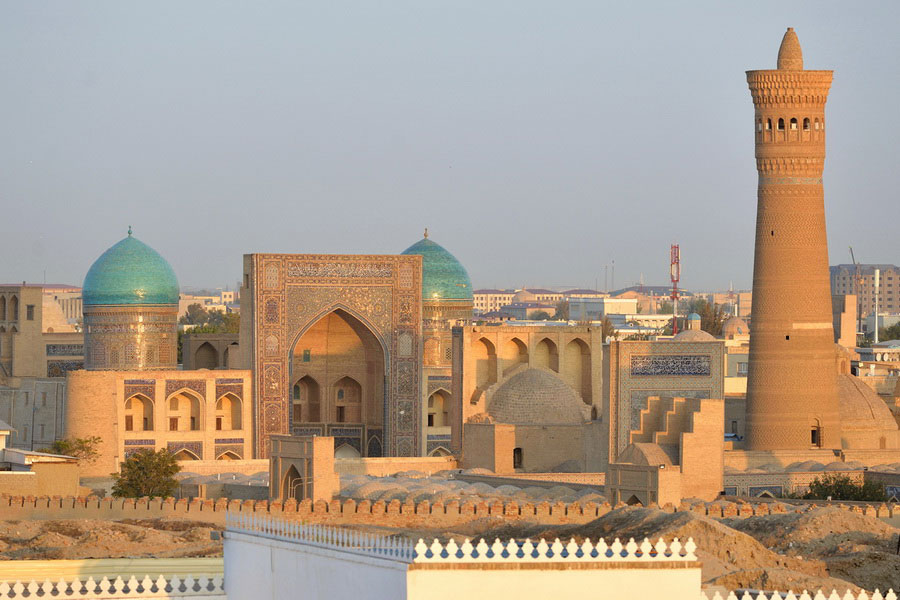 Bukhara is an ancient settlement with a history that goes back to the early centuries A.D. In the 6th century it became the capital of the early feudal lands of the Bukhara oasis. As the Shakhristan, the centre of a shah's realm, it was formed around an ancient citadel, but with the development of handicrafts and trade, new suburbs (rabads) arose beyond its walls, which were included with the Shakhristan in a new fortified wall. 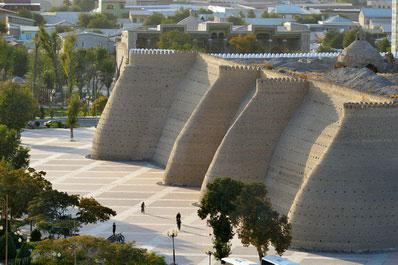 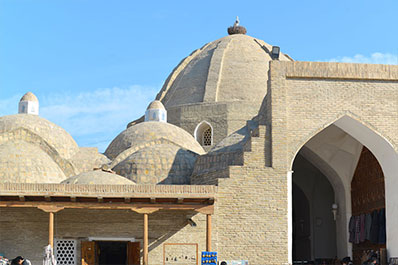 Remains of it dating back to the sixteenth century have survived to our day. Bukhara preserves genuine treasures of architecture of the pre-Mongol period, although not very many in number. One of them is the mausoleum of the Samanids, built in the ninth and tenth centuries. This modest structure is, by virtue of its artistic aspect and the lucid logic of its construction, a true monumental piece of architecture. The art of its construction, the virtuosic use of fired brick in decoration, and the lay-out of the building place it among the masterpieces of world architecture.

The architecture of the following period is better expressed in the Kalyan minaret, built in 1127, at the same time as its Djuma (Friday) mosque (for prayer of the assembly, observed on a Friday), which no longer exists. The powerful column of the minaret is 9 meters in diameter at the base and grows slightly narrower towards its 46 meter height. The minaret is exquisite not only in its magnificence and ornamental brick work but also for the art with which it was built. It has stood for 800 years now without once needing repairs.

Outside the walls of Bukhara stands the Namazgah, a mosque for five-times daily private prayers (built in 1119-1120), with a sixteenth century Triple-arch gallery. The south portals of the Magoki-Attari mosque are highly characteristic of the very decorative architecture of the twelfth century. The decorative details of the portals are famous because of the fine techniques involved. The few Bukhara masterpieces extant of the 11th and 12th centuries testify to the splendid building skill of the architects of the period, and the subtle artistry of their ornamentation. 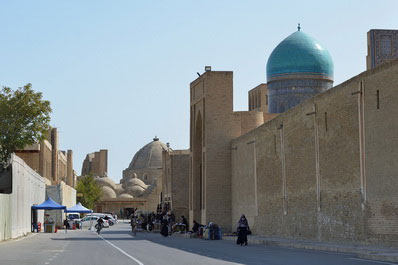 The street leading to the trading domes 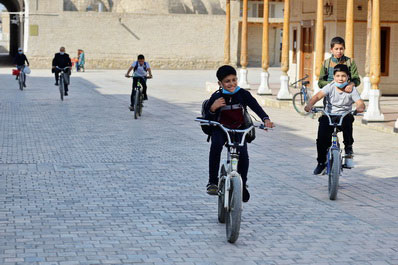 Schoolchildren in the old town

In the post-Mongol period there was no extensive construction work in Bukhara and in the other cities of Central Asia. But in the next century there was increased activity in this sphere. During the time of Ulug Bek Bukhara acquired a new madrasah (1417). Everything in it is characteristic of Ulug Bek architecture - the clarity of the design, excellent proportions, and understated decorative details.

In the 16th century, after the establishment of the Uzbek Shaibanai dynasty, Bukhara once again became the capital of a large Central Asian state. The city grew and new walls were built. The intensive construction here started with a Friday mosque, erected in 1514 in the place of an older twelfth century mosque beside the Kalyan minaret. It became one of the biggest structures in Central Asia. On the other side of the square in which the minaret stands, the Miri-Arab madrasah was built in 1535-1536. The madrasah, the mosque and minaret comprise one of the most impressive ensembles in Bukhara.

The same method of kosh, or, of paired buildings, was used in the construction of the kosh-madrasahs, the Modari-khan (1566-1567) and the Madrasah of Abdullah-khan (1588-1590). The architecture of small town mosques combined the technique of monumental architecture and popular tradition. Such are the Balyand and Khoja Zaineddin mosques (16th c.). The ornamental design of their interiors is on a par with the best Samarkand structures of the fifteenth century. 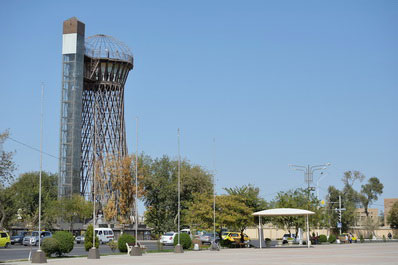 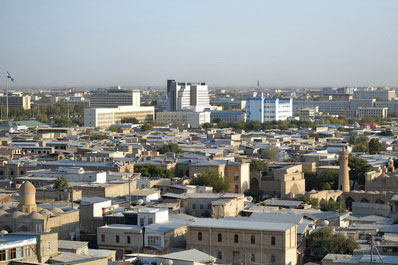 View of the new city in Bukhara

Civil building played an important role in 16th century Bukhara architecture: the bazaar takis, caravansarais and baths. They are extremely expressive in their clear-cut silhouettes and constructional solution. One of the important Bukhara ensembles, the buildings around the Lyabi-khauz date back to the 17th century. The earliest of them, Kukeldash madrasah (1568-1569) is the largest building in Central Asia among similar structures. In 1620 the Lyabi-khauz pool was dug in front of it, faced with large lime flagstones and its perimeter planted with trees. At the same time, on the two sides of the pool were built the "khana-gah", a mosque and hospice, and the Nadir-Divan-Begi madrasah. The structures stand by the expansive surface of water in a most effective way.

The kosh technique was also used in the construction of the last important Bukhara building, the Abdulazis-khan madrasah (1652), opposite the Ulug Bek madrasah. Despite the fact that the two buildings differ in dates of construction, divided as they are by two centuries, they comprise a united and austere architectural ensemble.

In the eighteenth century, owing to the political situation, construction in Bukhara lost its former creative power. The individual buildings and whole ensembles of Bukhara played a great role in urban construction and continue to do so even today. The technique of placing them in groups in certain combinations strengthened their artistic influence and gave the finishing touches to the squares and thoroughfares of the city. It is in this that the importance of the architectural ensembles of Bukhara lies. Restored and preserved, they have now acquired a new lease on life, and comprise an integral part of the modern city's flavor.

From 1924 Bukhara was a part of Soviet Uzbekistan. Present day Bukhara is a historical and archeological museum under the open sky. Bukhara is approaching the age of 2500.