History of national currency, pictures of banknotes and actual exchange rate in Uzbekistan 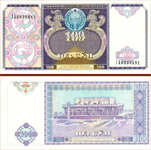 All over the country you can easily find exchange offices. Frequently, such offices are located in hotels and at the airports. Besides it, money can be exchanged at almost all branches of banks. The most widespread currency which is accepted by banks and exchange points are US dollars, euro, Japanese yen, the Russian roubles.

Guests of Uzbekistan should remember that Uzbek sum is the only currency which can be used as payment means in Uzbekistan. Payment for the goods and services in other currencies is illegal and imply criminal responsibility.