The mountain resort of Beldersay is located 80 km to the South-East of Tashkent. It takes approximately 1-1.5 hours by car on the new highway to get there during which you are in stunning highlands with the mysterious and picturesquespurs of the Western Tian Shan covered by archa, juniper and apple forests, bushes of dog-roses and barberry, and rapid rivers and waterfalls.

Thick snow cover lies on the region of Beldersay, on the slope of Kumbel Mountain on which the route is located, and it doesn't melt from December till April. Justifiably, Beldersay is considered to be a world class resort. Here, travelers can ski and snowboard as well as sun-bathe, thanks to the fact that there are more than 300 sunny days a year. 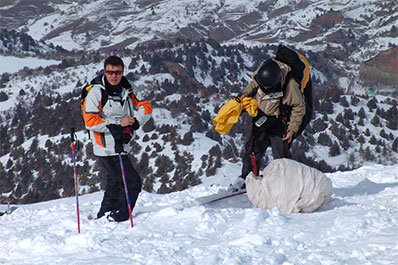 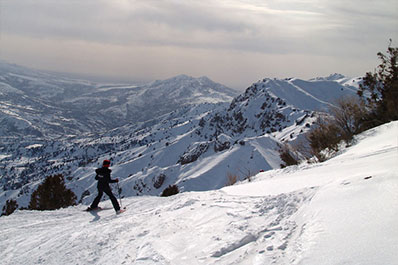 Until recently, a phenomenon of the Chimgan region had not been discovered - at a height of 1 meter off the thick snow cover the air temperature can reach +18OC! The continental climate provides the extreme temperature and abundant snowfalls. Due to sharp temperature variations between day and night, a firm surface is formed that adds better glide and provides first class exciting skiing. When the slope has been smoothed out, it is only necessary to wait until a new snowfall and then there is an opportunity to ski on fresh soft powder.

In Beldersay there are two coffee-bars open for visitors, and the one that is located next to the rope tow that allows you the opportunity to purchase fast food and drink hot home-made wine during the skiing.

The distance to the nearest skiing center "Chimgan" is 4 km, and there you can go to a Disco club or go on a horse riding trip. 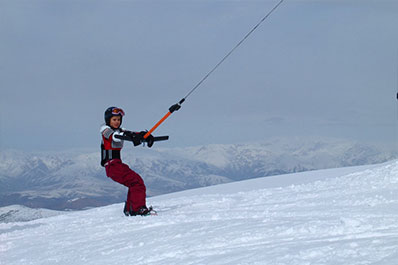 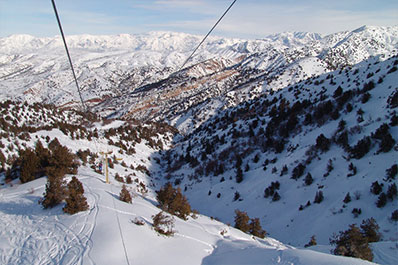 The ski routes of Beldersay

The Beldersay route is officially registered in FIS (Federation of International Skiing). The entire length of the route is 3020 m. The route with the most extensive areas for skiing is considered a "black" (difficult route) and is divided into 3 skiing zones that can be conditionally divided into the upper routes from Kumbel Mountain (being served by the rope tow), lower route (being served by the chair-lift) and the extreme skiing zone to the left and right sides of Kumbel Mountain.

Upper routes are not marked and are determined by the configuration of the peak itself. Basically, they are the "black" and "red" routes (6-7) but there are also 2-3 "blue" routes for beginners. The length of the routes is from 500 to 1200 m, though due to the huge size of the mountain there is a possibility for professionals oflonger traverses up to 2 - 3 km.

The lower route has a length of approx. 2,5 km. The entire route is "red", except for one small "black" area where the "aces" of "red" routes can descent sideways.

The Extreme zone is the area on each sides of Kumbel Mountain. Depending on the snow conditions these areas are very often buried by avalanches. In the last 18 years, 5 people have died due to prohibited skiing in the avalanche zone. That's why it is necessary to consult with the representative of the Rescue service regarding snow condition (an exception is the areas where caution signs or fence are installed).