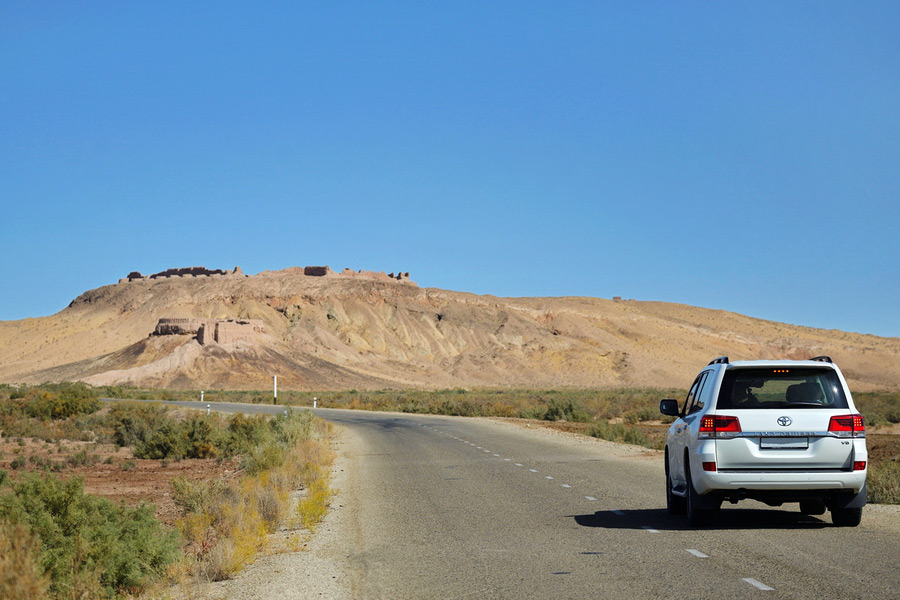 Central Asia covers an essential part of the Asian part of the planet. Its area makes up more than 1295 thousand square km, which is larger than Germany, France and Great Britain in total size. Central Asian territory spreads from the Caspian Sea on the west to the borders with China on the East and from the Aral-Irtysh watershed in the north to the border with Iran and Afganistan in the south. Its western and northern regions are represented by vast valleys, deserts and dry steppes surrounded by the Pamir-and-Alay and Tien-Shen mountain ranges on the east, some of whose peaks are the highest in the region and reach 7.5 km above sea level.

Nevertheless, Central Asia is far from being just a geographical definition. Primarily, it is a large historical and cultural region, having a twenty-five century long history. It's a region with an ordered particular historical and cultural community, different from that of other regions. The following republics are included in Central Asia: Turkmenistan, which spreads from the Caspian Sea to the middle reaches of the one of the largest central Asian rivers, the Amu-Darya (Vakhsh in ancient times, Oxus in Greek, and Jeihun in the Middle Ages); Karakalpakistan, within the Republic of Uzbekistan, located on the lower part of the Amu-Darya river; Uzbekistan covers the central part between the two rivers (named as Maverannahr in the Middle Ages) i.e. the lands between the two biggest central Asian rivers, the Syr-Darya and Amu-Darya. Tadjikistan is situated to the south-east and Kyrgyzstan to the north-east. During its centuries-long history, the region was firmly connected with the lands of the present Southern Kazakhstan in terms of history and culture. 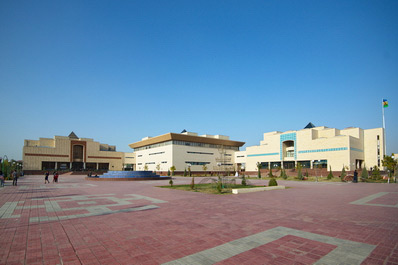 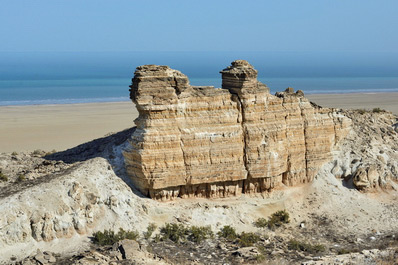 The desert areas of Central Asia are characterized by a continental climate and intensive insulation, extreme air aridity, and little precipitation. Its remoteness from any oceans, the major source of humidity, little atmospheric precipitation, high summer temperatures, and prolonged dry periods have caused the formation of the vast desert regions here.

The deserts in Karakalpakistan cover 13.67 million hectares, which is more than 80% of its territory. The Aral Sea environment gradually and slowly evolved and was the location of the Mesozoic-Kainazoi seas, precipitation and alluvial layers accumulation brought from the mountains. This caused the formation of the vast bedded and alluvial plains. The cretaceous tertiary and quaternary deposits took part in their formation. Cretaceous rocks were formed by the sea and continental formations, represented by sand and clay in the Tokmakata, Kulandy peninsulas, Aktumcyk cape, Beltau, Kuskanstau, Sultanuizdag, and other Paleozoic and secondary layers and crystalline rock outcrops. The north-western parts of the desert are much younger in geological terms, i.e. the Ustyurt plateau is of the late tertiary period.

The Barkhan sands represent a typical desert illustration. The territory of the present republic of Karakalpakistan is a kind of "Archeological reserve". More than 300 archeological sites are located there. This place was called Khoresm in ancient times. 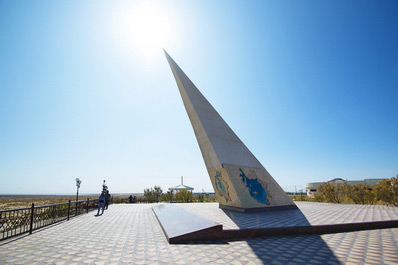 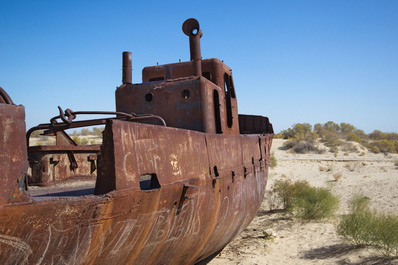 Khoresm is the state which existed during the ancient and medieval periods on the lower reaches of the Amu-Darya River on the territory of the modern republics of Uzbekistan and Turkmenistan. The Khorezm Archeological and Ethnographic Expedition, led by S.P. Tolstov contributed greatly to this geographic history study. Having started the work in 1937 on the lower regions of the Amu-Darya and Syr-Darya rivers, and on the adjacent parts of the Kara-Kum and Kysil-Kum deserts, the expedition discovered and studied a great number of archeological monuments of different eras, from the Stone Age to the late Middle Ages. That enabled them to deduce the general the history and culture of the Khorezm inhabitants, and that of the whole south-eastern Aral Sea region.

The most ancient sites of primitive people, revealed in the Khorezm oasis and the adjacent desert regions, are related to the Late Stone Age epoch (6-3rd millenniums BC). Tribes of hunters and fishermen lived here in large ground-based dwellings of wire-frame construction, covered with bark and reeds.

The Khorezm ethnic community originated with the complex processes taking place in the Bronze Age, such as the assimilation of the local population with foreign cattle breeding and agricultural tribes from the Eurasian steppe zone, and the constant infiltration of various population groups from the southern regions of Central Asia. It was under the influence of the southern regions that by the middle of the second millennium BC, irrigated agriculture had developed on the lower Amu-Darya River. This was the time of the steppe Bronze Age culture formation. Irrigation-based agriculture had become predominant here. 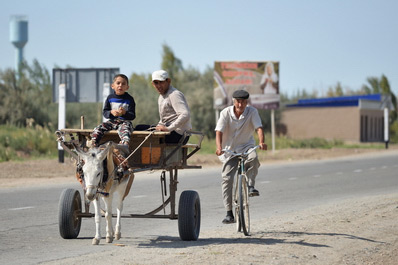 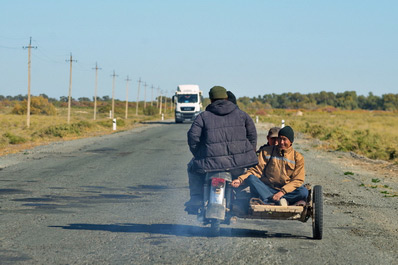 The further irrigated agriculture development was characteristic of the era of the Late Bronze Age, represented by the Amirabad cultural monuments (10-8th cc. BC).Semi-dugout huts began formation of the settlements consisting of 15-20 houses.

The first craftsmen then appeared. The primitive community decay process was intensified. Society property differentiation enhanced. The formation of proper Khorezm civilization was related to the so-called archaic culture (7-5 cc. BC) represented by monuments like the Kyuzeli-gyr site and Dingildzhe farmstead.

Further irrigated agriculture development, connected with the construction of the big diversion canals by that period was one of the important factors contributing to the Khorezm State system formation. Fortified city type settlements and multiple country farmsteads appeared.

It was in the middle of the 6th c. that Khorezm was conquered by the Akhemenides. The country was involved into intensive cultural exchanges.

Between 5-4th c. BC Khorezm gained independence and kept it all through Alexander the Great's eastern campaign and the Greco Macedonian tsars ruling in Central Asia. In 4-3rd cc. BC the Khorezm people created their own special art culture through the synthesis and development of local and borrowed elements.

The burial mounds of the Sarykamysh delta are evidence of the contacts of Khoresm's western province's population of Sarmat cultures.

The Khorezm Afrigid culture of the early Middle Ages (5-8th cc.), formed on a local basis under the influence of partly nomadic tribes, differs much from that of its predecessors.

By the end of the Afrigid period, especially after the Arabic invasion in the 8th c., Khorezm art and culture started acquiring an image common to all the countries within the caliphate, while still preserving some traditional features.

In the epoch of the Great Khorezm Shahs, who created a vast empire between the 12 - 13th cc. from the Indian border to the Caucasus, a great artistic and cultural upheaval was observed. The power and glory of that epoch was reflected in the construction of the main social and religious buildings, decorated splendidly with carved alabaster, murals and slip glaze slabs, as well as further craft development. Progress in ceramic crafts was represented by colored glazing improvements and the use of the potash slip, producing half-faience dishes.

After the Mongols invasion in the 13th c. Khorezm became a part of the Golden Horde and influenced greatly the culture of the latter.

Urgench, the capital of Khorezm, located on the caravan cross roads connecting the Volga river region cities and Central Asia, was one of the biggest crafts centers of Central Asia. The ceramics of that time represent a variety of artistic methods: underglaze and overglaze painting, relief, engraving, and punch. The vegetable pattern predominated among ornamentation motifs. Zoomorphism could also be seen occasionally.

Colored glass decorations were varied and richly ornamented as usual. Exhibits stored in the vaults of the archeology department of the State Arts museum named after I.V. Savitsky and in the Institute of History, Archeology and Ethnography of the Karakalpakistan branch of the Academy of science of the Republic of Uzbekistan are of great interest and enable archaeologists to trace back the history of culture of the Khorezm oasis and the neighboring regions through the millennia. 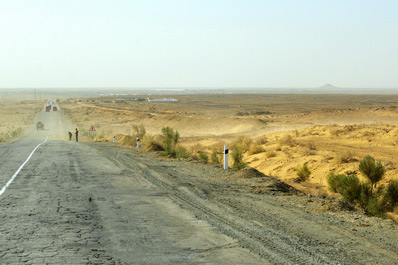 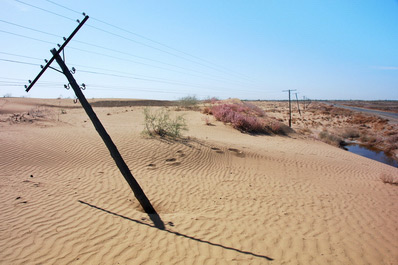 The artistic content and style of the region were altered to a certain extent under the influence of social, economic and ethno genetic, as well as ideological factors. Khorezm art developed in close connection with the cultures of neighboring countries. Growth and collapse were often brought about by violent political events. Still, many local cultural features appeared to be stable and have been preserved until the present day in the applied arts and folk architecture of the modern population inhabiting the territory: Karakalpaks, Uzbeks and Turkmens.

The Archeological monuments of Karakalpakistan

In Karakalpakistan you can find beautiful, varied landscapes and the magnificent ruins of historical monuments and archeological sites. 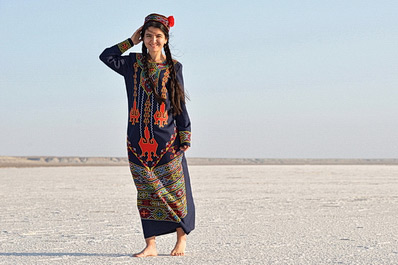 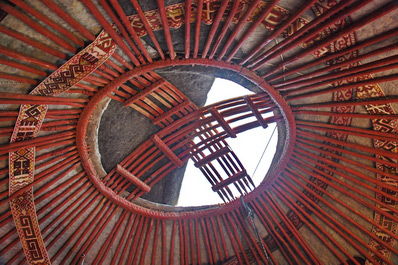 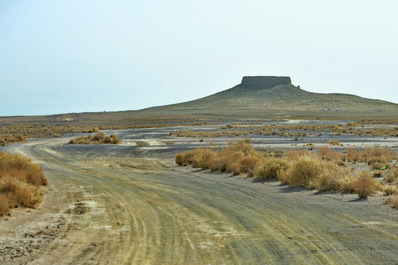 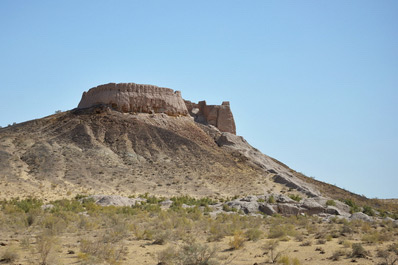 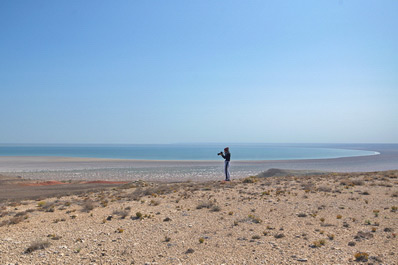 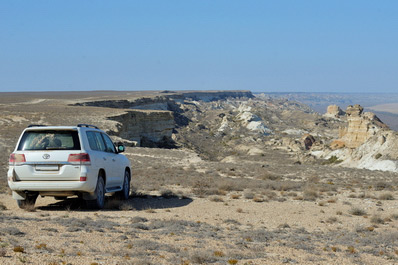