The water that serveth all that country is
drawn by ditches out of the River Oxus, into the great
destruction of the said river, for which it cause it falleth
not into the Caspian Sea as it hath done in times past, and
in short time all that land is like to be destroyed, and to become
a wilderness for want of water, when the river of Oxus shall fail.

Millions of years ago, the northwestern part of Uzbekistan and southern Kazakhstan were covered by a massive inland sea. When the waters receded, they left a broad plain of highly saline soil. One of the remnants of the ancient sea was the Aral Sea, the fourth largest inland body of water in the world.

The Aral is an inland salt-water sea with no outlet. It is fed by two rivers, the Amu Darya and Syr Darya. The fresh water from these two rivers held the Aral's water and salt levels in perfect balance.

In the early 1960's, the Soviet central government decided to make the Soviet Union self-sufficient in cotton and increase rice production. Government officials ordered the additional amount of needed water to be taken from the two rivers that feed the Aral Sea.

Large dams were built across both rivers, and an 850-mile central canal with a far-reaching system of "feeder" canals was created. When the irrigation system was completed, millions of acres along both sides of the main canal were flooded.

Over the next 30 years, the Aral Sea experienced a severe drop in water level, its shoreline receded, and its salt content increased.

The marine environment became hostile to the sea life in it, killing the plants and animals. As the marine life died, the fishing industry suffered. 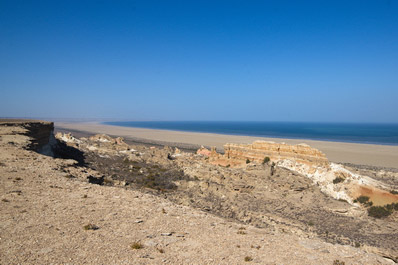 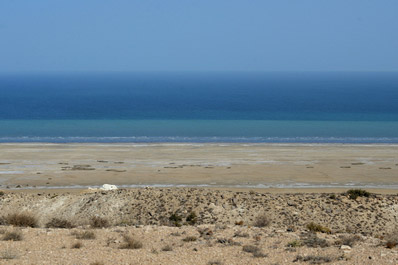 The Soviet scheme was based on the construction of a series of dams on the two rivers to create reservoirs from which 40.000 km of canals would eventually be dug to divert water to the fields. The fields flourished but with such vast areas of monoculture, farmers had to use massive amounts of chemical pesticides. And with irrigation, salt was drawn to the surface of the soil and accumulated. When the Tahaitash Dam was built on the Amu Darya near the city of Nukus, there was no water left in the riverbed to flow to the Aral Sea, hundreds of kilometers away. To the surprise of the inhabitants of Muynak, the Aral Sea began to shrink.

At first, they assumed it was a temporary condition and dredged a canal to the receding shore so boats could continue to ply the sea and still dock at the wharves. But the effluents that did reach the sea were laced with a deadly mix of salt and pesticides from the cotton fields. Fish populations plummeted and eventually, when the canal was 30 km long and the sea continued to move away, the boats were abandoned to lie like great leviathans on sands that were once sea bottom. 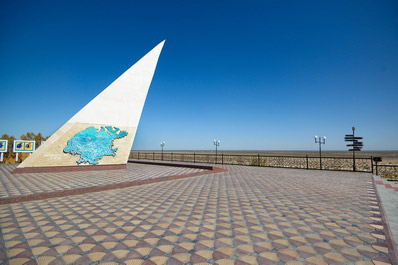 Former pier in Muynak and monument to Aral 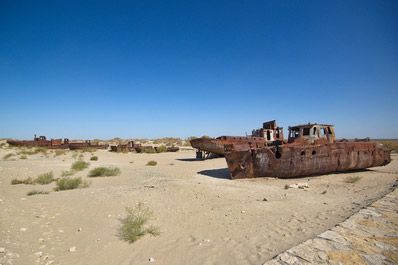 The Aral Sea was a rich source of fish. Some 20 species were identified by biologists, including sturgeon and catfish. The town of Muynak, located on the edge of the sea, was a fishing town that also attracted travelers to its seaside vistas. In the 1950's, the Soviet Union decided the great plains were ideal for growing cotton. The critical factor to make it happen was water. Two great rivers feed the Aral Sea, the Amu Darya and Syr Darya.

Today, Muynak is a desert town more than a hundred kilometers from the sea. The only reminders of the once thriving fishing activity are the rusting hulks of ships and an ancient fish plant. The sea has shrunk to two-fifths of its original size and now ranks about 10th in the world. The water level has dropped by 16 metres and the volume has been reduced by 75 percent, a loss equivalent to the water in both Lakes Erie and Huron. The ecological effect has been disastrous and the economic, social and medical problems for people in the region catastrophic. All 20 known fish species in the Aral Sea are now extinct, unable to survive the toxic, salty sludge. 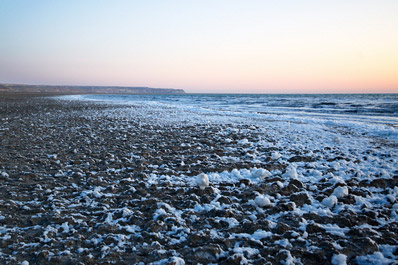 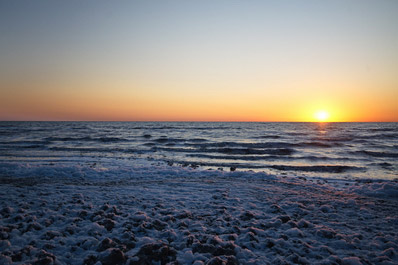 Sunrise on the Aral Sea

Changes to one part of a region often lead to other changes. Here are some of the results of the shrinking of the Aral Sea:

So a centuries old way of life has disappeared in decades. The vast area of exposed seabed is laced with pesticides, so when the wind blows, dust storms spread salt and toxic substances over hundreds, if not thousands of kilometres. It's estimated that 75 million tons of toxic dust and salts are spread across Central Asia each year. If the Aral Sea dries up completely, 15 billion tons of salt will be left behind. 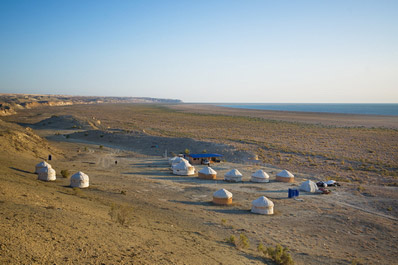 Yurt camp near the Aral Sea 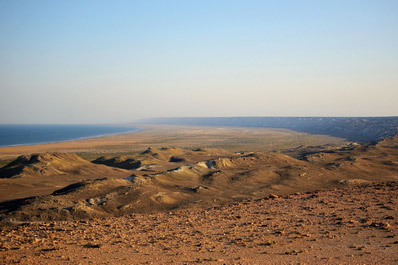 Sunset on the Aral Sea

Muynak is 210 km (130 mi) north of Nukus. Travelers can take a taxi or a bus to reach Muynak from Nukus. There are options for private accommodations in Muynak where you can stay overnight.

Video of Aral Sea and Muynak

We’re coming back from the Aral Sea. One last stop before heading to our hotel. Was an amazing thing to see up there.
Tour was nice and extensive. Guide was quite funny actually. We’re back safe and sound. Thanks for your efficient and responsive planning of the tour, everything went pretty well. We’re very satisfied.
Ferraz Antoine+1, FRA
Jun 2022
View All