Miri-Arab Madrasah in Bukhara, Uzbekistan has weathered centuries of change to remain a religious centerpiece and cultural landmark in the ancient city.

The Muslim clergy of the ancient world were believed to be descendants of either the prophet Muhammad or his close companions, and as such were held in high esteem. In 16th-century Central Asia, the role of these spiritual leaders was greatly expanded in both the spiritual and political realms. As a result, they held significant influence over the Shaybanid Uzbek Dynasty in power at that time. During this period, many religious buildings were constructed under their sway, including madrasahs, mosques and khanakas, special buildings for Sufi gatherings. 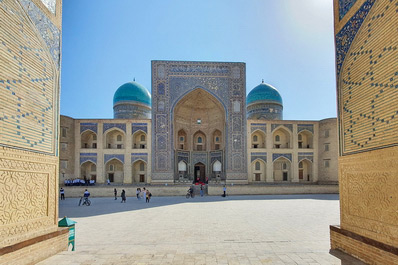 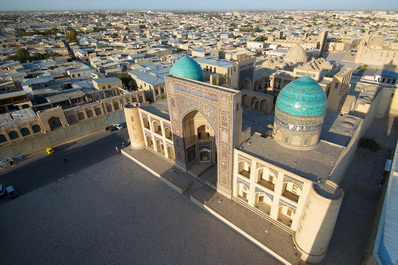 The medieval Arab geographer Magdisi noted a distinct pattern in the development of Eastern cities: "..opposite the mosque - a bazaar; opposite the palace - a square." In keeping with this Eastern practice, Miri-Arab Madrasah was erected next to one of Bukhara’s main markets, Toki Zargaron Bazaar, in the 16th century. Some historians believe that it was built from 1530-1536 by Sheikh Said Abdallah Yamani, also known as Miri-Arab, the spiritual mentor of Bukharan emir Ubaydullah Khan of the Shaybanid Dynasty. Others, however, align its construction with the Shyabanids’ victory over the troops of Shah Ismail I, founder of the Safavid Dynasty, in the 1512 Battle of Gijduvan.

Architecturally, the madrasah is traditional in appearance, with ornamentation typical for structures of the late Timurid era. Carved mosaics cover the azure archways, courtyard platforms and niches, while colored brick montages adorn the walls, abutments, vaults and arches. The abundance of intricately intertwined scripts harmoniously combine with multicolored floral decorations to produce an exquisite visual attraction. 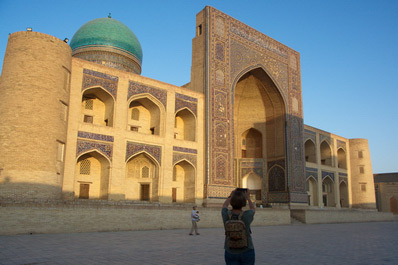 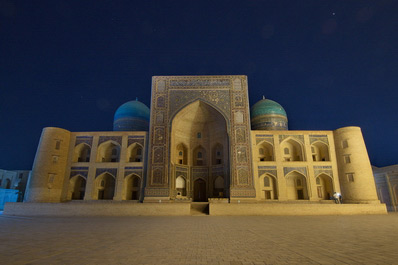 Since its foundation, Miri-Arab Madrasah has been considered one of the most authoritative educational institutions in Central Asia, with many outstanding philosophers and thinkers among its graduates and instructors. For many years, Miri-Arab Madrasah was the only functioning madrasah in the entire USSR, and in 1993 it was added to the UNESCO World Heritage List.

Today, Miri-Arab Madrasah in Bukhara continues to function as a spiritual and educational institution for Muslim youth. In addition to religious subjects, secular sciences and foreign languages are also taught. Miri-Arab Madrasah, along with Kalyon Mosque, Kalyon Minaret and Amir-Allimkhan Madrasah, now form the famous Poi-Kalyon Ensemble of Bukhara.