According to legend, an old man dying of thirst in the desert hit his staff and saw a well with water at the site of the impact. When he tried the water, the old man exclaimed, "Khey Vakh!", Which in Arabic means, "Oh, how tasty is the water!"

Khiva is an ancient city on the lower reaches of the Amu-Darya. In the fourteenth century it became prominent among the towns of Khorezm, and in the eighteenth century it was the capital of the Khiva Khanate. Only at the beginning of the nineteenth century was Khiva developed into a prominent cultural center. One after another, a number of monumental buildings were erected. They filled the older part of the city - the shakhristan Ichan Kala - and many of them were built by the Eastern gates of Palvan-Darvaz and along the street which runs towards the western gates.

None of the other Central Asian cities have whole parts of their ancient city, such as the Ichan Kala district in Khiva, which have been preserved in such a good condition. It is a historical and architectural reservation which provides an example of what a feudal Central Asian city used to be like. Hardly any of the structures dating back to the first Khan of Khiva have survived to our times. But of those which have reached us, the most well known is the modest fourteenth century mausoleum of Sheikh Said Allauddin, famous for its beautiful majolica tomb. Evidently, the earlier mausoleum of Pakhlavan Mahmud, the poet and national hero who died in the first quarter of the fourteenth century, was also very modest. Soon afterwards, the construction of the necropolis of the Khiva rulers was begun beside the poet's mausoleum, and the tombs of the earlier rulers were transferred there. 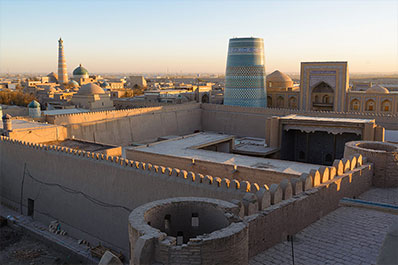 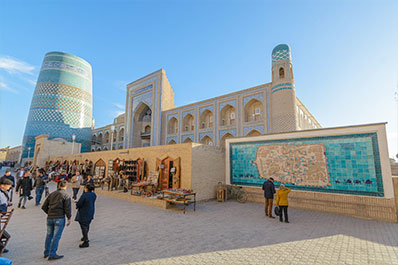 One of the main streets of Ichan Kala

In 1825, the interiors of all the chambers of the Pakhlavan Mahmud complex were faced entirely with majolica tiles, with typical Khiva patterns and the domes were covered with turquoise tiles, while the portals were also decorated with majolica. The square by the main thoroughfare of Ichan Kala was flanked by the Juma mosque, with its minaret and several madrassahs nearby.

The architecture of the Juma Friday mosque, built in the eighteenth century, is very unusual. Blank brick walls, devoid of any openings or embellishments, surround the building, which extends 55 meters in one direction and 46 meters in the other. The flat ceiling is supported by 212 wooden columns, of which 20 are very old and decorated with unique carvings.

One of the busiest parts of Khiva was its western gates, the Palvan-Darvaz. Nearby, the Anush-khan baths and the single story madrassah of Khoja Amerdibey were built in the seventeenth century.

From 1804-1812, opposite the Khoja Amerdibey Madrassah, another madrassah was built, the two-storey Kultug Murad-inak, which had 81 khujras (cells) and was one of the biggest buildings in Khiva. In 1806, a long gallery of shops with domed summits was built adjacent to the Palvan-Darvaz Gates. It was around these Gates, which marked the end of the liveliest thoroughfare in the city, that the trading life of Khiva centered during the reign of Alla-Kuli-khan (1825-1842). 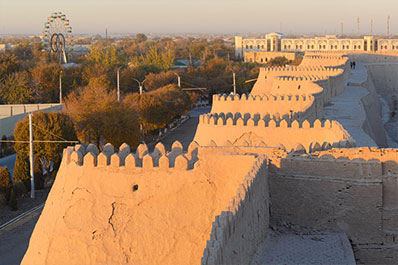 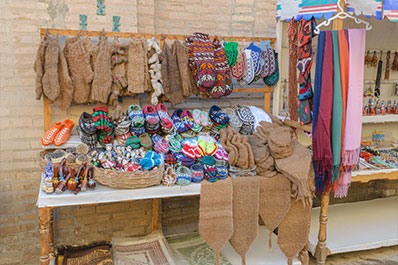 Not far from the Gates, during the same period, under Alla-Kuli-khan, a caravanserai was built, which protruded beyond the walls of Ichan Kala. A closed-in gallery passage was added to its main facade (tim). In the entire complex of structures next to the eastern Palvan-Darvaz Gates, the AlIa-Kuli-khan Madrasah is conspicuous with its fine portals.

From 1830-1838, the palace of Alla-Kuli-khan, the Tash-khauli, was built. It consists of several buildings for residential and official purposes, united by a number of courtyards. Among them are the harem, the mihmankhaneh, or khan's reception hall, the arzkhaneh, the court of justice, and a number of subsidiary and service quarters and passages. Thus, the complex around the Palvan-Darvaz Gates was completed: the gallery of Palvan-Darvaz, the Alla-Kuli-khan Madrasah, a tim, and a caravanserai on the one side; and on the other side of the square the Tash-khauli and the Kultug Murad-inak Madrasah.

By the western gates (no longer in existence) stands the Kunya-Ark, surrounded by a crenellated adobe wall - an ancient fortress with what remains of the Akshikh-baba castle, which once served as the nucleus of the city.

Other complexes were formed at Ichan Kala. To the south of the Kunya-Ark, the Amin-khan madrassah was put up in 1851 - 1852, and to the east of Kunya-Ark, the Said Muhammed Rakhim-khan II Madrassah was built in 1871; the two structures comprising an architectural ensemble around a square. 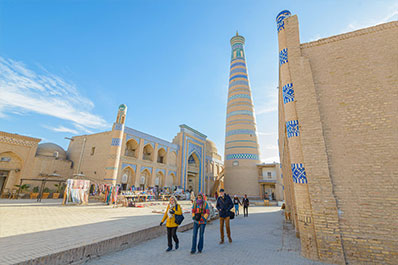 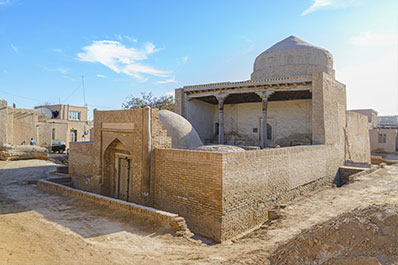 The Amin-khan Madrasah was the biggest in Khiva. The minaret, which was never completed, has a diameter of 14.2 meters and was built only to a height of 26 meters. Because of this, it was named the Kalta-minar (the short minaret). The vizier Islam Khoja built the tallest minaret in Khiva. The minaret dominates the rest of the buildings in Ichan Kala (it is 50 meters high).

The above-mentioned architectural examples in Khiva by no means exhaust the list of all the splendid structures in the city. Other buildings, too, play an important role in the general layout of Khiva. What is valuable about Ichan Kala is that it is not only the individual structures, but also the entire ensemble, organically united by its architectural and construction methods, that provides the exceptional unity of this city. This is the main reason to consider Ichan Kala as a historical and architectural reservation.

In Dishan Kala, Khiva's suburb, unlike at Ichan Kala, there are many water reservoirs and much lush vegetation, which make an attractive addition to the buildings. The mass construction of houses shows here an interesting spatial solution, of which the liwan (a covered arcade) is the most characteristic feature. The columns, beams, doors and other wooden details are frequently decorated with magnificent carvings. This native type of housing preserves and develops further the artistic traditions of Khiva. 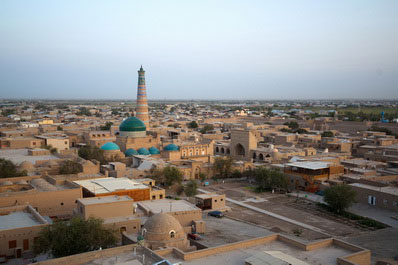 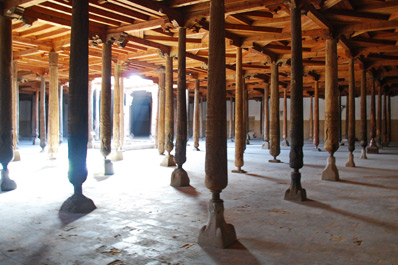 Khiva has accumulated all the best in the art of architecture and monumental painting. The architecture of Khiva has a late feudal character. When in Khiva you'll experience all the events of the past.