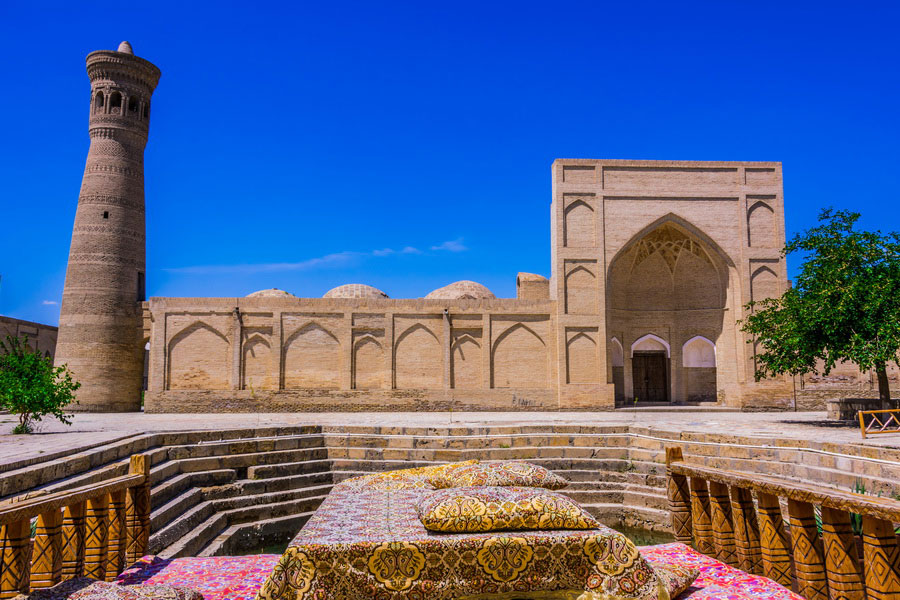 Khoja Gaukushan Ensemble in Bukhara is one of the largest complexes in the city’s historic quarters.

The development of the ancient Silk Road cities was largely dependent on trade and religious factors. Particularly in Bukhara, known as the “Dome of Islam”, this latter influence was keenly felt, and during each era of the city’s development, Islam influenced the worldview and lifestyle of its residents in a unique way.

Most of the ancient buildings of Bukhara were built for cultic or religious purposes, and the structures of the Khoja Gaukushan Ensemble are no exception. “Khoja Gaukushan” literally means “Killing Bulls”, for it was erected in 1570 on the site of a former slaughterhouse and trading grounds. The complex consists of a madrasah, mosque, minaret and a pool, or hauz.

The ensemble’s Juma Mosque was financed by an influential Juybar sheikh known as Khoja Sa’ad or Khoja Kalon (Great Khodja), who at that time was the head of the Naqshbandi Brotherhood.

The architecture and decor of the Khoja-Gaukushan Minaret resembles the famous 12th-century Kalyan Minaret, also in Bukhara, and is second only to its Kalyan counterpart in size.

The madrasah of Khoja Gaukushan Complex in Bukhara, whose architecture reflects a traditional design, was preserved in its original form until the beginning of the 20th century. Education in the madrasah was primarily religious, and thus its decor is marked by asceticism, while the outer facade boasts of majolica and tile mosaics resembling those of Bukhara’s Abdullakhan Madrasah.

Khoja-Gaukushan Ensemble is considered a significant historical sight in Bukhara today and has been the focus of recent renovation efforts in order to ensure its continued longevity.