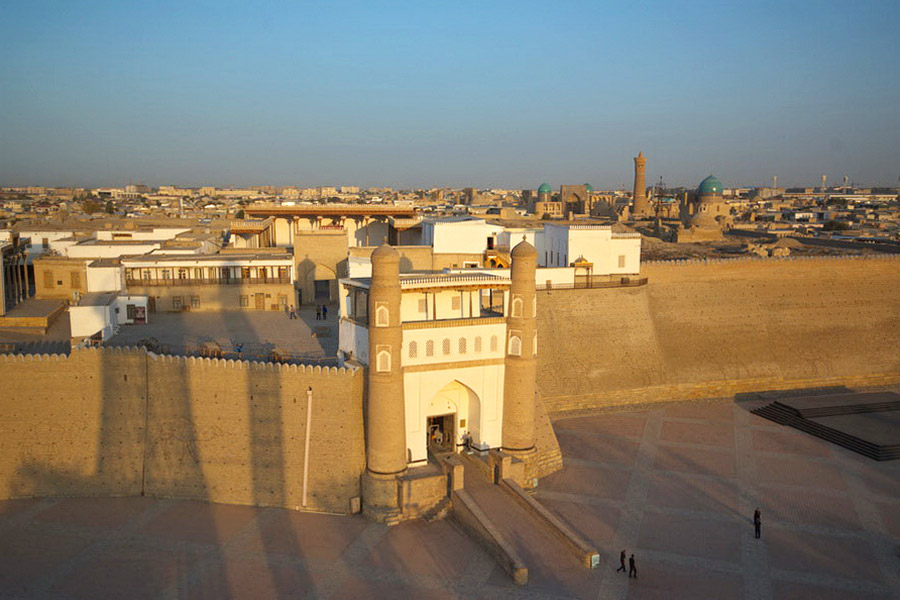 The Ark Fortress in Bukhara was the residence of the Bukharan khans and emirs, a stronghold of government and power which today stands as the oldest monument in the city.

The fortress has an area of 4.2 hectares and stands on a 20-meter-high embankment. According to legend, the citadel’s founder is the epic here Siyavush, son of Kai Kavus. Slandered by his stepmother, the young man was forced to flee Iran to the land of Turan in present-day Central Asia. At the court of King Afrosiyob, Siyavush met the ruler's daughter Farangiz and, captivated by her beauty, determined to marry her.

The king, however, was opposed to this union and attempted to trap Siyavush: He spread out a bull’s hide and demanded that Siyavush build a palace within its parameters in order to receive the hand of Farangiz in marriage. Siyavush outwitted the king by cutting the skin into thin strips, joining the ends together and building a palace inside the circle, creating Bukhara’s Ark Citadel. In turn King Afrosiyob, angered by Siyavush’s success, ruthlessly killed the young man and had him buried at the Ark’s eastern gate. 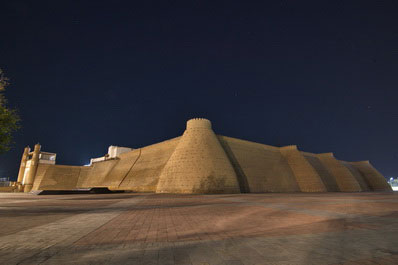 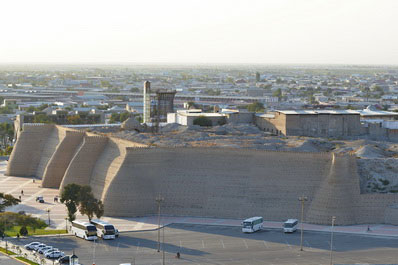 In Central Asian folklore, Siyavush was perceived as a resurrected deity. A cult formed around his name which remained active in the region long after the arrival of Islam. During the Navruz holiday, for example, the men of the city would gather at the walls of Bukhara near the hero's grave to sacrifice roosters.

Archaeological studies indicate that the territory around Ark Fortress has been inhabited for thousands of years. Although the exact date of the Ark’s founding is unknown, it is clear that it served as the seat of the city's ruling Bukhar Khudats of the Sogdian Dynasty before the invasion of the Arabs in the 8th century.

The Ark is mentioned in the "History of Bukhara" by Narshakhi (899-960): "The ruler of Bukhara, Bidun Bukhar-Khudat, built a fort, but it soon collapsed, so he summoned the sages who advised him to build a fortress on seven pillars resembling the Big Dipper. It was built as such, and the Ark did not again collapse."

As the center of the ancient city, the Ark was expanded in the 9th-10th centuries. A governor's palace, religious buildings, office, prison and treasury were added to the Ark, which by this time was already counted among the key monuments of Bukhara. A library in the Ark was opened, yet has not survived to our day. At the entrance was the reception room of the chief military commander, an arsenal and weapons workshops. Shahristan (today’s Old Town) and the handicraft suburb of Rabat developed around the fortress. To the west was Registan Square where Bolo Hauz Mosque, ministries, palaces and a bazaar were located until the invasion of Genghis Khan. 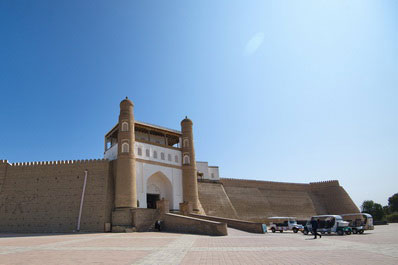 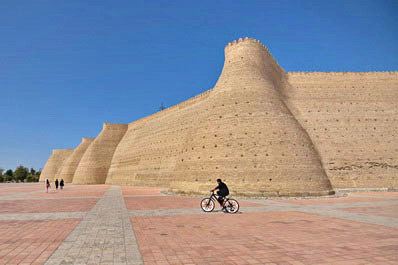 The Ark’s evolution continued for centuries, and its present-day appearance was acquired in the 16th century under the Shaybanids. A mosque, greeting hall, harem, music pavilion, jewelry workshop, clothing warehouses, treasuries and more were built. In the 17th century the emir’s throne room (kurinishkhona) was added, a brick-paved courtyard surrounded on three sides by platforms supported by wooden columns. In 1753, the Uzbek Mangyt Muhammad-Rakhim tribe captured the throne, procuring the title of emir. The Bukhara Khanate thus began to be called the Bukhara Emirate. Eight emirs of the Mangyt Dynasty ruled successively until 1920, when the Red Army invaded the city and annexed it to Russia.

The Ark Fortress in Bukhara, Uzbekistan has seen many wars and upheavals yet has resolutely stood the test of time as it continues to hold the secrets of its past inhabitants and excite the imagination of visitors.