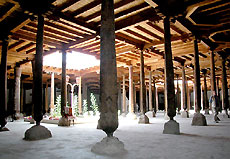 The cathedral mosque of Khiva, otherwise known as Djuma-Mosque, is located in Ichan Kala on the road leading from the gates of Palvan-darva-za to Ata-darvaza. It is a typically archaic mosque with a flat ceiling on columns which has no analogue in Central Asia. 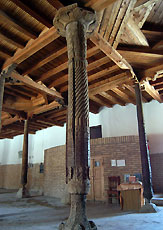 Ancient Arabian mosques had a similar layout. Today's building was constructed in the 18th century. Moonlight through three holes in the ceiling and carved wooden columns create an exclusive atmosphere for prayer. There are two hundred and twelve columns. The majority of them were carved from tree trunks in the 18th- 19th centuries. Some of them were made from ruined medieval buildings.

The most ancient columns might be taken from the medieval Khorezm capital, Kyat lay, at the bottom of the Amu Darya. Twenty one columns date from the 10th-12th centuries and have Arabian inscriptions in Kufi. Four columns reminiscent of the columns in Bagbanly Mosque with inscriptions in Naskh. The columns of the 18th-19th centuries are well recognized due to Khiva's typical floral-vegetative pattern.

The columns are leveled by means of various stone beddings and bases. The mihrab is roofed with ganch semi-dome with floral pattern of iris and brier on its sides. 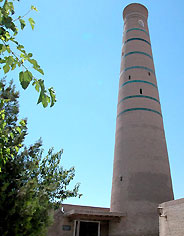 One curious fact stands out particularly, five of Khiva's minarets are located on the same line at a distance of about 200 m. The minaret of Djuma-Mosque occupies the central point. Kalta-Minor stands to the west of it, and farther, the minaret of Biki-Djan-bika. The minaret of Seyid-biy Mosque and Palvan-kari Minaret are located to the east. The diameter of Djuma-Mosque's Minaret is 6.2 m at its base; its height is 3.2 m. An eight-arch lantern with a stalactite cornice and dome crowns the minaret.