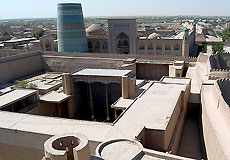 Kunya-Ark ("Old fortress") is the inner citadel of Ichan Kala. It was founded in the 17th century by Muhammad-Erenk Khan (1687-1688). Kunya-Ark had formed a "city inside a city" separated by a high wall, by the end of the 18th century. There were the Khan's mosque, residence, supreme court, reception (kurinysh-khan), powder mill, arsenal, mint, registry, harem, kitchens, stables, guardhouse and other structures. 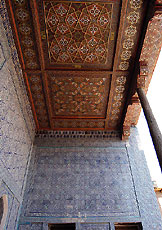 The original building of the Khan's reception (kurinysh-khana), constructed by Muhammad-Erenk, was destroyed in the middle of the 18th century when Iranian troops invaded the Khanate. Today's structures were built in 1804-1806 by Iltezer-khan (1804-1806). The throne room, with a two-column aivan, occupies the southern part of the kurinysh-khanas.

The yurt, before which the khan sat during receptions, was in the center of this room. The Khan's throne was set in a niche in the southern wall. His treasury and depository of manuscripts were located in the western part of the kurinysh-khana. The doors of the throne room were decorated with carved ganch, and the ceiling - with polychrome painting. A famous aivan is faced with blue and white majolica of magnificent ornamentation. The stone base of the column bears the lines of the Khorezm historian and poet Ogahi.

The northwestern corner of kurinysh-khana has an exit and corridor leading to the harem on the hill of Ak-Sheikh-bobo. This is the highest point of Kunya-Ark, which served as a lookout tower. 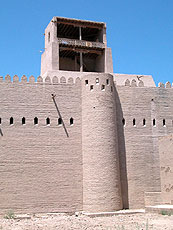 Legends say that a cell of saint Ak-Sheikh-bobo was located here in the 14th century. The Khan's harem was located under the hill and consisted of a one-column aivan and several two-storied premises. The mint and Khan's mosque were located between the harem and kurinysh-khana. 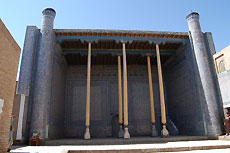 The mint was founded by Muhammad-Rahim-khan I (1806-1825) who completed tax reforms, established customs houses and started minting gold coins. The mosque was constructed at Allakuli-khan (1825-1842) to the south of the mint. While the winter hall of the mosque has a very simple decor, its summer section is very exquisite. Its aivan, with two rows of columns, is painted in dark blue, green and red colors. Its walls, mihrab and minbar, as well as small towers on the edges, are entirely faced with majolica of exquisite floral patterns.