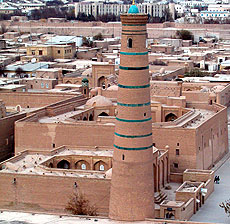 Arab Muhammad-Khan Madrasah in Khiva, located inside Ichan–Kala Fortress, is one of the oldest architectural monuments in the ancient citadel.

During his reign from 1603-1621, Arab Muhammad-Khan, the eleventh Uzbek ruler of the Shaybanid Dynasty, made huge contributions to the advancement of Khorezm. He arduously sought to develop the city of Khiva and erected multiple new buildings for civil and religious purposes. Thanks to his efforts, Khiva acquired a reputation as one of the most beautiful cities in Central Asia, a status which it still holds to this day.

Arab Muhammad-Khan Madrasah was built by this ambitious ruler in 1616 in honor of the appointment of Khiva as the capital of Khorezm. The structure differed from other religious schools of its time in terms of its severe and simple design offset by rich décor.

Over the course of its 400+ years of existence, Arab Muhammad-Khan Madrasah has been restored multiple times. During the reign of Allakuli-Khan, the dilapidated school was rebuilt in accordance with 19th-century standards – changes were made above the portal to the entrance, and a second floor, new classrooms and cells were added.

Despite extensive renovation efforts, the madrasah’s original design, portions of its ceiling and its 17th-century carved wooden pillars have been preserved to this day.

Arab Muhammad-Khan Madrasah in Khiva remains an important landmark in Ichan-Kala, a vital link to the city’s past which still evokes admiration from visitors to Khorezm today.