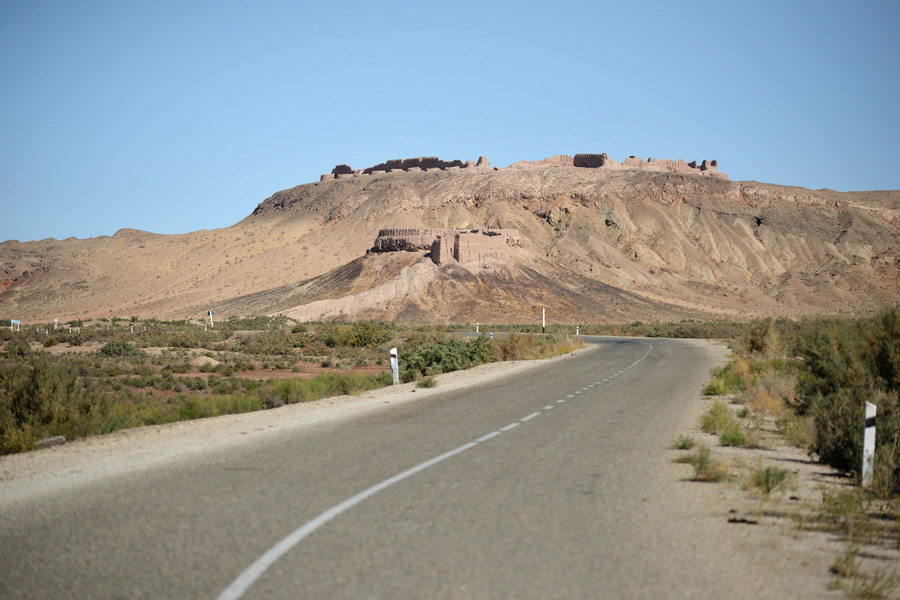 Uzbekistan is the guardian of some of the oldest remnants of ancient civilization, and many of these findings are located in its western Republic of Karakalpakstan. Ayaz-Kala is the largest fortress of the UNESCO-recognized Desert Castles of Ancient Khorezm in Karakalpakstan. Built in the 4th century BC during the height of the Kushan Empire, it stands frozen in time as one of several significant monuments to Zoroastrianism which dot the landscape.

Ayaz-Kala was discovered in the mid-20th century by an archaeological expedition led by Sergey Pavlovich Tolstov. The castle keeps watch over the Kyzylkum Desert on a forlorn cliff some 20 kilometers northeast of Toprak-Kala, ancient capital of Khorezm, and 70 kilometers from Khiva. The site was selected due to the cliff’s naturally flat top which, at a height of 60 meters, allowed for easy surveillance of the desert. The fortress is protected by a huge plateau on the east and by steep slopes on its remaining three sides. It overlooks Ayazkol Lake, the surface of which now resembles a crust of ice but which is actuality excess salt. 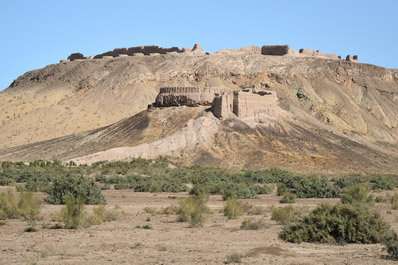 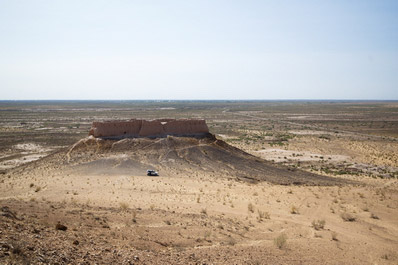 Ayaz-Kala is part of a system of ancient border fortresses which ran from east to west at a visible distance from one another and served to protect the oasis city from desert marauders. In addition to the fortresses, rural settlements consisting of several residential buildings surrounded by a low brick wall and a separate 15-room house which likely belonged to a wealthy official or military leader have been unearthed in the region. All of this evidence indicates that 19 centuries ago, the western border of the Kushan Empire was concentrated here.

During excavations, Tolstov’s team divided the settlement into three main sections. Ayaz-Kala 1 is a rectangular military fortress which served as a stronghold for protecting the borders of the Kushan Empire from the raids of its northern nomadic neighbors. The preserved mud brick walls reach 10 meters in height and the citadel itself occupies almost 3 hectares of land. Among the most significant discoveries at Ayaz-Kala 1 are inscriptions in the ancient Khorezm language, metal remnants of arrows and spears, iron daggers and precious items made of gold and bronze. 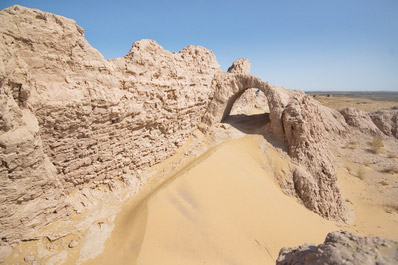 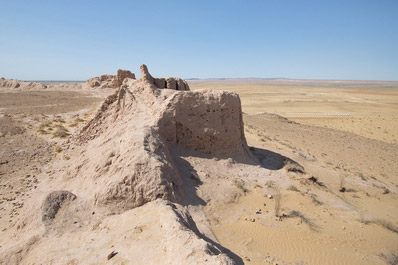 Ayaz-Kala 2 is located west of Ayaz-Kala 1. It was built later, likely in the 4th century AD, and is regarded as the most beautiful building in Central Asia hailing from that time period. Among the discoveries at Ayaz-Kala 2 were a Zoroastrian fire temple, ceremonial halls with columns and ancient Khorezm coins. Its luxurious wall paintings were all destroyed by fire, and although it was rebuilt in the 6th-8th centuries, little has survived from its former grandeur, for the 13th-century Tatar-Mongol invasion that decimated ancient Khorezm did not spare the palace.

Ayaz-Kala 3 is the largest building of the complex and is located below the others. It was fortified with watchtowers and powerful entrance gates and was likely built to protect the farmers who cultivated the fields outside its walls. It is believed that Ayaz-Kala 3 was built in the 2nd-3rd centuries AD along with Toprak-Kala, another desert castle of ancient Khorezm. It was subsequently destroyed by nomads in the 5th century. 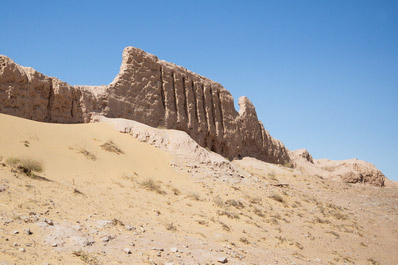 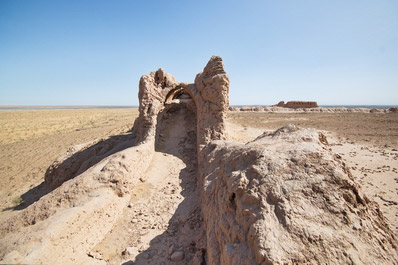 Although much has been discovered about Ayaz-Kala and its role in the history of Khorezm, the origin of its name remains a mystery. Some theorize that “Ayaz-Kala” meant "Fortress in the Wind", while others believe that it was derived from the name of a mythical hero. Many legends are associated with Ayaz-Kala, and hearing these myths retold is a part of the experience of visiting the site.

If you are planning a trip to Karakalpakstan, a trip to Ayaz-Kala is sure to be a highlight. Not far from Ayaz-Kala is a yurt camp where you can spend the night and get a taste of the life of peoples who have been wandering this desert for centuries.