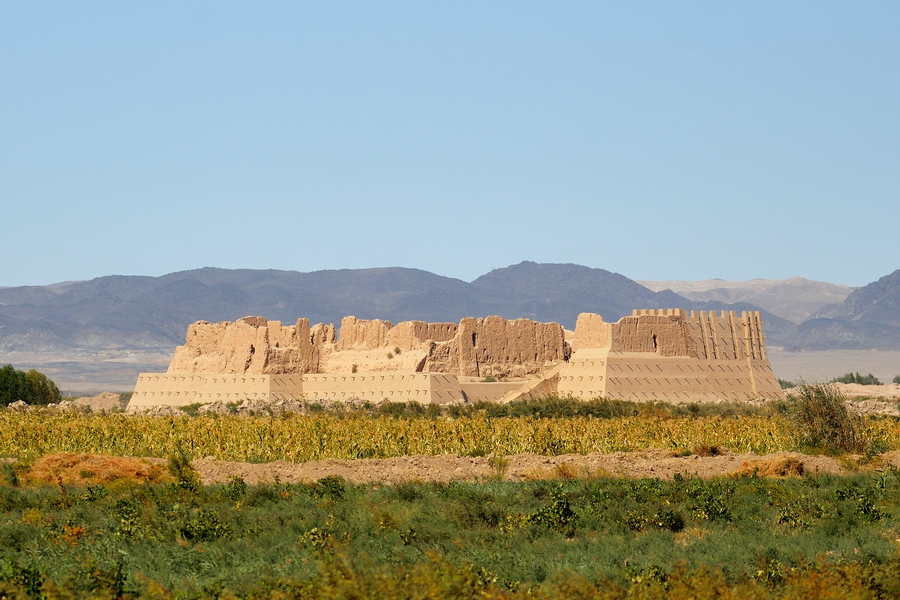 Kyzyl-Kala Fortress, one of the oldest monuments in Uzbekistan’s Karakalpakstan Region, confirms the existence of a once-powerful and developed civilization in the Kyzylkum Desert. The outpost, whose name aptly means “Red Fortress”, remains steeped in legends which awaken near-visible images of the life which once transpired on this desolate site.

Kyzyl-Kala, located 80 kilometers from Nukus and 3 kilometers from Toprak-Kala, forms a link in the Ellik-Kala chain of citadels better known as the Desert Castles of Ancient Khorezm. It was built between the 1st -4th centuries and functioned until the Middle Ages, when a combination of natural occurrences and enemy attacks precipitated the citadel’s demise.

Kyzyl-Kala lay buried in the desert sands for centuries before being discovered by archaeologist Sergei Pavlovich Tolstov in 1938. His excavation team determined that the castle was likely an auxiliary outpost of Khiva, capital of Ancient Khorezm. Material goods linked to the Great Silk Road ​​which were discovered on site led them to the conclusion that the fortress was once a stopping point for caravans laden with valuables. According to legend, an underground tunnel connected nearby Toprak-Kala and Kyzyl-Kala, although excavations have been unable to confirm this. Yet another legend claims that a storehouse of treasure which was guarded by snakes and supernatural forces lay hidden in the fortress, a tale which likely arose after valuables were left behind by wealthy residents during their hasty evacuation of the city. 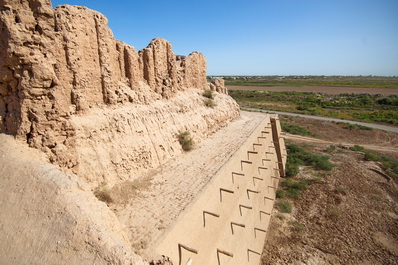 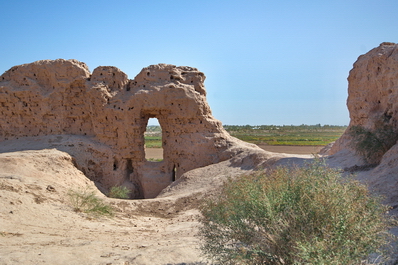 For centuries, Kyzyl-Kala Fortress served as a refuge for local inhabitants during nomadic raids. Smoke signals would be used to announce the approach of enemy armies, giving the Khorezmians adequate time to prepare for battle and seek shelter within the citadel, which was surrounded by a double wall fortified at the corners by watchtowers. Ceramic pipes were even installed to funnel a continual supply of water to the fort. The multifunctional citadel included residential quarters divided into sections, a Zoroastrian temple and a main street which ran through the city center and dead ended at the temple. Numerous rooms richly decorated with frescoes, expensive dishes, jewelry, bronze lamps and other relics have all been unearthed at the site, giving us glimpses of the peaceful life which once defined Kyzyl-Kala.

It is believed that tragedy first struck the region in the early Middle Ages when the Amu Darya changed its course, forcing residents to temporarily abandon their crops and the region. In time, however, Kyzyl-Kala was rebuilt and managed to thrive until the 13th-century invasion of the Mongol army, a ruthless enemy who proved to be the downfall of the mighty outpost. Unable to withstand the onslaught of the Mongol troops, Kyzyl-Kala was forever abandoned and destined to lay in ruins for generations to come.

Recognizing the significance of Kyzyl-Kala Fortress, specialists undertook to restore it in the early 21st century. Many secrets still lie buried in its sands, and visitors to Karakalpakstan today can have the thrill of discovering history for themselves on a visit to one of the most famous Desert Castles of Ancient Khorezm.