Toprak-Kala served as the seat of the ancient capital of Khorezm, Uzbekistan nearly 2000 years ago. As the only fully excavated fortress of its kind in Karakalpakstan Region, it is one of the most unique sites in all horezm.

Toprak-Kala, whose names translates as "Sand Fortress" or "Earthen Fortress", was a fortified palace and settlement founded between the 1st-5th centuries AD. It stands adjacent to the Sultanuizdag Range in the Ellik Kala District of Karakalpakstan, approximately 12 kilometers from the village of Buston. Toprak-Kala is a significant stop along the Ellik Kala (Fifty Fortresses) cluster, better known as the Golden Ring of Ancient Khorezm. 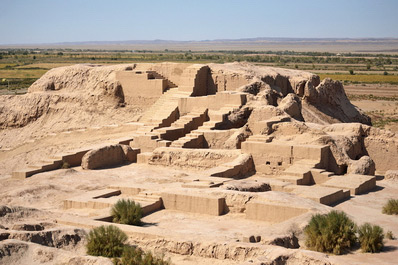 At the beginning of the 1st millennium, Toprak-Kala served as the residence of the Khorezm shahs for centuries before being abandoned and falling into disrepair in the 5th century. The once-powerful fortress lay buried under the sands of the Kyzyklum Desert until 1938, when an archaeological expedition led by Sergei Pavlovich Tolstoy uncovered this astounding treasure of antiquity. Their findings have allowed us to peer into ancient Khorezm through the lens of the walled city of Toprak-Kala.

The skill and ingenuity of the Khorezm fortress architects is nothing short of impressive. Stretching 500 meters long and 350 meters wide, Toprak-Kala was fortified with 12-meter-thick walls and watchtowers standing 20 meters tall. More than 2,500 people once lived in Toprak-Kala, whose layout included busy streets, shopping malls, numerous houses stretched across an area of ten blocks and a Zoroastrian fire temple situated in the city’s southeastern corner. Dominating the northwestern quadrant was a three-story palace which one housed a throne room, an additional 150 rooms and a three-towered building up to 30 meters in height. 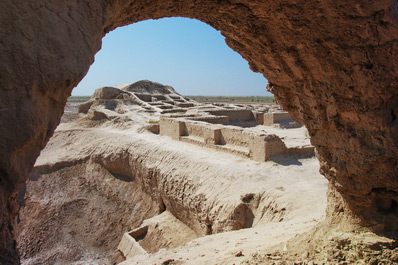 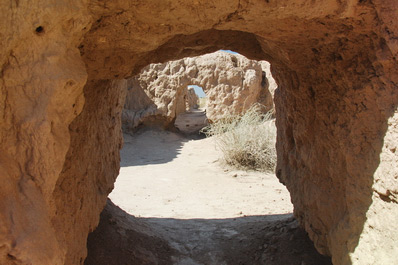 Inside Toprak-Kala, archaeologists have discovered coins, ceramics, woolen and silk fabrics, fragments of burial vessels, gold jewelry, household utensils, unique sculptures, paintings and writings in the ancient Khorezmian language. Household documents dated to the 3rd century AD have even been found in the palace.

Toprak-Kala may be remote, but its air of mystery and historic significance make it a truly worthwhile and unforgettable stop during your Uzbekistan travels.