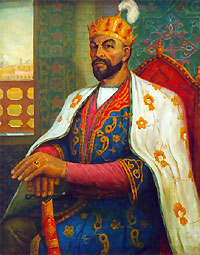 Tamerlane (Amir Timur, Timur the Great) (1336-1405) was a man of a complex, multi-faceted personality. He forged his own destiny and became a prominent historical figure.

It was near Samarkand, in the town of Kesh, which later was given the name Shakhrisabz, Shakhrisabz ("a green town"), where in 1336 to the chief of a small tribe was born a son.

The boy was named Timur. The wounding of his right leg by an arrow made him lame. That is why he is known as "Lame Timur" or "Tamerlane" in English. 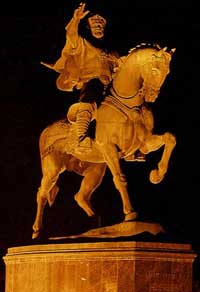 From his youth he appeared on the political scene as an active politician and military figure. Having become the ruler of Samarkand he built a great army and carried on many annexationist campaigns. Thus he expanded his empire that stretched from the Volga River and the Caucasian ridges in the west to India in the Southwest. But the center of the empire was in Central Asia. Tamerlane wanted to designate his hometown, Shakhrisabz, as his capital, but certain political considerations forced him to leave with Samarkand the loving moniker of "Shining Star of the Orient".

Tamerlane made an outstanding contribution to the national state system, education and culture, and general development of his state. He promoted the construction of monumental historic buildings, especially in Samarkand. Some of them can be seen today. The inscription on the portal of Tamerlane's Palace Ak-Sarai in Shakhrisabz, reads "If you doubt our might, look at our buildings". The impressiveness of the architecture was aimed at the demonstration of the greatness of the empire. All possible means and every effort were exerted to construct these magnificent buildings. A vast range of building materials from neighboring regions, famous architects, suppliers, and a great number of workers were brought to work. Different specialists were taken from occupied lands. 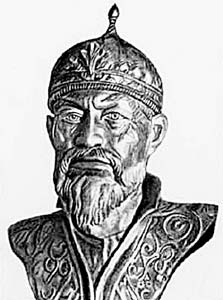 During the entire 14th century there were many experienced architects and artists gathered in Central Asia, most of them particularly in Samarkand. Skilled craftsmen from Iran, Azerbaijan, Khorezm, and India were invited without hesitation. Both foreign and local masters realized the great importance of the projects. They represented different arts and crafts which were mastered by others. They adopted each others' styles, which combined into a completely original type of design.

Tamerlane's political status required him to have friendly relations with the leaders of many religions.

Such relations were established by constructing mosques, madrassahs, and especially mausoleums. Many of them, for example the Juma Mosque, Gur-Emir Mausoleum and Shahi-Zinda Architectural Ensemble, all in Samarkand, and the Dorus-Siadat Mausoleum in Shakhrisabz, Chashma-Ayub Mausoleum in Bukhara, and Hadji-Ahmad Jassaviy Mausoleum in Turkestan, have stood the test of time and can be seen today.