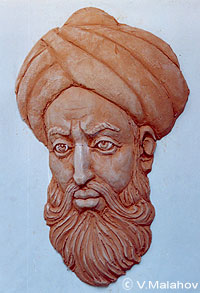 Abul Abbas Akhmad ibn Mohammed ibn Kasir al-Fargani, a great astronomer, mathematician and geographer, is known in Europe under the name Alfraganus, and in the Orient as Khasib, which signifies "mathematician". There is an extreme scarcity of biographical information on him that has lasted to the present, it is solely his work, "nisba", which points to the fact that he was a native of the Fergana valley. Truly, biographical information on him is far from sufficient. But the scientific works of Al-Fargani forever have immortalized his name, and gained him a world wide reputation.

Akhmad Al-Fargani was one of the pleiad of scientists of the so-called "House of Wisdom", an establishment founded in the ninth century by the caliph, Al-Mamun. This large center of science had another name, too: Al-Mamun's Academy. At first in Merv, thereafter in Baghdad, scientists personally invited from Khorezm, Fergana, Sogdiana, Shash, Farab, Khorasan carried out scientific investigations. There were established two observatories, equipped with the best astronomical instruments of that age. Astronomers of Al-Mamun's Academy measured the circumference of the Earth, the length of a degree of the terrestrial meridian, carried out observations of the celestial bodies, compiled Zijs (tables), and wrote scientific works. At the time of his work in Egypt, he created his celebrated "Cairo Gauge of the Nile, the Nilometer" that was a measuring implement of the Nile waters, which has kept its scientific value to the present day: the Nilometer was in use up to the time of the construction the Aswan dam.

However, the principal work of Akhmad Al-Fargani has passed to us in three titles: "A Book of Celestial Movements, and a Summary of the Science of the Stars", "The Thirty Elements", and "Theoretical Computations on a Sphere"; the latter treatise is one of first works in the Arabic language on astronomy. The scientist gave in it a concise brief of astronomy, mainly on the basis of the work of an Alexandrine scientist, Claudius Ptolemy (2nd century AD) "The Great Mathematical System of Astronomy".

What is of special importance is that at the end of the book, Al-Fargani placed a table of known geographical points, having allocated them in accordance with the seven climates from the east westward with an indication of their coordinates. Thus, thanks to Fargani, westerners very early on became acquainted with the nature of the astronomical research of Mamun's academy. A great scientist of the Orient, Al-Fargani, not only "re-checked" the exactness of Ptolemy's data, defining it more accurately and correcting much other astronomical data which had appeared formerly, but also, proceeding from observations of heavenly bodies, scientifically substantiated the globosity of the Earth and foretold the solar eclipse of the year 812.

In the twelfth century the "Book of Celestial Movements and Summary of the Science of the Stars" was twice translated into Latin, and in the 8th century into Castilian and Old French. In 1669 a Dutch Arabic scholar and mathematician, Jacob Golius, created a new Latin translation.

"A Book of Celestial Movements and Summary of the Science of the Stars" was regarded in the Orient and especially in Europe as the greatest encyclopedia of astronomical knowledge.

Familiar with the book of Alfraganus' was the great Italian poet Dante (1264-1321). His greatest work "The Divine Comedy" is much indebted to oriental science. The purgatory described in the Comedy is placed by the author on a mountain in the Western hemisphere of the Southern hemisphere of the Earth. And, you see, it was Al-Fargani who, when studying the disposition of the stars, arrived at the conclusion that there was an unknown continent in the west, and he gave a description of that continent's sky. The purgatory from "The Divine Comedy" is under identical constellations.

An Italian cartographer, Amerigo de Vispucci, who had arrived in the end of the 15th century in "India" discovered by Columbus, that is to say, in the southern part of that continent, saw the stars in the sky - the ones described by Dante. "We have arrived in the purgatory of Dante!", - he exclaimed. The continent, being unknown to the world at that time, was given an appellation of his name. So our compatriot, the great scientist of the Orient, Al-Fargani, prophesied the discovery of America.