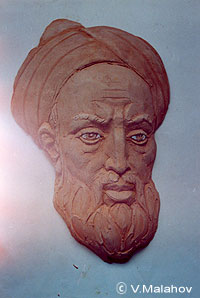 Abu Ali ibn-Sina (Avicenna) was born in the year 980 in the settlement of Afshana near Bukhara into the family of a financial official.

As early as his childhood, ibn-Sina, along with his father, arrived in Bukhara. He familiarized himself with the Koran in his very early days, and did the same with Greek philosophy, geometry and Indian calculation.

Ibn-Sina's scientific interests evolved in two directions: medicine and philosophy. By the age of seventeen he had become a fully developed scholar and had achieved great prestige as a physician.

Once he was invited to the sick Nukh ibn-Mansur, who ruled Bukhara, and cured him. In reward, Ibn-Sina received permission to use the palace library.

After the overthrow of the Samanids and the capture of Buhkara by the Karakhanids (between 992 and 999) ibn-Sina went to Urgench, to the palace of the Khorezm Shah where a good number of prominent scholars worked.

At that time in Khorezm, ruled Abui-Abbas Mamun (999-1016) who patronized scholars, poets and painters.

Ibn-Sina's philosophy, expounded in the "Kitab ash-Shifa" ("The book of healing"), is a whole epoch in the history of oriental philosophy. However, it is his classic consolidated work on medicine that has gained him a world reputation, "Kitab al-Kanun fit-Tib" (The canon of medical science). The translation of this work into the Latin language was made at the end of the 15th century among the incunabula. In one hundred years, in 1593, its Arabic edition was published in Rome. Afterwards, it was to be published many times up to the 17th century, and became one of the most popular works on medicine in the West. Western medicine was directly impacted by the Canon.

Of the medical practice of ibn-Sina legends were composed. One of them goes that after death he left his apprentices forty ampoules with orders to give him daily infusions of one ampoule during forty days. When the apprentice injected the 39th ampoule, he saw that the teacher's cheeks blushed pink, his lips turned crimson, and his hair and moustache blackened so it looked as if he were at the point of opening his eyes any moment. The apprentice became so agitated in the expectation of the resurrection that he dropped the last, fortieth ampoule, and it smashed.