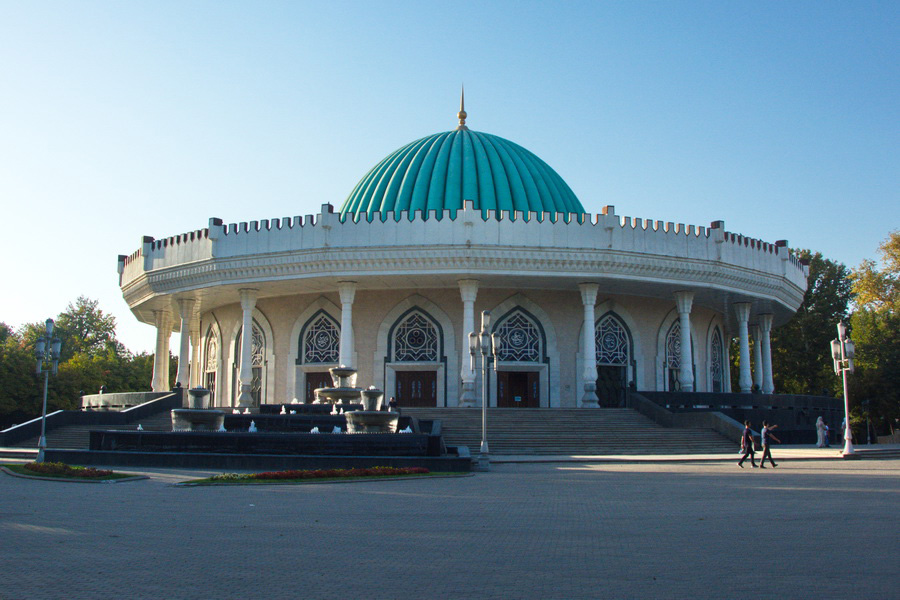 State Museum of History of Timurids opened in Tashkent on 18 October, 1996. The museum was placed in the centre of Tashkent for the 660-year anniversary of Amir Timur, and has an unusual shape, in the shape of a dome, in accordance with the style of famous local landmarks.

From the early days of its existence, the museum has become a centre of scientific thought and education; its exhibits are of great historical value. These include jewellery, weaponry, military attire and regalia, musical instruments, manuscripts, personal effects of  Amir Timur,  Babur, astronomical instruments of  Ulugbek and many other cultural treasures dating back to the Timurids era.

The museum building represents the synthesis of medieval, or more exactly, the Timurids epoch and modern architectural styles. It has a circular form with ribbed dome decorated with blue majolica, parapets on the roof, open aywan and orderly pillars. White marbles were used in the decoration of pillars, floor and front stairs. The inner side of the dome is designed in accordance with the best traditions of the eastern architecture. Decorated with refined ganch-carving it is covered with thin layer of gold leaf.

The building has three floors. The ground floor is allotted for office facilities. The first and second floors are at the disposal of the museum’s exposition. The copy of the remarkable holy book of Muslims Osman’s Koran is placed in the center of the main exhibition hall.

A big picture in miniature style entitled as Great Timur – Outstanding Creator made by the group of Uzbek artists in 1996 is impressive as well. The picture reflects the life of Amir Timur from his birth till death. The falling star is depicted in there symbolizing the translation of his name Sohibqiron - “born under a lucky star”. Besides, this part of the picture has such symbols as the sacred bird Humo embodying happiness and freedom, the falcon embodying the birth of a child and his high rises.

The second part of the picture represents the creative activity of the great ruler, sublime constructions: Ak-Saray palace in Shakhrisabz and Bibi-Khanym Mosque in Samarqand. The third picture depicts the last days of Amir Timur’s life, his burial vault – Gur Emir Mausoleum. In general, the picture is tracked by the river that unites all three part of the canvas. The running river embodies the tempo of life of great Sohibqiron.

The depository of the museum keeps over 3 thousand exhibits reflecting the history and culture of Uzbekistan, including the epoch of Amir Timur and Timurids that is subdivided into collections on archeology, architectural de'cor, archeological metal, stone, glass, ethnography, arming tools, manuscripts and miniature. For instance, the set of arming tools includes chain armor, helmets, maces, pole axes, various arrowheads, and many other things. The most distinguished item of the exhibition of archeological metal is the bronze jar with epigraphy of the period of Amir Timur. Golden, silver and bronze wares, dishes, jewelry, ceramic items could serve as the other evidence tha Amir Timur was not only a great statesman but a patron of the science, workmanship, spiriluality and enlightenment. Silver and copper coins depicting head of Amir Timur as well as names of representatives of the Timurids dynasty are of a great value as well. The auxiliary fund consists of 2010 items. These are books, manuals, various gifts, catalogs, souvenirs, items from Gur Emir Mausoleum, models of such architectural monuments as Bibi-Khanym Mosque, Ak-Saray palace, Gur Emir Mausoleum, Ulughbek madrasah, and others. Items related to the development of science, culture and establishment of diplomatic ties occupy a special place in the exposition. These are medieval manuscripts, photocopies of letters, scientific treatises, publications on Amir Timur and his epoch, as well as the model of the celestial globe of Ulughbek.

For fourteen years of operation the museum has become one of the most popular and attractive places for people’s visit. Over 1, 5 million people have visited the museum for the last years.

With each year the exposition of the museum replenishes with new interesting exhibits indicating the diverse personality of Amir Timur and rich heritage of Timurids that represent genuine interest for the scientists across the globe.