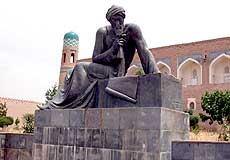 One of the most famous scientists of Khorezm and, possibly, all the Muslim world was Abu Jofar Mohammed ben Musa al Khorezmiy al Majusi al-Katrabbuli. He was born approximately in 783 on the outskirts of Khiva in the village of Raml. His ancestors were Zoroastrian exorcists. In 809, he was one of the scholars at the court of Al-Mamun, the ruler of the Eastern province of the Caliphate and a patron of the arts of Merv. In 819, accompanying Al-Mamun, who had become by that time the Caliph, Al-Khorezmiy went to Baghdad and lived in the suburb of Kattrabbula for the rest of his days.

In Baghdad, Caliph Al-Mamun nominated him head of the House of Wisdom, the first and largest scientific center of the Middle Ages. The center was later called the "Academy of Al-Mamun". The observatories of the House of Wisdom carried out regular observations of heavenly bodies. Here was carried out exegetic and research work, and concurrently, in different regions of the caliphate, were organized research expeditions. Mohammed Al-Khorezmi carried out the coordination and administration of that work from 829.

He wrote more than 20 research works, the most famous of which is the "Concise Book of Calculus in Algebra and Almukabula". It was translated into Latin in the twelfth century; its Arabic and Latin variants have been preserved. Al-Khorezmiy wrote "A Book of Indian Calculus", a work known in the Latin version translated by Adelard Bat in the 12th century; he also wrote the Zij - renowned astronomical tables. The tables were translated into Latin, and those Latin manuscripts remain preserved. Al-Khorezmiy also wrote "The Book of Survey of the Orient" represented by the one and only Arabic manuscript in Strasbourg, France. The manuscript was re-copied in 1037. Fragments of his "Book of history" in Arabic still exist.

These works of Mohammed Al-Khorezmiy, especially the examples on astronomy and mathematics, tremendously influenced the development of science and culture.

In his "Book of Indian Calculus" the author, for the first time in science, describes the arithmetical operations of decimal positioning, based on nine digits and zero, presently in use on a world-wide scale. He was the first to describe the concept, written in Latin language as "algorithm" which signifies "a constant calculating process". Algorithm is one of the basic concepts not only of mathematics, but also cybernetics.

In the "Concise Book of Calculus on Algebra and Almukabula" Al-Khorezmiy was the first to define and represent algebra as a science. He submitted six canonical types of linear and square equations and basic methods of solving them, methods which are still used. The word "algebra" was Latinized from the Arabic word "al-jabr", which is evident from the Arabic title of the treatise. The word stands for "filling in" - one of the fundamental operations in algebra at that time.

In the astronomical treatise "Zij", Al-Khorezmiy took the meridian of the Arina cupola as the initial meridian from which counting time was carried out. The cupola was identified with the Indian town of Uzain (today it is Ujain in the state of Uttar Pradesh - India). The theoretical fundamentals of Arina were reflected in "The Notion of the Earth" by Peter Aya (written 1410, printed 1480-1487). Christopher Columbus also familiarized himself with that theory. From marginal notes of a copy of that book, one can see that he believed there to be another, even higher cupola than the one in India, on the exact opposite side of the Earth from the Arina cupola. The search for the second cupola led Columbus to the discovery of the New World.

The systematic scientific ideas of Al-Khorezmi which were expounded in his works contributed to the development of science in Europe.

Sculptor S. Babayan depicted mathematicians at the time of in-depth reflection on another treatise, represented in the form of scroll, a long involute side whose pull-down with stones to the ground.