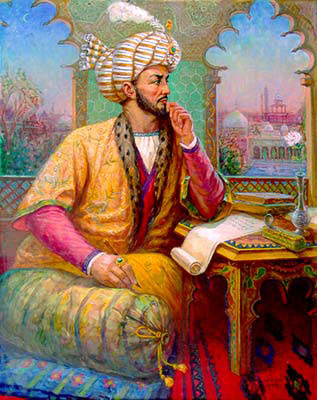 Zakhritdin Muhammad Babur was born on 14 February 1483 in Andijan, in the family of the ruler of Fergana, whose name was Umar Sheikh Mirzo. At the time in Central Asia and Khurasan, a fierce internecine war between relatives and descendants of the Great Tamerlane, were being fought.

Zakhritdin, being from his childhood in love with literature, art, and nature's beauty, as all princes of the Timurids, received education in the basics of these subjects under the instruction of the eminent teachers in his father's palace. But his untroubled childhood didn't last long; after his father's death in 1494, Babur, aged 12, sitting on the throne of the ruler of the Fergana Ulus, was forced to struggle for Andijan's throne against his brother Jahongir Mirzo, uncles Sultan Ahmad Mirzo and Sultan Makhmud-Khan and other feudal groups. To reconcile with his brother, Jahongir Mirzo, Babur divided the Fergana Ulus and give away him exactly half. Then Babur entered into a struggle against the feudal groups for Samarkand. The conqueror, Shebani-Khan, who possessed an enormous military, compelled Babur to leave Samarkand. After the conquest by Sheibani-Khan of Andijan in 1504, Babur set off for the south and based his rule in the Kabul Ulus. Between1505 and 1515, Babur several times tried to return to Central Asia. But these attempts proved to be futile. Later, with the purpose of strengthening his power, in the space of the period 1519-1525 Babur led an aggressive struggle against India. In 1526-27 he conquered it. The power of the "Baburid dynasty", known in Europe as the "Great Mughal Empire", lasted in India for more than 300 years.

After that victory, Babur didn't live long; he died in the town of Agra in December 1530; later, according to his testament his remains were carried by his descendants to Kabul and buried there.

Babur, during the short time he ruled the state, promoted the stabilization of the political situation in India, unification of Indian land, improvement of towns, organization of trade relations, and the planting of trees, shrubs and gardens. The building of libraries and caravanserais was widely practiced, especially in the years of his sons' and "descendants" governance. The Central Asian style appeared in the arts and architecture of India.

Javaharlal Neru wrote that, after Babur's arrival to India, big changes had taken place there, and the new reforms improved life and enriched the arts and architecture.

Side by side with the enormous State affairs, Babur wrote literature in India and created his most exclusive work, "Baburname", which became popular all over the world.

"Baburname" is a book including not only historical facts but unique information on economic, political and social aspects, nature and geography; information which is of tremendous world importance in the capacity of a unique historical and literary heritage.