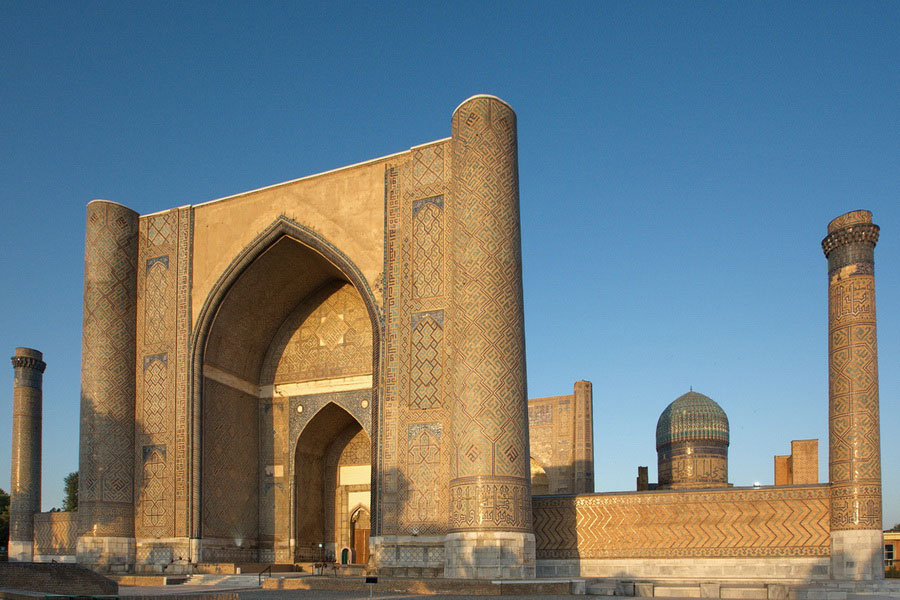 Bibi-Khanym Mosque was constructed to mimic the design of the Amir Timur cathedral mosque of Samarkand. It was intended to out-rival everything he had ever seen. Architects, artists and craftsmen from conquered countries were involved in the construction of this grandiose complex. Elephants were used for lifting and transporting heavy loads. The mosque was constructed over five years. When Timur returned after his western campaign, he was very disappointed by the construction and ordered the reconstruction of the portal, which he deemed not high enough.

In the end, the cathedral mosque was given one of the greatest portals of that era. Its arch was flanked with powerful pylons, with minarets up to 50m in height. The front entrance had bronze doors with the inscription: "The sound of these huge doors, made from the alloys of seven metals, calls the prayers of seven climates into the house of Islam". The gates were taken away from Samarkand by Iranian Shah Nadir in 1740. Above the portal there was an inscription: "The dwelling of creatures is all hypocrisy, falsehood and passions. Everything is concentrated at the threshold of the Lord's hall - and only there..."Today, the marble lectern for the tremendous Koran made at Ulugbeg stands in the center of the courtyard. The cathedral mosque of Samarkand was named after the oldest wife of Amir Timur, Bibi-Khanym. She was Sarai Mulk-Khanym, a daughter of Kazan-khan (1343-1346). In the 1340s, Kazan-khan and his brother, Halil-suitan, subordinated Maverannahr and southeastern Khurasan. However, soon they suffered defeat at the hands of Chagataid amir Kazagan (1346-1358). Sarai Mulk-Khanym became the wife of Emir Hussein, the grandson of amir Kazagan, who was a supreme Chagataid governor in 1364-1370. Amir Timur made Sarai Mulk-Khanym his wife when he dethroned Hussein. That gave him the honored title of Guragan - "Khan's son-in-law". 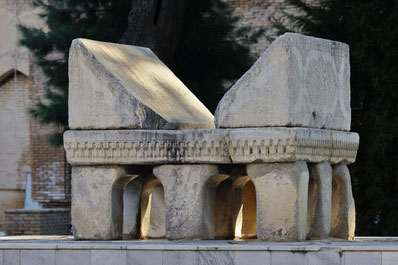 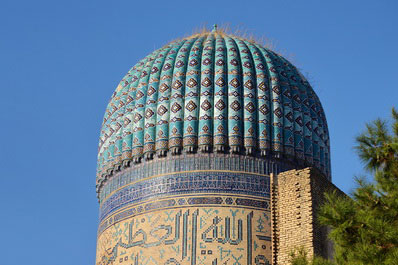 A large madrassah had been located opposite to the cathedral mosque until the middle of the 18th century. It had carried the name of Bibi-Khanym too. Originally, the madrassah's portal was so large that it competed with the cathedral mosque. It made Amir Timur angry and he ordered its reconstruction. The madrassah was destroyed during the invasion of Nadir-Shah. There is a mausoleum on the central axis of the madrassah. It is a tomb of Sarai Mulk-Khanym's mother and two other women from her family. This is a high octahedral structure with a cylindrical drum, bearing a Kufi inscription. The interior is decorated with mosaics and floral ornamentation, including landscapes of the garden of eden.