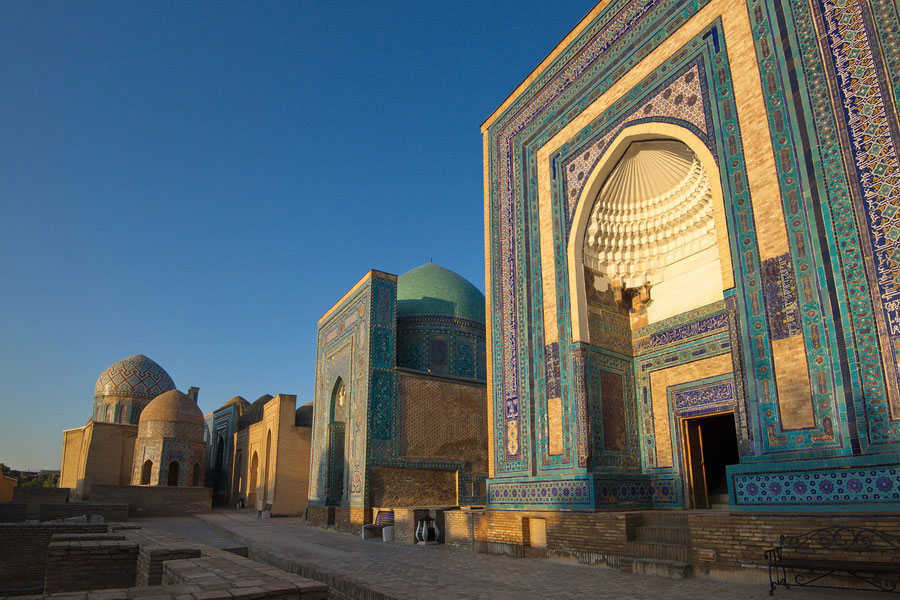 The genesis of the Shahi-Zinda necropolis on the slope of Afrasiab hill is connected with Kusam ibn Abbas, the cousin of the Prophet Muhammad. We know that he took part in the first Arab campaigns to Maverannahr. According to legend, Kusam was mortally wounded on the walls of Samarkand and escaped underground, where he continues to live, hence the name of the necropolis, Shahi-Zinda - "living king". The martyr Kusam ibn Abbas had obtained the status of Islamic saint and patron of Samarkand by the 10th-11th century. During the 12th-15th centuries, a complex of mausoleums and mosques grew along the path leading to Kusam's mausoleum, which exudes exquisite beauty as if denying death itself. 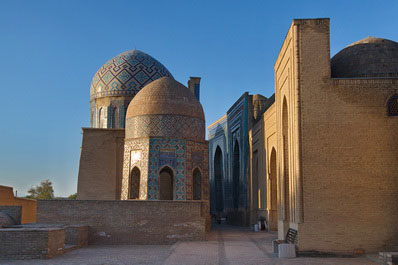 Structures from the 11th century form the core of Kusam ibn Abbas Mausoleum. First of all is a small domed tomb. The ceramic stepped gravestone, which was installed by Amir Timur in the 1380s, occupies almost half of its area. The third step bears a citation from the Koran, establishing the name of the necropolis: "Never consider the dead those who were killed on the way to Allah. No, they live!" Near the tomb is a big memorial room with a mihrab in the western wall. A room for forty-day solo prayers is located under its floor. A small minaret of the 11th century is located by the entrance. Chronologically, Shahi-Zinda developed from north to south. In the 1340s, Khodja-Ahmad Mausoleum was built on the northern edge. The inscription on the mausoleum reads: " ...so let Allah prolong their eternity to make the tomb a garden of happiness for Khodja Ahmad..." In 1361 the mausoleum of a married noblewoman was built near Khodja-Ahmad Mausoleum. These first mausoleums are decorated with carved enameled terracotta of turquoise green and dark blue colors. At the beginning of the 15th century, to the group was added a new mausoleum and mosque built on behalf of Tuman-aka, the youngest wife of Timur. 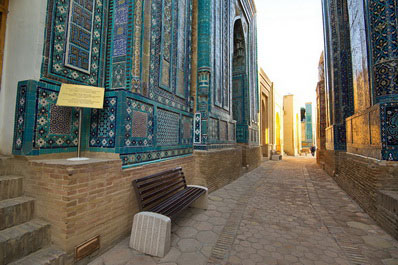 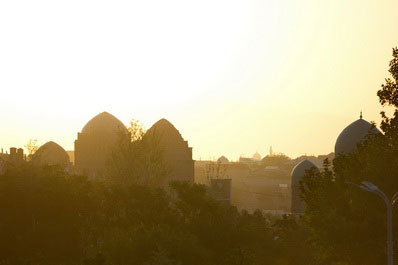 New mausoleums were constructed on the spot of pre-Mongolian structures in the 1380s-1390s. Two nameless mausoleums, the Amir Burunduk Mausoleum, a structure built by master Alim Nesefi and an Octahedral Mausoleum still survive. The Amir Burunduk Mausoleum has kept only its internal dome. Its cruciform crypt contains nine burials. Burunduk Mausoleum and one of the nameless mausoleums were built from brick and decorative elements from the Qarakhanid madrassah of the 11th century. The facade of the madrassah was used in the nameless mausoleum. The mausoleum by master Nesefi displays a decor of painted majolica, which displaced carved terracotta. Its semi-submerged crypt has a dome of "balkhi". Expressive eight-pointed stars form a characteristic feature of its portal. The middle star shows the names of twelve Shiite imams. The lower one contains the Koranic text of "Throne". The octahedral mausoleum was constructed in the 1430-40s. Today, it is represented by only a pavilion with side arches. The basement has a crypt with four female burials. A female necropolis was added to Shahi-Zinda by Amir Timur. In 1372, Uldjai Shadi-Mulk (a daughter of Timur's elder sister Kutlug-Turkan-aga) died. Her mausoleum was built beside the old wall. The mausoleum had a ribbed dome and portal with carved majolica. Kutlug-Turkan-aga died in 1383 and was buried in the same mausoleum. The younger sister of Timur, Shi-rin-bek-aga died in 1386. Her mausoleum became the most exquisite in Shahi-Zinda. Writings of Socrates on its portal represent a unique feature of the mausoleum. The decor was made in a new technology - composite mosaics of a sapphire-blue color. One of Timur's servitors, Amir Hussein, constructed a mausoleum for his mother, Tuglu-Tekin, beside the female Timurid necropolis. A conical dome crowns its square foundation. Carved enameled terracotta and painted majolica decorate the portal. The mausoleum of Amir-Zadeh is located beside it, at the edge of the ancient wall. It is a cubic building with a high portal and ribbed dome. Carved enameled terracotta is rare here; majolica prevails in its decor. Three lancet niches adorn the sides of the mausoleum. The octahedron underside of the dome has an additional arch system. Shahi-Zinda was developing downwards from the old wall at Ulugbeg. A two-dome mausoleum was built in that period. According to sources, it belonged to Uldja-Inaga, the nurse of Amir Timur. A legendary staircase runs beside. The number of its steps can be correctly counted only by an actual believer. In the 1430s, Ulugbeg built a front entrance with a dome chortak on behalf of his son, Abdal-Aziz. The mosque and auxiliary premises on the sides were built later. In the 19th century, Samarkand khakim Davlet Kushbeghi constructed a small madrassah by the entrance and a summer mosque opposite.