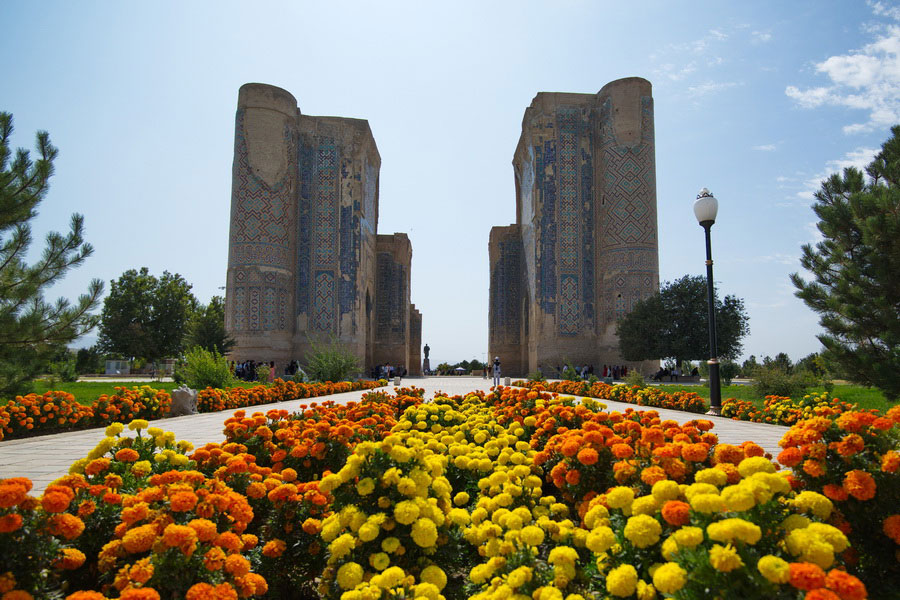 The most magnificent of monumental buildings were built in Shakhrisabz in the time of the Timurids is Ak-Saray Palace. Its fantastic ruins can be seen from afar and make a deep impression. Amir Timur meant to make Shakhrisabz the second capital of his empire, no less sumptuous than Shakhrisabz. The construction of the palace was started in 1380 and lasted more than 25 years. It is known that architects and handicraftsmen from Khorezm, shortly before subjugated by Timur, took part in the construction of the palace. Several legends are connected with the history of this grandiose structure. As one of them says, some gold sand was put into the clay intended for making the first bricks for the royal structure.

The construction works were carried out on a ‘kingly scale’ indeed. The great ruler begrudged no money. His buildings were supposed to be the biggest and the very best in the world. It was not without purpose that on the portal of his palace there was made an inscription that says: “Those who doubt my power and munificence should look at my buildings” On the basis of descriptions made by Timur’s contemporaries, as well as archeological research materials, the scientists managed to reconstruct the layout and artistic design of the palace. Though “Ak-Saray” means “White Palace” in Uzbek, in the context of a name for a palace the word ‘white’ can be interpreted as “ noble, regal”. What amazes a visitor first is the magnitude of the building. The inner courtyard alone was 250 metres in length and 125 metres in width. The height of the main portal crowned with arched battlement, was 70 metres – the size of a 20-storey building. Corner towers were no less than 80 metres high whereas the entrance arch span exceeded 22 metres. 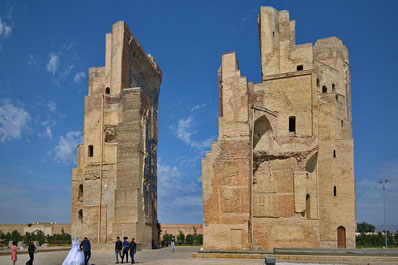 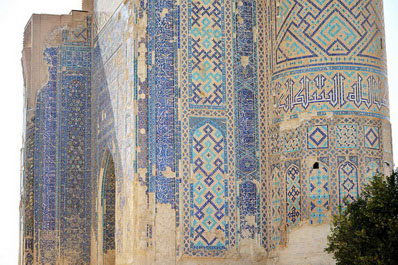 According to the records of Ruy Gonsalez de Clavijo, the envoy of the King of Castile to the court of Timur, they entered the palace “by a very broad and lofty door way, ornamented with gold and blue patterns on glazed tiles, richly and beautifully worked. On the top of this doorway there was the figure of a lion and a sun, which are the arms of the lord of Shakhrisabz…” The door led to grand reception hall. The luxury of decoration of the palace was supplemented with floors finely wrought in tiles, some of which was found during the excavation works.

The palace took on several functions: it was the place for recreation and entertainment of the royal family, as well as administration building for running state affairs. On the axis of the courtyard there were domed quarters for holding sessions of divan – council of state. The smaller halls on both sides were used for sessions of royal advisers – tavajibeks and divanbeks. The palace also accommodated richly decorated and sumptuously finished premises for harem. In front of the harem premises there was laid out a shady garden with pools faced with patterned tiles. One of the pools was intended for holy fish. The pools were fed by the water flowing in the lead conduit from the nearby mountains.

The resplendent exterior decoration covering the walls and domes of the Ak-Saray palace still arouses admiration. Large scale geometrical ornamental patterns on its facades are made of dark and light blue glazed bricks. Glittering against the polished brick background they impart a particular picturesqueness and grandeur to the building. The portal niche is decorated with elegant mosaics and carved majolica as well as quotations from Koran executed in sulus script. The walls of the palace, as well as the palace square, were decorated with tiled mosaics presenting combination of blue, green, yellow, and red colours. The colossal corner tower was girdled by a dictum made in Kufic script: “Sultan is the shadow of Allah”. Among the decorative tiles one can find the inscription with the name of the craftsman Makhmud Yusuf Tebrizi and the date the decorative works were completed – 798 (1395).

At the end of the 16th century Shakhrisabz rebelled against the rule of Sheibanid dynasty. After the siege of the disobedient city, Abdullakhan II ordered to destroy Ak-Saray as well as other Timurid’s constructions. In the 1760s the ruins of Amir Timur’s palace were within the residential quarters of Shakhrisabz bek. At that time Ak-Saray portal decorated the inner courtyard of the residence with its throne hall and treasury. The territory of former royal gardens and pools was build up with so called Tashkari – backyard with premises for bodyguards, servants and sentry. By the eastern entrance to Ak-Saray palace there was arranged Gun Yard – tupkhona. Only huge abutments of portal arch have survived, yet until now these remains of the former splendeur symbolize the might of Amir Timur’s state.