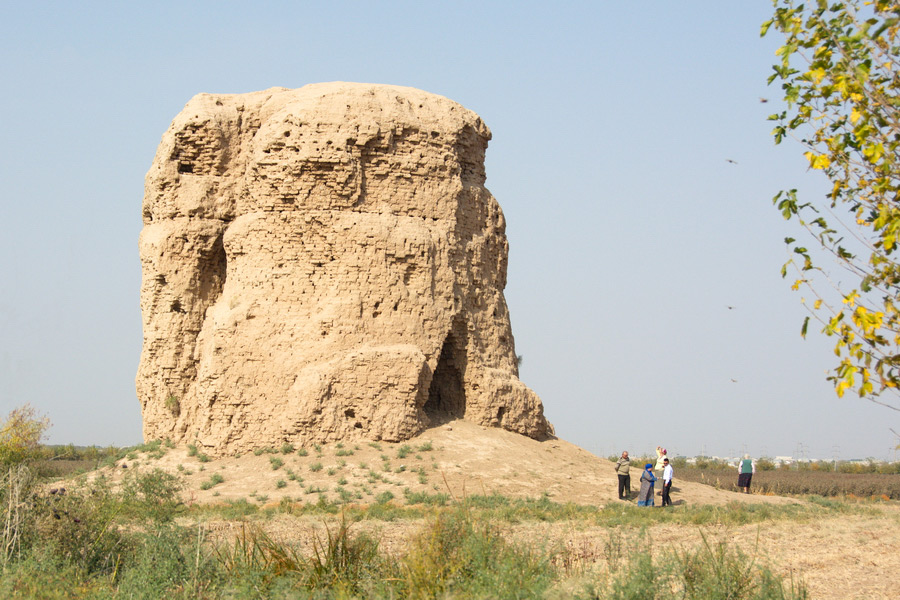 To the southeast of the ancient site of Old Termez, on the side of the road leading to the Surkhandarya Province central city, rise the remains of what is called Zurmala Tower. Archeologists took interest in the structure long ago. In as far back as 1926 they came out with the suggestion that it must have been a Buddhist stupa. A thorough exploration carried out 50 years later proved that it was a cult structure dating back to the golden age of the Kushan Kingdom.

Though in the course of time the tower underwent severe destruction it still makes a strong impression. It was built of adobe square bricks 33x33 centimetres. Each of the bricks has a distinctive stamp in the form of a line and two small pits. According to archeologists such bricks were used in Bactria only in Kushan times, that is early 3rd century CE. In the later period there were used bricks of rectangular shape. The scientists estimated that almost 1200000 bricks were needed for construction of the stupa. In the upper part of the windowless monolith adobe brick structure there is a small chamber for relics.

The tower stood on a base of 22x11 meters in area. Its sides were perfectly aligned with the four cardinal points of the compass. The cylindrical body of the stupa is 14.5 meters in diameter and 13 meters in height from the base. The transition from the brickwork to the spherical top is clearly noticeable. It was proved archeologically that the platform of the stupa was covered with marl limestone. At the foot of the structure archeologists discovered a few stone blocks and profiled buttresses. The stupa had been also faced with kilned bricks; their fragments can still be found around the stupa. It is not known yet whether the stupa was a part of a temple complex or just a lonely structure.

The stupa is one of the main and oldest Buddhist symbols. The oldest stupas, with Zurmala Tower among them, were hemispherical structures built of bricks and stones. Their shape derived from ancient burial mounds – tumuli, and symbolized the death of Buddha and his burial – parinirvana (final transcendence). Actually, the word stupa in Sanskrit literally means "a pile-up of clay or stones". Stupas were built on high bases with a circumambulatory. Another general purpose of a stupa is to be the place where Buddhist relics were enshrined. 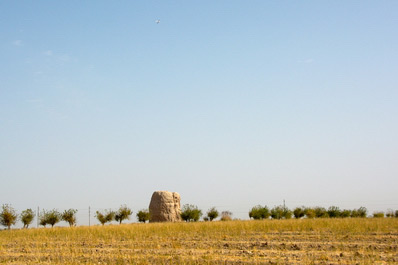 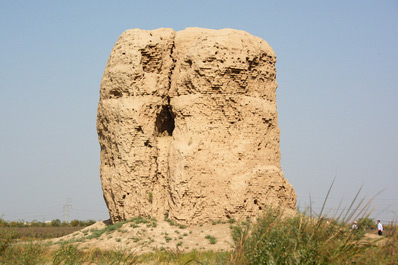 In the first 100 years after Buddha’s death his relics – a lock of his hair, a shred of his clothes and a bit of his physical remains – were enshrined in a cubic box, which served as a reliquary called "God’s abode". Later precious stones and metals, as well as grains as symbols of God and God’s power, were kept as relics. The reliquary was placed on top of the stupa; above there was a conical spire surmounted by a three part umbrella. Everyone in India knows that an umbrella is a symbol of royal background. Siddhartha Gautama, generally recognized by the Buddhists as the Supreme Buddha and "Enlightened One", was a northeast Indian king’s son. He was considered not only a great spiritual teacher. His followers believed he was the king of gods and the universe. That was why they placed "umbrellas" atop stupas. Curiously enough, a few centuries later this ancient hemispherical mound evolved in Southeast Asia into an architectural form called pagoda.

The spire with "umbrellas" on Zurmala Stupa has not survived. But the wall paintings in the Buddhist cave temple Karatepa located nearby on the ancient site of Old Termez show how Bactrian stupas looked like. They were mostly step-shaped three-layer structures with a dome on top; each of the domes had a spire with "umbrellas of honor". On the basis of the tower proportions analysis, the archeologists came to the conclusion that original appearance of Zurmala Tower had been similar to these pictures.

The stupa near Old Termez was the first Buddhist structure found on the territory of Central Asia. Today there are about forty Buddhist monuments in this region with twenty of them being located in Uzbekistan.