One of Uzbekistan’s most unique attractions is Solar Furnace in Parkent, a scientific marvel with only one other equivalent in the world (located in France). Also called the Sun Institute of Uzbekistan, this bizarrely shaped structure is visible from a distance and even more fascinating up close. For many years it was a classified military object where tests were carried out on various spacecraft and military equipment, yet today this once off-limits site is open to the public and used solely for scientific purposes.

Located in the Changikhisarak village  in Parkent District near Tashkent, Solar Furance makes a great day trip from the capital city.

The unique Solar Furnace design is the brainchild of academician Sadik Azimov, whose enthusiasm laid the foundation for solar science in Uzbekistan. Construction began in 1981 and lasted until 1987. The complex was built on an open hill in an ecologically clean area which sees approximately 280 sunny days per year. At the heart of the hill is a solid natural plate which helps to ensure maximal accuracy at the complex even in adverse seismological conditions.

Solar Furnace operates under the Institute of Materials Science (Physics-Sun Academy of Sciences) which now employs over 160 individuals including academicians, Ph.D candidates and doctors of science. 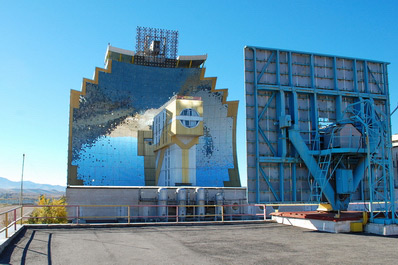 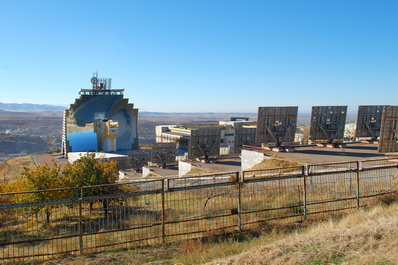 Fun Fact: Institute of Materials Science has created a line of ceramic products which are made using materials developed and synthesized at Parkent’s Solar Furnace. The products are valued for their unique characteristics, including low thermal expansion, high strength and heat resistance.

How Does the Solar Furnace Work?

Sun Furnace of Uzbekistan is an optical-mechanical complex with an automated control system. It consists of 3 major components: a heliostatic field, a solar energy concentrator and a technological tower. The concentrator is of particular note: it has no less than 10,700 mirrors and hub dimensions of 54x47 meters, making it one of the largest in the world.

Together the three parts form a stationary, high-density flow in the 1-meter concentrator, after which a compact flow of solar energy with a capacity of one megawatt is directed through a round window to a focal zone in the technological tower, creating a high-energy area. The technological tower has granules of refractory metals compressed into briquettes, which are melted at a temperature of 3000 degrees Celsius, and special devices installed inside the tower allow scientists to study the physical and chemical processes that occur on substances under high-temperature effects. 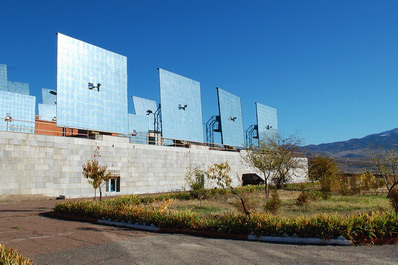 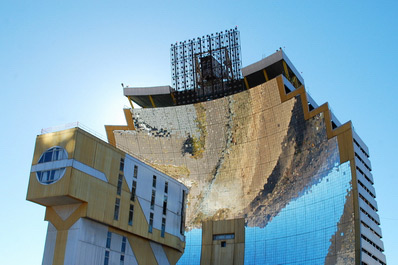 The unique features of Solar Furnace in Parkent allow for multi-purpose observations of the Sun and for theoretical and experimental research which contribute to our understanding of the Sun, the solar system and the effect of solar radiation on the Earth's climate. Many of the resulting discoveries are now used around the world in various fields and industries: