...The City perished time and again on fire, but life again and again revived on this earth. Once, after the next attack of invaders, people left from the ashes and have never come back. New settlements have risen on coast of Bozsu canal, and ruins of the ancient city eventually turned into flat hills covered by ground and natural growth...

Ancient settlement of Ming Urik is ruins of an ancient city which is often mentioned in historical documents as Chach. According to archaeological artefacts the city existed from 1st century AD. to Arabic invasion into Central Asia in 8th century. According to historians, the city was included into the union of several cities - the states under the general name of Chach.

Members of the Turkestani circle of archeology lovers which was open in Tashkent in 1895 were the first to become interested in the hills of Ming Urik. During that period of time the description of this ancient settlement has been made and the first finds appeared.

Scientists assume that the site was residence of Turkic governors. The kernel was a construction from adobe brick and pahsa (mixture of clay and straw) in the form of a square with the semicircular towers attached from each side. The lay-out in the square and the scheme of construction develops a principle used in construction of a known city of Shashtepa. Huge piles of pure ashes from west side of the building and stocks of wood fuel in one of internal premises specify its function of a temple, with the open altar of fire situated above the construction. 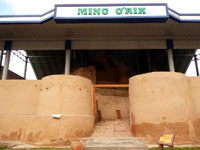 The complex has been erected at Ming Urik by people which spiritual culture was defined by fire and sun worship. Probably, it existed till 4th century AD and specifies that in the ancient time the territory of modern Tashkent was included into the area of the largest cultic centre of Kangju. The urbanization beginning in Tashkent can be tracked on written Chinese sources from the end of 2nd century BC. The Chronicle of the senior house of Han "Shitszi" informs on area and the city of Juni as a part of Kangju Kingdom which kernel is scientifically proved to be placed in the Tashkent oasis.

Later Chinese sources name area and the city of Shi which is inherited by Juni. As appears from sources, after Kangju Kingdom dissolution into small domains in the 3rd-beginning of 4th century AD Shi has turned into the small independent state. According to archeology database, the most ancient capital of this domain settled down on an enormous site of ancient settlement of Kanka, 70 km to the south from Tashkent. In the future Tashkent during the same time there was a number of urbanized settlements, as it was mentioned above.

It is possible to consider the ancient settlement of Ming-Urik located in the north on coast of Salar canal as the most ancient kernel of Tashkent city, appeared as a result of intensive development of water system Salar-Djun and urbanization development.

Now the monument of Ming-Urik is under protection of the state and is interesting place to visit.