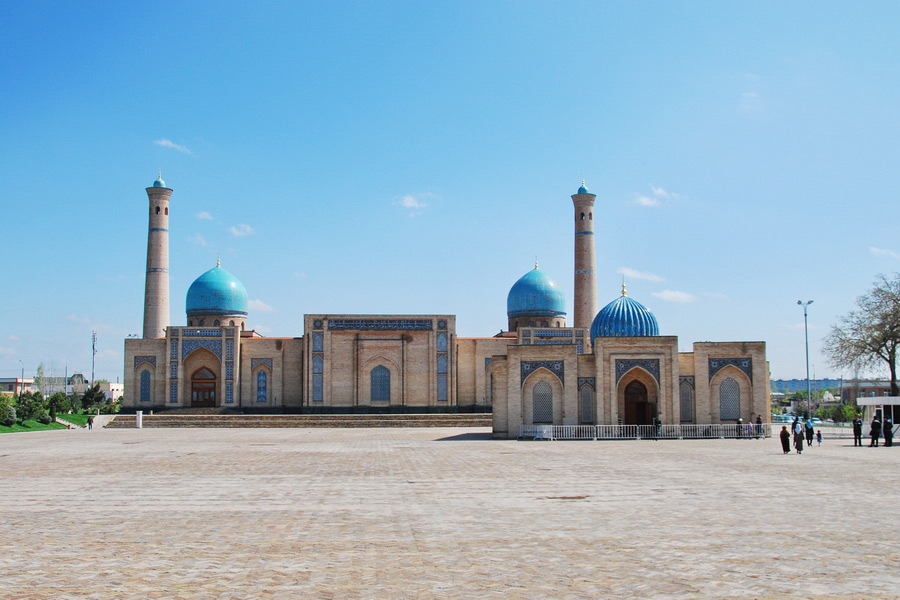 The ensemble was built on the tomb of one of the first Imams of Tashkent, a famous scientist and expert on the Koran and the khadises of khazreti Imam (his full name is Abubekr Mukhamad Kaffal Shashi). According to historical data, he was buried in the territory of Sebzar - one of the four city areas of Tashkent which were later developed. The tomb was popular and is highly honoured. All districts in the Sebzar part of the old city received the name of Khazreti Imam - named after the Sheikh.

In the 16th century, Barak-Khan medreseh formed the base of this ensemble and united two more mausoleums of the 15-16th centuries: "Nameless" and "Suyunidj-Khana" in one complex. On the opposite side of the Barak -Khan Medreseh, the Tashkent mosque of Tillya-sheikh is located and currently operating. It was built in 1856-57 by the Khan of Kokand, Mirza Ahmed Kushbegi. The shape of the building is rectangular, a longitudinal - axial construction of the 16th century topped by 12 domes (three in each of 4 rows). The entrance compartment is separated by later added partitions which form a square hall for prayer. A further two rooms for prayer, winter and summer halls called ayvan; a short minaret; warehouse rooms and a library are also located here. The mosque is decorated with carved window apertures with minarets on each side. Later, an extension, with an ayvan, mikhrab niche, and minbar (a throne where prayers are read during Namaz) appeared. 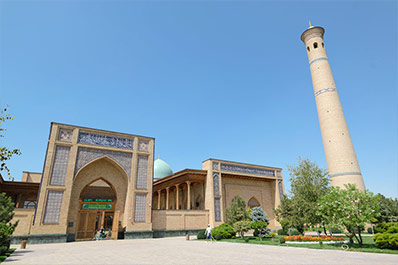 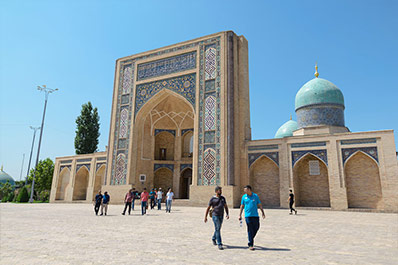 An architectural monument of the16th century, the mausoleum erected above the tomb of the esteemed ecclesiastic, Mohammed Abu-Bekr Kaffal-Shashi (died 10th c.), is also included in the ensemble Khazret Imam. The mausoleum has a rectangular form, and is topped with a dome on a cylindrical, slightly narrowed drum. The gravestone of the sheikh is located in the niche of the mausoleum. In spite of the fact that this building was rebuilt several times, for the walls of the ancient part of the mausoleum baked tiled bricks and belts of majolica inscriptions were used for the decoration of the mausoleum. The portal still has facing from glazed bricks and majolica. Gunch pandjars are inserted into the windows. Gunch girikhi on soffets of niches have been preserved (from previous decorations), the bases of flat stalactites covering an ancient dome (6 lines) are visible; and the tomb of the sheikh is separated by a type-set wooden pandjara of two different constructions. 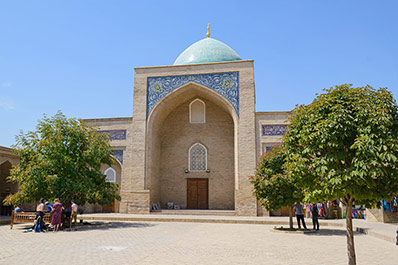 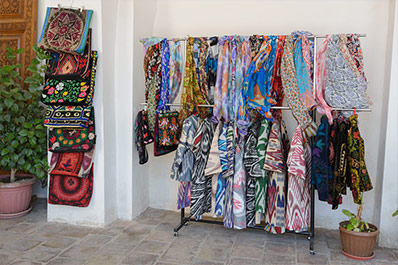 The Mausoleum of Kaffal-Shashi represents a rare version of a multichamber mausoleum - a khanaka of the mid-16th century with an assymmetric layout; it has preserved a unique decor for Tashkent, with its majolica from the 16th century and with historical inscription containing the names of master architects and dates of construction. This monument is of high historical and artistic value. And 40 meters from the mausoleum of Kaffal-Shashi is an earlier mosque, Namazgokh (mid-19th c.), which is also included in the ensemble of Khazreti Imam.

Its main facade enters into an internal one, now a small courtyard. There is no exact historical data on the date of the construction of this mosque. It is only known that it was erected in the era of the Kokand khanate (First half of the 19th c.). In the building of the Tashkent mosque Namazgokh is a dominant theme - the central space of the winter hall of the mosque, from which the lowered parts of the dome galleries depart: four passes in two rows of dome compartments in each section. They are shaded by wooden ayvan with columns placed in harmony with the gallery pylons. The galleries themselves are blocked by unary spherical domes on sails in the form of a shield. The layout of the mosque represents an extended rectangle. 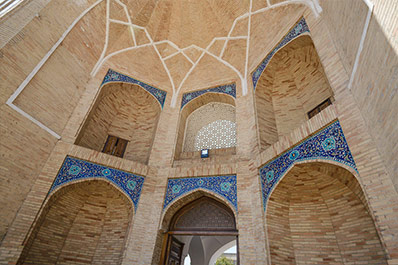 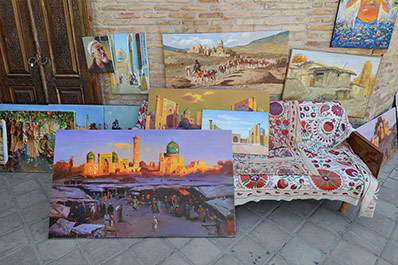 The interior of the main space represents a wide, spacious hall, expanded by four niches, topped by a dome on four crossed arches. The walls of the mosque are made up of baked tile bricks. The facades are in black brick. The interiors of the mosque are not decorated. Their unique detail is mikhrab niche in the main hall, with small, flat, mukannas in the arch. At the top, there is a carved pandjara. Currently, the monument is under reconstruction, and certainly some of its interiors have been changed. These days the Islamic Institute named after Imam Al Bukhari is located in this building.