In 1964, the Memorial Museum of Mirzo Ulugbek in Samarkand was opened near the Ulugbek Observatory. The museum contains excerpts from famous astrophysical tables calculated by Ulugbek and his associates, plus excavation photographs, a collection of ancient astronomical instruments and murals depicting episodes from the astronomer’s life.

The current building housing the Ulugbek Museum was built in 2010 on the initiative of the first president of Uzbekistan, Islam Karimov. The entrance is reflective of the entrance portals of Samarkand’s 14th-15th century madrasahs, while the building’s shape resembles the dial of a unique medieval watch. Each part of this watch “tells” about Amir Timur and his grandson Mirzo Ulugbek, leaving visitors immersed in the recreated atmosphere of a 15th century observatory. 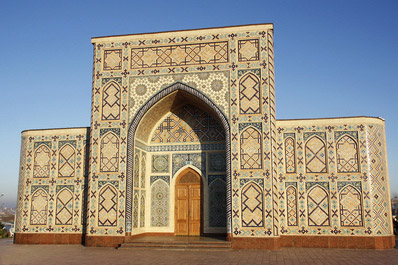 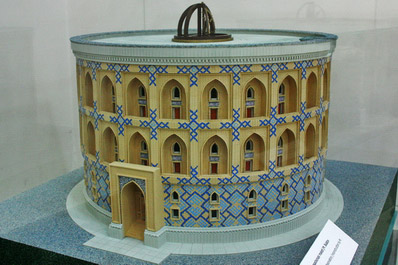 Model of the Ulugbek Observatory

The exhibition begins with a portrait of Mirzo Ulugbek at the entrance of the museum and continues to a map of the Timurid Empire, a copy of a letter written by Amir Timur and a colorful miniature painting depicting the birth of Mirzo Ulugbek. There are also depictions of famous scientists of that time, including Jaloliddin Rumi and Ali Qushji, coins from the time of Mirzo Ulugbek, waqf (religious charitable donations), documents pertaining to the observatory’s history and models of the original observatory. The expositions conclude with a linocut depicting Ulugbek among the famous astronomers of the world and a display of Ulugbek’s book “Zij”, otherwise known as the “Astronomical Tables of Ulugbek”.

The Memorial Museum of Mirzo Ulugbek in Samarkand, together with the remains of the observatory and a unique quadrant instrument, comprises a single ensemble. In 2010, a gigantic monument to Ulugbek was unveiled near the museum against a background of a panel depicting a starry sky. 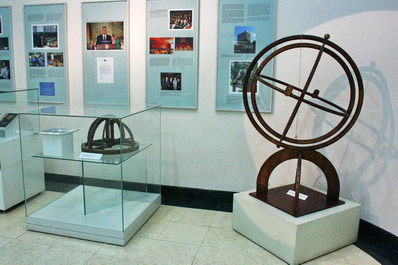 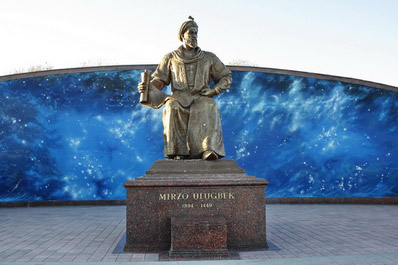