Kalyan Minaret (Great Minaret) is the main symboi of sacred Bukhara. The minaret was used not only to call Muslims to prayer, but symbolized the authority and power of its spiritual leaders. The central ensemble of Bukhara-Poi-Kalyan - literally "Beneath the Great" grew up around the minaret.

It is a classic sample of Central Asian mosque: the winter building of 1712, summer aivan of the early 20th century with ornamented ceiling and wooden columns, small minaret constructed in 1917 by usto Shirin and small basin.

Kalyan Minaret has a Twin: in the middle of the 12th century, a talented pupil of Bako constructed a similar minaret in Vabkent, located not far from Bukhara. 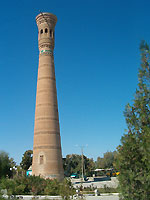 It is a well-balanced brick tower, 39 meters in height. Vabkent Minaret is also crowned with a fine arch, named "light" analogous to a lighthouse ("minaret" comes from the Arabian "manara" — a place of fire, lighthouse). The scale and harmony of the two Bukhara minarets determined the value and status of the minaret in Central Asian architecture, as a symbol of its Islamic culture. Dzharkurgan minaret. The current height of the Minaret is 21.6 meters, with a diameter at its peak of 4.1m and at its base about 5.4m. At the time of construction, its height was significantly higher and had a second section, which was clearly once crowned by a lighthouse. An inscription on one of the ribs of the stem announces the name of the builder - "Ali, son of Muhammad, from Sarakhs. The date of completion is believed to be the year 502 on the Islamic calendar (1108/09 A.D.). 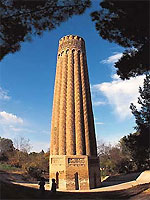 Dzharkurgan minaret takes the form of a corrugated cylinder: 16 nearly separate "ridges", upholding a high octagonal cap and connected at the top by a horizontal band. A niche in the southwestern entrance provides access to the minaret's staircase. The richly detailed figurative brickwork of the decorated structures, while creating a feeling of softness and grace, reaches the highest level of Central Asian craftsmanship.

Djuma-Mosque Minaret. One curious fact stands out particularly, five of Khiva's minarets are located on the same line at a distance of about 200m. The minaret of Djuma-Mosque occupies the central point. Kalta-Minor stands to the west of it, and farther, the minaret of Biki-Djan-bika. The minarets of Seyid-biy Mosque and Palvan-kari Minaret are located to the east. The diameter of Djuma-Mosque's Minaret is 6.2m at its base; its height is 3.2m. An eight-arch lantern with a hanging cornice and dome crowns the minaret.

Kalta-Minor. A short, yet enormous, minaret stands before the facade of the Muhammad Amin-khan Madrassah. This is Kalta-Minor - the "Short minaret". The minaret and Muhammad Amin-khan Madrassah were intended to finish the plan of the big square near the western gates of Ichan Kala. Kalta-Minor should have become the biggest and highest minaret in Central Asia. Its massive base is 14.2m in diameter. However, construction was interrupted upon the death of Muhammad-Amin-khan in 1855 after a battle with the Turkmen, as reported by historian Munis.

Minaret of Islam-Khodja. In 1908-1910 Islam-Khodja built this ensemble in the southeastern corner of Ichan Kala. It consisted of the smallest madrassah in Khiva and the highest minaret, imitating the ancient minarets of the 11th and 12th centuries. The top platform, at a height of 45m, is the highest observation point in Khiva. Horizontal belts of dark blue, white, blue and green glazed mosaic decorate the minaret. Its skylight has a stalactite cornice and ceramic lattices - pandjara.

Minaret of Seyid Sheliker-biy. At the time of Allakuli-Khan, the rich merchant Seyid Sheliker-biy built a complex of religious structures outside Ichan Kala, beside the gates of Palvan-darvaza. This consists of a nine-dome mosque, two-storied madrassah and a minaret. An open aivan with three carved wooden columns was built from the end of the 18th - beginning of the 19th centuries. It adjoins the main building of the mosque on the northern side. The height of its minaret is more than 30 meters. Hanging eaves and arched lanterns crown the minaret, located in the eastern part of the mosque's courtyard.

Minaret of Tura-Murad (1888) - This miniature minaret now stands alone among residential houses, opposite the Kunya-Ark; it was built along with a mosque of the same name, which has not survived.

Minaret Abdal-Bobo is a small (height - 10m, base diameter - 3.2m) but expressive tower, in the shape of a fat, sharply tapering barrel, crowned by an elegant cornice, or "Sharaf". On the way to Koy-Darvaza sits the architectural complex of Abdal-Bobo, developed around a small cemetery. Here in the House Bank, the largest quarter mosque, slaves were traded.

Minaret Bika-Jan-Bika (1894). It is located outside the gates of Ata-Darvaza and is a virtual twin of the Abdal-Bobo minaret. For the memory of future inhabitants, the name of the master who built the minaret was inscribed into the stone - Avula.

Across the border from Nukus in Uzbekistan stands the towering Minaret of Kutlug-Timur, a structure whose original age and name are the subject of scientific controversy. It has been supposed that its construction began in the 11th century, during the rule of Khoresm Shah Аbu-Abbas Mamun. For unknown reasons, construction was interrupted for a very long time, and was completed only in 1321-1336, in the time of Kutlug-Timur (the vice-regent of the Golden Horde). This 62m tower was named after him; and is the tallest minaret in Central Asia. It is well-proportioned and tapers upwards along toward the peak (diameter at base is 12 meters; at the top - 2m). The "trunk" is divided by narrow belts of vertically stacked bricks, which create specific architectural rhythms and are inlaid with wide bands of Arabic inscriptions.

In the past, the Minaret was crowned by a wooden lantern, from which the brickwork supports remain. A spiral staircase of 145 steps leads to the lantern, though access to the stairs was only possible from the roof of the neighboring mosque, which unfortunately no longer exists. Several years ago the plinth of the Minaret and its surroundings were entirely restored. The UNDP Project has assumed the preservation, i.e. reconstruction work of its dangerous top, which represents a very complicated engineering task, owing to the fact that personnel must work at the very summit, without scaffolding!