Navruz - A Celebration of Life 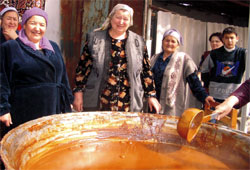 Navruz (also called Noruz, Nowruz, Nowrooz, and Nawruz), the spring "New Year" holiday, has been celebrated for at least 2,500 years, and perhaps for as long as 5,000 years. Originating in Persia and long associated with the ancient Zoroastrian religion, its name means "new day" in Farsi because for ancient Persians it marked the first day of the New Year. On this day, Persian kings would have worn a crown with images of the annual solar cycle on their heads, participated in the divine mass in the Temple of Fire, and distributed generous gifts to citizens.

Today, Navruz is celebrated each year on March 21, when the sun enters the sign of Aries on the astrological calendar. In the northern hemisphere, this date frequently coincides with the spring equinox, the day on which the number of daylight hours equals the number of nighttime hours. On our modern Gregorian calendar, the spring equinox varies from March 19 to March 21. Although their calendars were different, ancient peoples followed the course of the sun and moon closely, and knew that the seasons began to change on this date. For them, it was as if the powers of light had overcome the powers of darkness, allowing the earth to awaken and life to be rekindled. Many of us have similar feelings today, even though we understand the more scientific explanation: that the northern hemisphere begins to tilt toward the sun at this date, which results in longer and warmer days.

As Turks and other nomadic peoples moved into Central Asia and areas around Persia, they adopted the celebration of Navruz. Just as the Saxon holiday of Ostara was embraced by Christianity and become Easter in the West, Navruz traditions, which had grown strong roots in the life of Eurasian farmers and townspeople, survived the coming of Islam to the area 1.400 years ago. Today, Navrus is celebrated widely and colorfully in Iran, Azerbaijan, Afghanistan, Uzbekistan, Tajikistan, Kyrgyzstan, Kazakhstan, Turkmenistan and the western provinces of China, as well as the Kurds in Turkey, Syria and Iraq and the Tatars and Bashkirs in southern Russia. In the last ten years, the Central Asian republics have recognized Navruz as an official holiday. Its celebration is marked by concerts in parks and squares, trade fairs and national horseracing competitions.

Celebrations of spring are a natural outgrowth of the Earth's rhythms. In most of the Silk Road countries, Navruz announces the joyful awakening of nature after winter and the beginning of the agricultural cycle of cultivating, planting, and harvesting.

Navruz traditions are similar throughout the region, and have varied little over the centuries, except to embrace Islam. Unlike the western New Year traditions, Navruz is celebrated during daytime hours within the family circle. March 21 is the main celebration, but for the next 13 days it is common practice to visit friends and relatives, buy and plant seedlings of fruit trees and have cheerful gatherings in the fresh spring air. Traditionally, it is also a time to "clean up" one's life.

People tidy up their homes, wash rugs and draperies, decorate with flowers, and buy new clothes that they will use for visiting. On the day of Navruz, all housekeeping - including the preparation of the meal, careful cleaning of the home and the arrangement of blossoming branches from apricot, peach, almond or pomegranate trees - must be completed before the rising of the morning star. Children enjoy the holiday because they often get presents of money, as well as blessings, from their elders.

The activities of the first 13 days of the New Year are considered harbingers of the year to come. For this reason, it is traditional to end quarrels, forgive debts and overlook enmity and insults. It is a time for reconciliation, when forgiveness and cheerfulness are the dominant sentiments. As with the celebration of the Chinese New Year, there are traditions associated with the first visitor to the house during Navruz. To ensure good luck for the coming year, this person should have a "happy foot"; he or she should be kind, gentle, witty, and pious and have a good reputation.

In Iran and the small communities of Kurdistan, Iran and Northern India, where Zoroastrism has retained a strong influence amongst the populace, traditions require that the Navruz celebratory table contain specific elements. First, there must be a mirror, which reflects the past and shows the future so that people can make reasonable plans. Next, there must be candles. The flames hark back to the sacred nature of fire in the Zoroastrian religion, and personify the light and energy of a righteous life. The table must also contain an incense-burner for aromas and a water-filled vessel in which a live fish is placed to symbolize a happy life full of activity and movement. Most tables also include coins, fruit and a copy of a sacred book, such as the Koran. Various types of food and plants must be on the table, including seven dishes that begin with the Farsi letter "S" and seven dishes that begin with the letter "sh." These include vinegar, sumac berries, garlic, sprouted wheat, apples, berries of sea-buckthorn and fresh herbs as well as wine, sugar, syrup, honey, sweets, milk and rice.

In the western provinces of China, both Turkish and Chinese people celebrate the holiday of Navruz by wearing bright cheerful clothes and going to the temple with flowers and a small clay figure of a buffalo. A large bamboo buffalo is constructed near the temple and covered with paper painted in red, black, white, green and yellow, which symbolize the five elements of the universe (fire, water, metal, wood and earth). Near the temple people break clay figures down and burn the bamboo buffalo.

Central Asia has its own Navruz traditions. From ancient times, the holiday was celebrated in agricultural oases with festivals, bazaars, horseracing, and dog and cock fights. Today, Uzbeks still serve a traditional meal of "sumalyak", which tastes like molasses-flavored cream of wheat and is made from flour and sprouted wheat grains. Sumalyak is cooked slowly on a wood fire, sometimes with the addition of spices. Sprouted grain is a symbol of life, heat, abundance and health.

On March 21, Kazakh and Kyrgyz households fumigate their homes with smoke from the burning of archa twigs (a coniferous tree of Central Asian that grows mainly in mountainous areas). This smoke is said to make malicious spirits flee. The main holiday dishes for Turkic Central Asians are pilaf (plov), shurpa, boiled mutton and kok-samsa pies filled with spring greens and the young sprouts of steppe grasses. According to tradition, people try to make the celebratory table (dastarkhan) as rich as possible with various dishes and sweets. Everyone at the table should be full and happy to ensure that the coming year will be safe and the crop will be plentiful. The holiday is accompanied by the competitions of national singers and storytellers, competitions of horsemen and fights between strong men.

Tadjiks, whose ethnic roots are more Persian than Turkic, have slightly different traditions. In a Tadjik household, the owner of a house or his elder sons must prepare fried shish kebab and a sweet pilaf made of rice and other cereals. These dishes symbolize the wish for the coming year to be as "sweet" and happy.

Some mountain settlements have a special custom. Before the holiday, young men will try to secretly clear out the cattle shed of a prosperous man with a marriageable daughter. If they succeed, the owner must treat them generously; however, if they fail, they must treat the owner. In Afghanistan, Navruz is called "Ruz-e-Dekhkan", the Day of the Peasant, or "Ruz-e-Nekholshoni" the Day of Planting Trees. Before going to their fields, farmers arrange parades with songs and dancing, and traditional instruments. The horns and necks of oxen that will be used for the first plowing of spring fields are sometimes rubbed with aromatic oil.

In southern Russia, the Bashkirs probably adopted the celebration of Navruz from Persian tribes that once lived in the Ural Valley. The weather in these territories is not yet spring like in late March, so the holiday is somewhat different than in other regions. First, young men in a community collect products for the making of a common meal and embroidered "prizes" for the winners of running, dancing and singing competitions that will be held. On the day of Navruz, ceremonies are performed to cajole the natural forces and spirits of ancestors into assuring a successful new year. In addition to the common meal, each family cooks a celebratory dish from buckwheat groats and sweets.

Throughout the world, many other cultures have long celebrated the coming of the spring equinox. In Egypt, both Moslems and Christians celebrate the coming of spring on the Monday after Coptic Easter. This holiday, called Sham el Nessim, is thought to have its roots in ancient Egypt, when it was celebrated at the spring equinox just like Navruz. Ancient Slavs, the Japanese and many Native American tribes also have historical holidays that were tied to the spring solstice. The longevity of Navruz and other spring celebrations indicates the significance we still attach to the beginning of a new agricultural year and the triumph of life and warmth over the long cold winter. So, wherever you are next March 21, celebrate life! 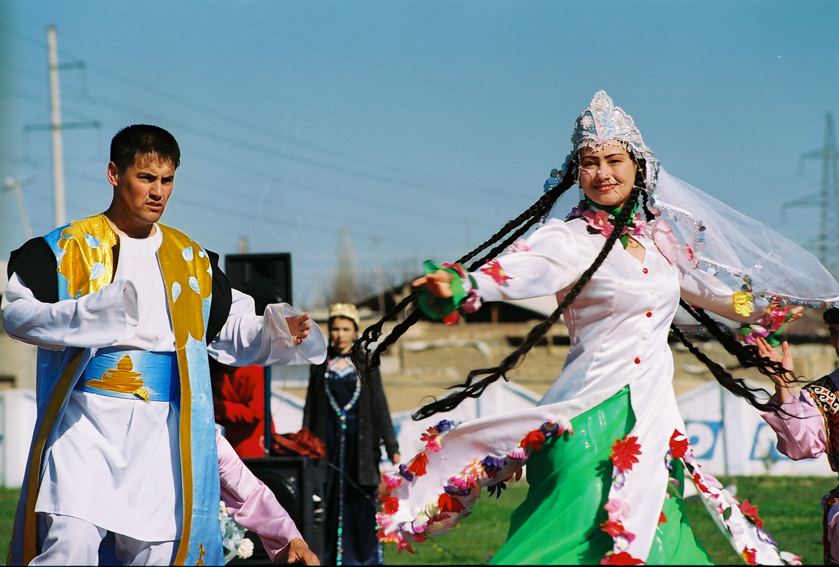 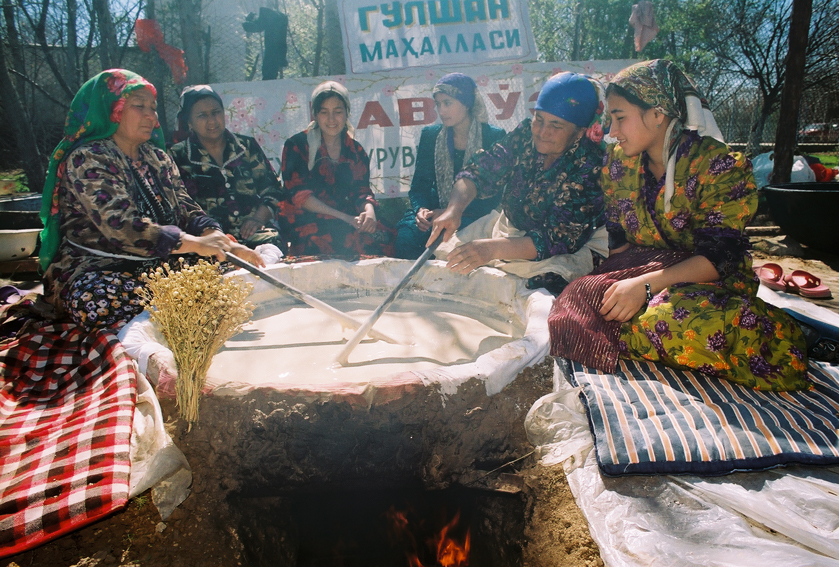 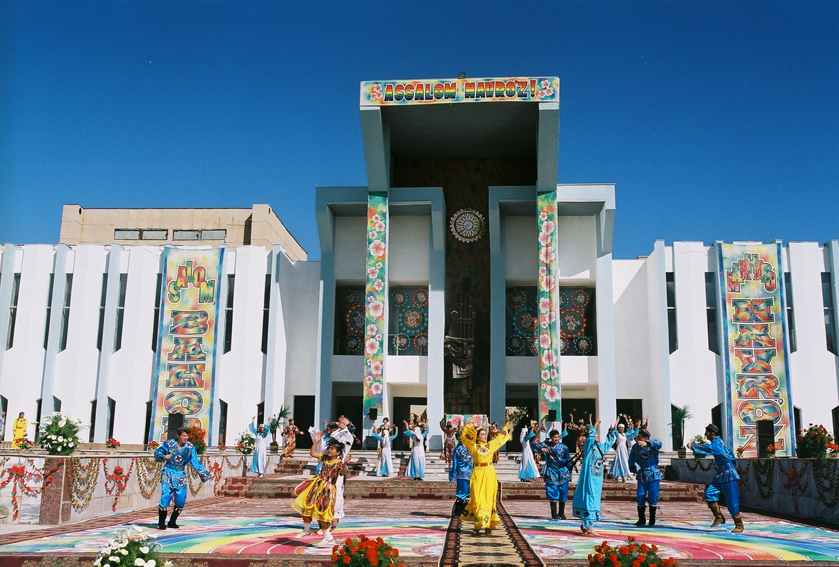