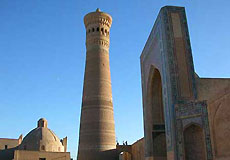 Kalyan Minaret (Great Minaret) is the main symbol of sacred Bukhara. The minaret was used not only to call Muslims to prayer, but symbolized the authority and power of its spiritual leaders. The central ensemble of Bukhara - Poi-Kalyan - literally "Beneath the Great" grew up around the minaret. 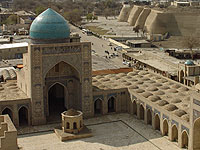 Today's Kalyan Mosque was built at the beginning of the 16th century, at the first Shaybanids. Since that time, except for Soviet time, it has operated as cathedral mosque of Bukhara.

The mosque replaced the old Qarakhanid cathedral mosque of the 12th century, which was built simultaneously with Kalyan Minaret. This Shay-banid mosque is comparable witn Temuricl cathedral mosques in Samarkand and Herat. It is behind Bibi-Khanym Mosque in Samarkand in number of structures, but, its area of 130 x 80 m surpasses the last one.

Kalyan Mosque is traditionally rectangular in layout and has four aivans. Aivan at the entrance has external portal fronting the Poi-Kalyan Square and internal portal overlooking the courtyard. Arched galleries with 288 domes go on perimeter of the court yard. They are based on 208 columns. The octahedral stand used as lectern is located on the central axis beside the internal portal. Mosaics and glazed bricks make colored decoration of facades. 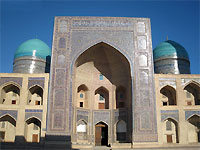 Active Miri-Arab Madrassah is located opposite to Kaiyan Mosque. This is one of the most esteemed spiritual Islamic universities on the post-Soviet territory. It was constructed at the Shaybanids in the 16th century in account of trophies the nephew of Shaybani-khan, Ubaidallah-khan (died in 1539) took. Khan gave them to his teacher and head of Bukhara Muslims Miri-Arab ("Prince of Arabs"). The last came from Yemen and was a pupil of Khodja Akhrar. Madrassah has traditional layout-two floors of hudjras surround four-aivan courtyard.

Classrooms occupy three corners of the building. The fourth belongs to necropolis of Ubaidallah-khan and Miri-Arab. The khan's tomb with wooden gravestone in the Yemen style is located at the foot of Sheikh Miri-Arab's tomb. The portal in the middle of the facade has semi-octahedral arch. Mosque and gurkhana with domes on high cylindrical drums are behind two-storied loggias of the facade. The external decor is formed by carved mosaics of vegetative ornaments and Sulth scripts.