Customs and traditions of the Kazakh people

Ancient Kazakh traditions, developed over millennia, are a foundational part of Kazakh society. Their nomadic way of life significantly influenced the formation of their national customs and beliefs, and although the Kazakhs have long since built cities and transitioned to sedentary life, they continue to hold their traditions in high regard. While some Kazakh traditions have survived to the present day, albeit in modified form, others are only recollected as memories from the distant past. 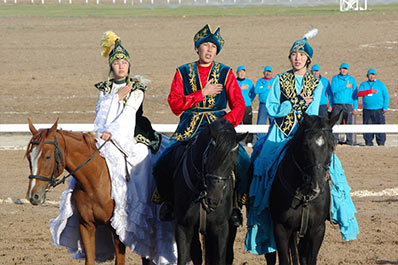 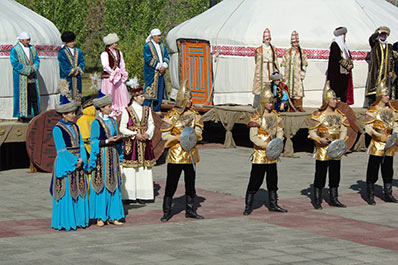 Without exaggeration, the wedding can be called one of the most important events in the life of a Kazakh. Parents would begin to prepare for it long before their children came of age, looking for a worthy family for their child in neighboring villages. The wedding ceremony was accompanied by many traditions, which took place over several days.

The most important of all Kazakh wedding traditions that remains to this day is the ban on the marriage of relatives up to the seventh generation (adat). Other traditions have become outdated in the 21st century.

A Kazakh wedding was celebrated in several stages: matchmaking, meeting of the in-laws, acquaintance of the bride and groom, a lively feast in the bride's home, seeing off the bride and the official marriage ceremony, to name a few.

As in all Central Asian countries, Kazakhstan culture has a well-developed tradition of hospitality. Welcoming guests into your home was taken so seriously that a person could be reprimanded or even fined for failing to comply with the recognized customs of hospitality. Embedded within the Kazakhstan lifestyle was the expectation that hosts were to receive even uninvited guests with great honor.

Per tradition, the guest was seated at a place of honor in the middle of the yurt and was treated to Kazakh traditional food and kumis (mare’s milk) and presented with special gifts.

According to a Kazakh proverb, “A house full of children is a place of happiness. A house without children is a graveyard.” The birth of a child is the greatest source of joy for many Kazakhs, and birth practices in Kazakhstan reflect this happiness.
Understandably, there are many Kazakh childbirth traditions that continue even to this day. Since these rituals are believed to protect the child from evil and ensure a long, prosperous life, they are carried out with great reverence.

Complex traditions surrounding Kazakhstan gift giving and superstitions continue to be observed today, playing a powerful role in people's lives. Some of the most fascinating and widely observed Kazakhstan beliefs include:
Tayyim – In Kazakhstan culture, whistling in the house could scare away luck and money from the home. You should not walk in front of an elder so as to block his path. A knife or salt should never be handed to a loved one, but placed on the table for them to pick up separately. These superstitious prohibitions, and many more, are collectively called tayyim.