Natural Oasis of Kazakhstan. Borovoe Kazakhstan When the God created the world, - as legend has it, - one people was bestowed with great forests, green fields and wide rivers and another people got beautiful mountains and blue lakes. But the Kazakh people were given only steppe. It hurt the Kazakhs' feelings and they began to ask the creator to give them a scrap of wonderful nature.

And God searched in the bottom of his bag and threw into the middle of the lifeless steppe the remnants of the picturesque mountain cliffs and lakes with crystal-clear bluish water, and distributed with his generous hand emerald meadows covered with flowers, springs with icy-cold water and merrily murmuring brooks.
He covered the mountains with a colorful carpet of different trees and shrubs, and abounded the forests with animals and birds, the lakes with fish and meadows with insects and butterflies, which cannot be found in the steppes for one hundred miles around. Thus Borovoye came to light.

In the north of Kazakhstan, between Astana and Kokshetau is a wonderful district, a real oasis, named Borovoye. Geographically, this nook is called the Kokshetau heights and the local guides gave it the name of Kazakhstani Switzerland. 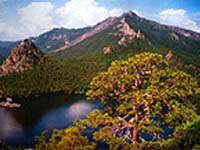 The heights of Borovoye are in fact not that high: 500-600 m. for the average hilltops, 300-400 m at the waterline of the lakes, with the Kokshetau Cliffs reaching 947 m, at the highest point of Kokshetau mountain (Blue Mountain). To the south is situated Burabai (camel) Mountain (690 m.) a fine panoramic point. Still to the south are the Shychinskiye hills, the largest of which is called Zheke-Batur - a lonesome fighter (826 m.)

One can not help but mention the lakes of Borovoye. There are many. Lakes Shychie, Borovoye, Big and Small Chebachie, and Koturkul glitter on the green carpet of the forest.

The small lakes Svetloye, Karasye, Gornoye, and Lebedinoye can be seen from Kokshetau Cliff. The visiting card of Borovoye is Blue Bay on the lake of the same name. Right from the waters of the bay Mount Zhumbaktas (Mystery, Sphinx) soars.

Every name here has its own legend. For example, the Sphinx is interesting when one looks at him from different points of view, for then one can see the face of a young lady with waving hair, then that of a woman and in the end that of an old woman.

Borovoye is more beautiful than a fairy tale. The harmony of the mountains and forests and lakes creates not only the unique beauty of the landscape, but also a special healing climate.