As in all Central Asian countries, Kazakhstan culture has a well-developed tradition of hospitality. Welcoming guests into your home was taken so seriously that a person could be reprimanded or even fined for failing to comply with the recognized customs of hospitality. Embedded within the Kazakhstan lifestyle was the expectation that hosts were to receive even uninvited guests with great honor.

Per tradition, the guest was seated at a place of honor in the middle of the yurt and was treated to Kazakh traditional food and kumis (mare’s milk) and presented with special gifts. 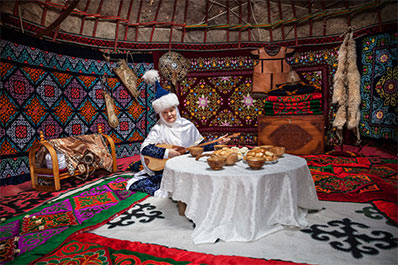 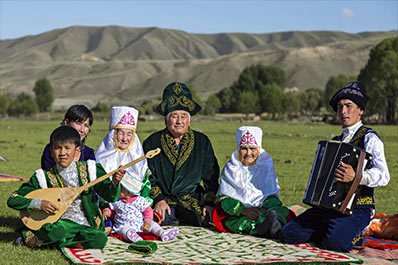 Various customs were followed depending on the situation and the status of the guest. For example, it was customary for an especially respected person to be given a horse and a shapan, or national robe.

Other notable customs of traditional Kazakh hospitality include:

Baht - Baht required the oldest and most respected elder in the family to bless the guest before he departed on a presumably long journey. These blessings and well wishes were typically framed in poetic form.

Belkoterer – Kazakh values hold the elderly in high respect, and it’s customary to look after them. Belkoterer is the visitation of the elderly by relatives or neighbors to give them food and spend time with them.

Bezsaksy - Traditionally there are five gifts that could be given to honored guests: a camel, a horse, a carpet, a saber and a fur coat. Collectively these are called bezsaksy.

Yerulik - When new settlers came to the village, neighbors would stop by to meet them and to provide all kinds of support, including financial assistance, known as yerulik.

Zhylu – Zhylu are kind acts to help those in need. If a person had a misfortune such as losing their home and possessions in a fire, flood, etc, caring people supported him morally and financially.

Korimdik (from the word “to look”) – This is a gift given by friends and relatives who have come to see a new daughter-in-law or a newborn baby for the first time.

Konakasy: It’s necessary to give food to a guest under any circumstances, whether he’s a specially invited guest, a casual passerby or an unexpected visitor. If the head of house did not offer the guest konakasy, he could be fined.

Konakkade is a present from the guest to the owner. The gift was not material, but spiritual, as the guest was expected to sing a song, recite a poem or play a musical instrument.

Shashu is the act of showering people with sweets and money during particular celebrations, an act believed to bring good luck. Children especially love this sweet tradition.