Without exaggeration, the wedding can be called one of the most important events in the life of a Kazakh. Parents would begin to prepare for it long before their children came of age, looking for a worthy family for their child in neighboring villages. The wedding ceremony was accompanied by many traditions, which took place over several days.

The most important of all Kazakh wedding traditions that remains to this day is the ban on the marriage of relatives up to the seventh generation (adat). Other traditions have become outdated in the 21st century.

A Kazakh wedding was celebrated in several stages: matchmaking, meeting of the in-laws, acquaintance of the bride and groom, a lively feast in the bride's home, seeing off the bride and the official marriage ceremony, to name a few. 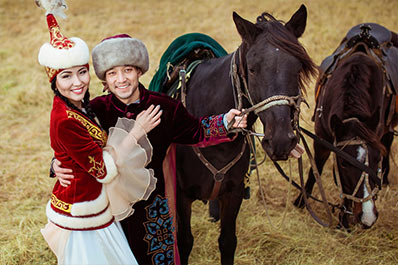 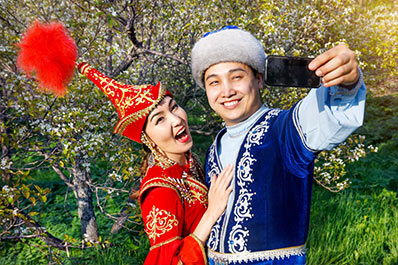 In Kazakhstan, arranged marriage was common, and it was not unusual for the boy’s parents to choose a bride long before he became an adult. Families with strong ties would sometimes agree to marry their children even before they were born. In other cases, the matchmaking took place immediately after the birth of the children.

Parents would travel to neighboring villages to get acquainted with families with young, prospective brides for their sons. They would learn all they could about potential in-laws, right down to the presence of hereditary diseases in the family.

When two families reached mutual agreement, the so-called kyz aitytru took place. If parents were able to find siblings from a suitable family to marry both their son and daughter, the combination was called kars wer.

Occasionally there were kyz koru events, where the sons of noble parents could see and choose a bride of their choice. Competitions were held at such meetings, with boys and girls alike reciting aitys, a form of oral folk song poetry.

A representative of the bridegroom’s family (souse) was sent to the bride’s father to arrange a wedding. Having reached agreement, the father of the bride and the souse exchanged gifts: a horse and bridle was presented from the groom’s side, and a festive robe from the bride’s family. When the representative of the groom returned home with the robe draped over his shoulders, the family greeted him with excitement, showering him with sweets and coins.

Meeting of the In-laws (kuda tusu)

The matchmaking was followed by the meeting of the in-laws, when the father of the groom and his relatives went to the bride’s home to present gifts. The bride’s family invited the guests to a table to eat a special dish made from liver and fat. The in-laws would eat together from one dish, after which they were closely bound together. After this meal it was considered shameful to rescind on the agreement, and if one of the parties decided to cancel the wedding, they had to return the gifts and pay compensation.

Before departing, the matchmakers were also presented with precious jewelry, clothes, hats and animals. The richer the families, the more luxurious were the gifts. The very wealthy could give a whole block of gold or even a mare with a foal.

Later the details of the wedding were discussed: the date, place, cost and dowry. When the matchmaking was officially over, the bridegroom paid the dowry to the bride’s family, often consisting of cattle.

Acquaintance of the bride and groom (kyz kashar or uryn kelu)

Having paid the bride price, the groom could finally visit his future wife for the first time. This visit was played out as if it were secret, although in fact the whole village knew about it. The groom and his retinue arrived in the village and performed many ceremonies before the groom could meet the bride's family. The next day a celebration was held in which the groom, bride and other youth sang, danced and presented one another with numerous gifts. The girl would give the groom a scarf as a symbol of her innocence.

On their wedding day, the groom would come for his bride. Dressed in a red robe and a headdress adorned with eagle owl feathers, he was expected to pay a fine unless he performed various tasks. The groom brought livestock with him, the meat of which would be used for a wedding feast, along with numerous gifts. The richer the bridegroom was, the more luxurious the gifts that would be expected from him.

The bride would get dressed in her father's house, with the final piece of adornment being the saukele headdress, a revered piece of Kazakhstan traditional clothing. This headdress was the most expensive feature of her costume, and the most experienced, respected woman would be entrusted with the task of putting it on the bride. The headdress symbolized the entry into married life, a farewell to the carefree girl of former days. She was required to wear this, with her face veiled, to the groom’s home, and the groom would pay an expensive ‘ransom’ for the saukele.

Gifts for the bride were called jasau and included precious jewelry, luxurious clothes, carpets and dishes. Sometimes this jasau was much more expensive than the dowry itself.

The wedding celebration, or toy, included wrestling, horse races and other activities. At the festival, they sang traditional choral songs in which they wished the young couple a happy life together.

Seeing off the bride

On the eve of her departure from her father’s house, the bride would say goodbye to her relatives. This was a time filled with gift-giving – the family gave the bride treasured gifts; the bride’s father gave his son-in-law and close relatives clothing; and the groom gave the bride’s parents additional presents.

The father said a prayer of blessing before his daughter departed and at sunrise, the girl was escorted from her father's house. She sang a special song of farewell to her family. The girl was not allowed to look around.

The girl was taken away by her groom and his friends, of whom there had to be an odd number. The matchmakers led the caravan, the bride rode behind them, and at the end of the caravan, young men were charged with the task of joking and singing special songs. Anyone who met the caravan on its way could stop it to ask for a small gift, in exchange for which they wished the young couple happiness.

When the wedding party arrived to the girl’s home, another celebration and more gift-giving ensued.

Arrival of the bride to her new home (kelin tusiru)

The bride, along with the husband’s sister, was met near the village by young girls who came out to escort her into the house and seat her behind a special curtain. A big celebration was arranged, to which relatives and friends of the family were invited. As soon as all the guests arrived for the holiday, the bride was brought out and the betashar ceremony – the uncovering of the bride’s face- began.

It started with a special song, during which the girl bowed to her husband’s relatives while they responded by giving her gifts. When the song ended, the mother-in-law approached the young bride, kissed her and, with wishes of happiness, took off her shawl. The women present at the celebration would then use this shawl to wrap up a bowl of mare’s milk to ensure that the new bride would help to continue the family line.

The Muslim ceremony neke kiyar was performed in the mosque the day after the celebration. The rite was performed by a mullah (Muslim priest), with only four people present: the groom, bride and two witnesses. The mullah would read a special prayer three times while holding a bowl with water and silver coins at the bottom, and the couple had to drink from it several times from the same edge. After that, the witnesses also drank from the bowl while removing the coins.

On the first night, the husband’s older sister or relative would prepare the young couple’s bed while giving them humorous advice and instructions. The next morning, the groom had to give his new bride a valuable gift (zholdyk).

Rites after the wedding

The wedding was over, but the observance of many traditions continued. The parents of the young had to host a tos to which all the young female relatives of the groom were invited. They were treated with gifts on behalf of the bride and groom.

Neighbors and close relatives invited the girl to visit in a tradition called korset so that she would quickly get used to her new surroundings. The girl always brought gifts with her, as coming empty-handed was considered impolite. During the visit, they checked to see how courteous, well-educated and socially adept she was.

The groom must go to visit his wife’s father, and of course special gifts were also brought along for this occasion.

Interestingly, the new bride was not allowed to visit her father’s house for a whole year. It was believed that this would help her adjust more quickly to life in a new family.

Wedding traditions today
Today, the modern Kazakh wedding is heavily influenced by European customs, and Kazakhstan dating customs are much different than they were in the past.

However, along with having a wedding procession, a bridal bouquet and photo shoots, Kazakhs continue to honor and observe many of their ancestors’ traditions. The bride’s white dress is often complemented by the traditional saukele, and a scarf is still placed on her head in her new husband’s home to mark her change in status. Weddings are still held over the course of several days in Kazakhstan. Traditions may have changed with the times, but many traces of traditional Kazakh weddings can still be seen today.