Information on the most interesting Kazakhstan museums

The Central State Museum of the Republic of Kazakhstan

The Central State Museum of the Republic of Kazakhstan was established at the beginning of the 1930's in Almaty. The current building dates to 1985 and hosts four large exhibition halls, covering hundreds of unique Kazakh exhibits including spiritual and cultural material describing the thousand-year history of the country.

The A. Kasteyev State Museum of Arts

The State Arts Museum named after A. Kasteyev includes over 20 thousand exhibits in its collection (painting, graphics, sculpture, theatre, and decorative art).

It is a member of ICOM, the International Confederation of Museums.

There are fourteen permanent, temporary and traveling exhibitions.

The Museum's acquisitions began in 1935-36, when the Russian Museum and the A. S. Pushkin Museum of Fine Arts donated 200 works by Russian and Western masters. The Museum's collection traces the art history of the East and West from ancient to present times. 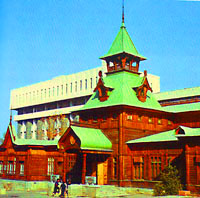 The State Museum of National Musical Instruments was created in 1980. It is one of the cultural sights of "The Southern Capital". Kazakh musical instruments have been collected in the Museum from all regions of Kazakhstan, as well as from the CIS countries and other parts of the world.

The collection includes personal dombras of poets, zhyrau and composers, such as: Abai, Zhambyl, Makhambet. Amre, Dina and other figures of the musical arts.
The Museum is located in a traditional Russian wooden building, dating to 1907.

The Archaeological Museum of the Kazakhstan National Academy of Sciences

Set up in 1973, the Museum includes four exhibitions illustrating the development of civilization in Kazakhstan from the ancient period up to the late Middle Ages.
The exhibition demonstrates the continuity of Kazakh culture and traditions.

A statue of Zhambyl Zhabayev, a well-known Kazakh poet, is located in front of the Museum.

The Museum was founded in 1977. Its exhibitions show the history of Kazakh writing and printing as well as modern publications in Kazakhstan. The collection covers over 20 thousand exhibits, including rare original manuscripts, current periodical editions, ancient drawings, booklets, emblems and charts.

The Geology Museum of the Academy of Science

This unique Museum is located in a basement filled with semi-precious stones, which visitors can reach via elevator. Its main exhibition includes collections of the natural mineral resources and stones of Kazakhstan. Visitors of all ages will enjoy the interactive computer show, demonstrating different geological processes. The Museum also includes a shop selling jewelry, fragments of ancient rocks and precious stones. This is a good place to buy gills, jewels from ancient Kazakh culture and modern art. The Museum also organizes a five-day geological tour throughout the Zhailiy Alatau region.

The Nature Museum of the Republic of Kazakhstan

The Nature Museum is a section of the Research Zoology institute of the Academy of Science.

Visitors can learn about Paleontology and Zoology. The Paleontology section displays some very interesting exhibitions with skeletons of animals in petrified wood, found in Kazakhstan, dating from early geological epochs. The collection includes the original skeletons of dinosaurs, giant rhinos, giant pigs, a petrified tunic and many other fascinating exhibits, which will take visitors right back to the Jurassic Period.

The Zoology section includes a large variety of birds, mammals, butterflies and other insects, snakes and reptiles which inhabit Kazakhstan.
The Museum is a good place to learn about Kazakhstan's natural beauty.

It was built at merchant Talibai Yuldashev's request by two masters from China, over 100 years ago. The architectural style is classical Chinese. The Museum includes a small mosque, the main mosque, a medrassa (Islamic school), a portal and main gates. It has a unique architecture, built without nails, with a ceiling made from Ili River cane.

The Museum was established in 1947 to acquaint visitors with the literary heritage of Zhambyl Zhabayev, the famous akyn (poet). The Museum complex includes the akyn's house, where he lived in 1936-38 and 1938-45, a conference hall where the akyn's ashes are stored, a garage and an administrative building. The complex is located among picturesque surroundings. N. Tlendiyev, a well-known composer and conductor, is also buried on the grounds.

It was specially designed and built in 1985 and is located among beautiful surroundings, not far from the grave of Shokan Valikhanov. He was a great Kazakh scholar, scientist, and traveler and the museum demonstrates his short, but brilliant life and creative heritage. A statue of Sh. Valikhanov is located near the Museum.

The M. Tynyshhayev Historical Museum of the Almaty Region

It was established in 1974, moved in 1985-92, and hosts ancient archeological pieces of linysu, such as the military armor of the Ili Kazakh warriors, famous manuscripts and ancient musical instruments.