Astana, the capital of the Republic of Kazakhstan since 1997, is situated on a picturesque bank of the Ishim River.

The town of Akmolinsk acquired incorporated status in 1862. It had long been famous for its fairs. Merchants from all regions of Kazakhstan, Russia and the Central Asian countries traveled here. As the development of virgin lands began, the town was renamed Tselinograd and typified the administrative center of an agricultural region.

Since acquiring the status of capital the city's face has changed dramatically. The architects and builders working in the capital create wonderful architectural ensembles, which harmoniously combine modern design and oriental flair.

The Baiterek Tower has become the city's symbol and its visiting card. The height of the structure is 105 meters. At the height of 97 meters there is an observation deck providing a bird's eye view of the city. The figure of 97 was not chosen at random. It symbolizes the year of the movement of the capital from Almaty to Astana. The Baiterek Tower accommodates an art gallery, a large aquarium and a restaurant. 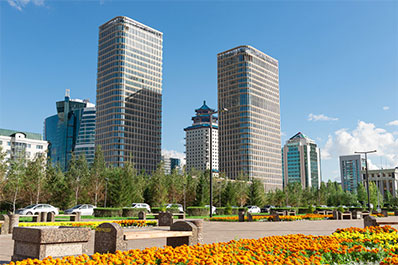 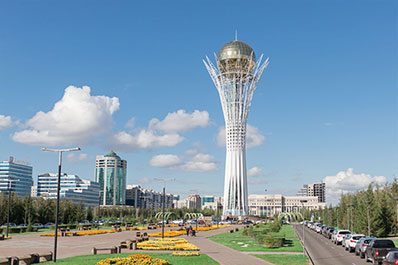 Astana has become one of the largest business centers in the region. All governmental organizations, the diplomatic missions of 44 countries and 113 joint ventures and foreign businesses are located here.

In 1999 by decision of UNESCO, Astana was awarded the title of World City. The city has an opera and Ballet Theater, a drama theater and a variety of museums. The monuments of Astana are a linking element between the new capital and its history, held in esteem by all the people of Kazakhstan.

Currently, many administrative buildings and business and entertainment centers are under construction in Astana. Among them is the Duman entertainment complex. It is a place for public recreation featuring an oceanarium, 3D movie theater, theater, area for slot machines and interactive games, multifunctional sideshow venue, bowling, night club, casino, hotel, cafes and restaurants and an indoor aquapark. 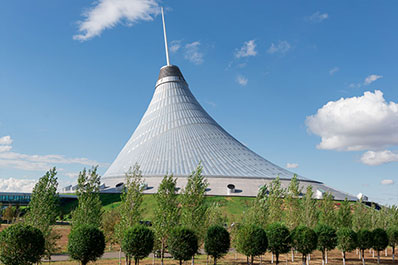 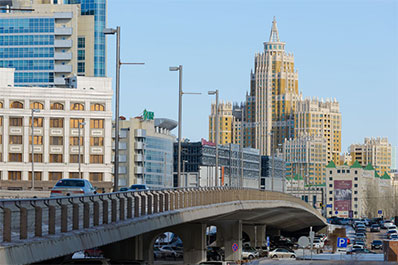 Another attraction of Astana is the ethnopark "Map of Kazakhstan - Atameken" representing a unique outdoor museum. The map area of 1.7 hectares features cities and historical memorials of Kazakhstan.

The climate of the region is extreme with typically long and snowy winters. Average January temperature is -14°C to 18°C which sometimes drops to below -40°C. Spring is late but amazingly beautiful, and comes at the end of March. At this time, the steppe looks especially wonderful with its wealth of blooming toffees and tulips. Summers are moderately hot, with plenty of rainshowers and clear sunny days. Average July temperature is 20°C to 24°C.