The nature of East Kazakhstan District is amazing. The steppe and semi-desert zones of Asia meet the mountainous taiga of Siberia, giving birth to a unique landscape spectrum: deserts, steppes, taiga, mountains draped with eternal sparkling glaciers, and numerous rivers and lakes.

Eastern Kazakhstan Province is home to one of the most unique corners of eastern Kazakhstan - the Markakol National Preserve. The pearl of this area by right is Lake Markakol, set in a hollow, confined in the north by the Kuchum range (over 3,000m), and in the south - by the Azutau range (2,385 m). The lake is 38 km long, 19 km wide and 27 m deep. 27 rivers and streams feed into the lake and only one, the Kaljir river, flows out of it. The water of Markakol lake is fresh and soft, but its main wealth is a fish of the salmon family - uskuch. Lake Markakol is the only habitat for this fish in Kazakhstan.

The scenic rocky shelves of the mountains are covered here and there with larch and silver fir forests. Sub-alpine meadows are rich in flowers and herbs (golden root and maral root, Hedysarum, thick leaved bergenia and others.) Very diverse is the fauna of the preserve. The woods and forests are inhabited by brown bear, elk, fox, lynx, maral (Siberian deer), glutton, sable, ermine, falcon, heath-cock, red wolf, ular, black stork, fish-hawk, silver seagull and erne.

Mountain taiga ranges spread further to the west as far as 500 km, gradually changing to the steppe of the Irtysh area. In the southeast is the huge deserted Zaisan Hollow. Ancient Zaisan lake is located at its bottom, abundant in fresh water fish.

In the south, the Zaisan Hollow is protected from the hot winds of Xinjiang Province in China by the ranges of Manrak and Saur. The highest point of the Saur range is Mt. Muztau (Icy Mountain) at 3,819 m. In the foothills of the Saur range, in the Permian slates (260 million years old) you can find fossils of plants, invertebrates and ancient marine life. Today, in this wild and severe area, you can come across such unique animals as arkhar (wild sheep) and snow leopard. 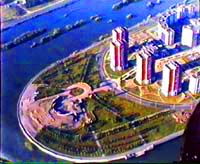 Delightful and versatile is Eastern Kazakhstan Province. Go hiking or horse back riding along its roads, smell the smoke of a campfire, float down its rivers and lakes, feel the heat of the desert and the cool of glaciers, and you will come to know this land and fall in love with it.

Ust-Kamenogorsk (Oskemen) is the largest industrial and transport junction of the Altai mining industry. The city was founded in 1720 as the fortress Ust-Kamennaya at the confluence of the Irtysh and Ulba rivers. It is the center of the East Kazakhstan Province. After four decades of growth it has become a transport hub and trade center. It has been named "the gates of the Mining Altai", because all expeditions to study and settle the Mines in the Southern Altai passed through it. The trade routes to Mongolia and China also run through the area.

By the 20th century, Ust-Kamenogorsk had become the center of the gold mining industry in Kazakhstan. During its history, about 700 tons were extracted, including a nugget with a weight of 25.57kg. Modern Ust-Kamenogorsk is one of the largest centers of metallurgy. Its lead-zinc integrated smelting plant processes a considerable part of the lead and zinc extracted in the Mining Altai. Gold, silver, cadmium, and gallium are also mined there. The main sources of energy of the plant are the Ust-Kamenogorskaya and Bukhtarminskaya power plants. The titanium-magnesium integrated processing plant was built not far from the city. Aside from non-ferrous metallurgy are metal-working and machine-building enterprises, and the food, light and timber industries have been developed here. There are also clothing factories and a silk factory. 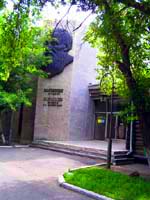 There are many God-given places, where a man can feel himself free and easy. One such place is the Altai. The name of the Altai Mountains, which are rich in forests, rivers, fish, honey, herbs, and minerals and has a stunning beauty, comes from the Mongolian language, translated as "The Golden Mountains". Situated on the borders of China, Mongolia and Russia, it by virtue of its geographical and political features remains ecologically pure.

Semei (Semipalatinsk) is the second largest city in Eastern Kazakhstan Province, situated on both banks of the Irtysh River. Its population is 334,000, and was founded in 1718 as a fortress. At the beginning of the century, Semei had a commercial importance. The caravan routes from Mongolia to Russia and from Siberia to Central Asia passed through here. In the mid-19th century, a quarter of the trade of Siberia and Central Asia passed through Semipalatinsk. At the end of 19th century the city had become an important stop on the Irtysh, with the development of river navigation. Modern Semei, in contrast to Ust-Kamenogorsk, is a city of light industry. As with Shymkent and Almaty, Semei is an important center in the production of consumer goods. Enterprises producing machine-tools, electric cables, fittings, equipment and equipment for the food industry represent the metal-working industry.