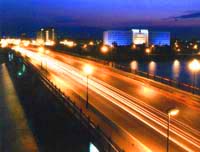 Atyrau District features 400-m steep slopes and dazzling and perfectly round stones about 2 m in diameter. This protected limestone plateau was once the bottom of a prehistoric ocean. The Caspian and Aral seas are its remains. Here the arid steppe meets the wetlands of the Ural River (Zhaik in Kazakh), which resemble the swamps of Florida.

This is a paradise for waterfowl. Only air-cushioned watercrafts are permitted here. Flocks of swans, ducks and geese sweep over the heads of astonished travelers struck by their number. Atyrau is the administrative center of the district. The city and district have a long-established history. Their first records date back to the 3-4th centuries BC. The city chronicle started in 1640. The port on the Ural River founded by the Guriev brothers, Russian merchants, has grown to modern Atyrau, Kazakhstan's biggest oil and gas production center and a fast-growing investment center. This is a harsh land but generous and beautiful in its own way.

Atyrau (former Guriev) is the port on Caspian Sea and the pier on the Ural river (former Guriev). Fishermen founded it as fishing settlement in the mouth of Ural in 1615. In 1992 it was renamed in Atyrau. At the beginning of XX century the fishing was the only branch of economy in the provincial yuezd town Guriev.

Then the railway, which was situated not far from the place of Ural's flowing into Caspian Sea, had a big influence on development of the town. The town is situated in two parts of the world Samarskaya side (the right bank of the Ural River) is in Europe, and Bukharskaya (the left bank) is in Asia.

The employer Mikhail Guriev founded it in 1615 having asked the tsar Mikhail Fedorovich a decree for monopoly right to fish sturgeons in the mouth of Ural, but he was bound to build the town-fortification for defense from raids and to deliver red caviar to tsar. In 1668 Stepan Rasin owned Guriev. The population is about 140000 people.

The town was built on the Seashore, but now it recedes into the distance of 25-30km. The first oil refineries and the plant of oil equipment were built here and the largest fish tinned plant in the Republic was also built here. Today Atyrau became the center of the oil industry of Ural- Embensky district.

The grave of the Kazakh people's composer Kurmangazy Sagyrbayev (1806-1879) is located in Atyrau; the town Saraidzhuk (XVI-XVII), not far from where the ways from Europe and Asia were crossed, is situated in 50km north of the town.

Caspian Sea is the largest closed reservoir in the world, which washes the western part of Kazakhstan. The name of the Sea is connected with the Caspii tribes who had settled shores from time immemorial. It had had such names as Girkanskoye, Khazarskoye, Khvalynskoye. 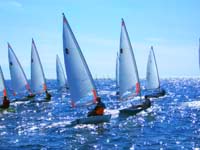 The first mentions about Caspian Sea and its tribes were in the works of Gerodot. The document about the Russian navigators' visit of Caspian Sea and theirs boating is dated back to IX-X centuries. At the beginning of XVIII century Peter-I had begun the constant research of the Caspian Sea (expeditions of Bekovich-Cherkasky A. and others).

Then Soimonov I.F., Ivashinsev N.A., Pallas P.S., Gmelin S.G., Karelin G.S., and others researched the Caspian Sea. The Caspian Sea is stretched from north to south to 1200km; the medium width is 320km, the length of the shore line is about 7000km (6000km of which in the territory of Russia and other countries).