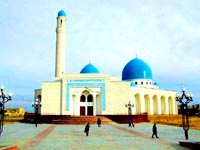 The Treasure Peninsula... This is what people call one of the richest areas of Kazakhstan - Mangistau District. This land is rich in oil, gas, raw materials, and various ores and minerals. It is also true that present-day Mangistau is called a land of tourism and recreation, with a rich cultural heritage.

One of the most attractive tourist routes on the territory of the preserve is the Journey Along the Great Silk Road, stretching across Mangistau district from south to north, and further to the northwest, to the Ustyurt Plateau and through the Shetpinskie Gates to the Caspian coast. This is a place where the transfer of cargo from land to sea and vice versa was performed. A revival of caravan trade facilitated the development of towns (Sarytash, Ketyk, Kabakly, Alta and Sherkala). The ports of Kabakly and Karagan actively traded with Russia until the 17th century.

To the north of Kyzan, on the banks of the Dead kultuk an ancient graveyard has been found. It presumably dates back to the 4th-5th centuries B.C. Experts speculate that this discovery may provide new data on the ancient peoples of the Sacae-Massaget Age who were leading nomad's life in that area.

Within a few kilometers of Akmyshsai sit the scenic Samal and Sazanbai gorges. The Akmysh area, located 18 km from Shetpe, attracts travelers not only with its beauty but also to the historical memorials of the ancient town of Kzyl-Kala.

The Karagie Depression (The Black Mouth) is the lowest point in Kazakhstan and the territory of the former Soviet Union (132m below sea level.) It is remarkable for its unique beauty. Among the numerous attractions of the Mangyshlak peninsula: the Tamshaly Springs (the Jolly Droplets), the Shetpinskie Gates on the Silk Road, the legendary sacred Mt. Sherkala neighboring the ruins of the fortress of Genghis Khan's son, Dzhuchi, lake Saura, the Mangis tau mountains, the deep and long canyon of the Karazhao river, the Kulandag mountains located on the eastern coast of Kara-Bogaz-Gol Bay, Zhosaly Hill and the "Devil's Finger" in the Blue Bay. 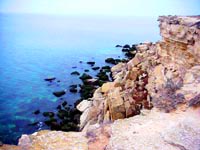 The friendship between Kazakh and Ukrainian peoples began in the distant past. One of the best examples of this was the life of the great Ukrainian poet Taras Shevchenko in the Kazakh lands in the middle of the 19th century. Also, the great Kazakh composer Kurmangazy traveled here and composed the famous kui "Adai". It might be possible that Kurmangazy and Shevchenko met each other. James Abbot, an English traveler in Persia and Afganistan, visited here 10 years before Shevchenko arrived.

The Kazakh hero Suiunkara Urgeshbayev, with his sons and relatives, arrested the English scout and handed him to Orenburg authorities. They suspected that the scout came here with ulterior motives. Shevchenko also visited Chelkar - interesting with its monuments from the past. On November 11, 1918, the Kazakh revolutionary Alibi Dzhangildin also visited this town. Evidence of this is the memorial plaque on Lenina Street. The Kazakh Soviet composer and musician Akhmed Zhubanov lived here. In Sarybulak village in Chelkar district lies a gravestone dedicated to Eset Kotyrbayev and his son Daribai, the gallant comrades-in-arms of I. Taimanov. The caravan route from Russia to Bukhara and Khiva used to pass through here.

Mangistau District has several reserved areas. One of them is the Ustyurt National Biosphere Preserve. Its area of 70,000 hectares is a secure habitat for many rare animals, such as: Ustyurt moufflon, saiga, jeiran, jackal, fox, long-quilled hedgehog, pole cat and others. According to the locals, the Kaplankyr Natural Preserve is home to cheetah. Other national zoological preserves - the Aktau-Buzachi and Karagie-Karakol preserves, also have a variety of animals.

In 1963, Aktau settlement received the status of town. A unique heated oil pipeline is installed here. Galleries of rock carvings from the epoch of the nomads (10th-2th century B.C.) were found on great outcrops in the heart of the peninsula, as well as a necropolis with gravestones decorated by complex ornamentation. Two old underground mosques, built thousands years ago, were found near Ungazy mountain. The most interesting of these mosques is the Shahbagota mosque, because though Islam banned the portrayal of people or their body parts, on the walls of this mosque alongside lotus flowers is the portrayal of a man's palm.

The population of this town is 175,000. It is one of the leading towns of South-West Kazakhstan, built in the 1960's on the Mangyshlak peninsula. It is the center of the oil and gas industry and the Caspian seaport.

The only nuclear power station in the country was built not far from town, along with a desalination plant. Some interesting places: underground mosques (10th-12th cc.), necropolis (9th-19th cc.) on the territory of which there are many stone statues, Beket-Ata necropolis, mausoleums, the excavations of Kuskuduk (an ancient settlement on the territory of Kazakhstan), the territory of the ancient town of Kzyl-Kalda (10th-12th cc.), the town of Fort-Shevchenko (building was begun in the 18th c.), Karagie depression, 132m below sea level and the 3rd deepest depression in the world, Mangystau desert, and the Caspian Sea.