This area of Kazakhstan is famous for its remarkable Bayan-Aul National Park, one of the most picturesque places in the country. It is set within a hundred kilometers of Ekibastuz, a city with very developed industry. This National Park features four types of vegetation: forest, shrub, steppe and meadow.

On the northwest outskirts of Pavlodar City, on the right bank of the Irtysh River, is one of the world's most unique places - the natural memorial called the Goose Passage.

Paleontologists have discovered here the bone remains of giraffe, rhinoceros, hyena-like animals and hypparion (a small tridactyl horse) which lived 7 to 10 million years ago. The total amount of Neocene fossils found in the area is very significant. They are very likely from thousands of species. 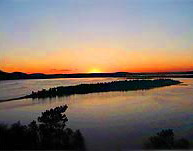 Pavlodar was founded in 1720 under the name of the Koriakovski fort outpost. In 1862, it was remade into a town and renamed Pavlodar. The oldest branches of industry are in the refining of agricultural raw materials.

Modern industry is represented by tractor factories, oil refining and chemical production. Pavlodar is the organizational center of the Pavlodar-Ekibastuz industrial complex.

Pavlodar district develops and grows prettier every day, including the embankment of the Irtysh and the Goose Passage. The renovation of this area will protect the memorial and display its specific character.

In the near future, city residents plan to lay out an exposition park in this area, which would display life-sized plaster casts of the ancient animals once inhabiting this land.