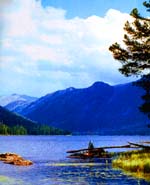 This region can be considered as a united tourist destination. Most important is to consider it in the same way as it would be viewed by a potential customer, e.g. foreign tourist.

Firstly, Eastern Kazakhstan is situated in the center of the Eurasian continent, which is marked by a corresponding memorial, at the crossing point of the 79th parallel and 49th meridian. Additionally, East Kazakhstan has a unique geopolitical position.

The region is located in the spot where four large states connect: Mongolia, Kazakhstan, China and Russia.

Due to these two facts, East Kazakhstan's uniqueness factor is very high. It is a resource which could be used to create effective advertising.

An interesting peculiarity of East Kazakhstan is the possibility to observe on its territory nearly all varieties of Central Asian landscape in a relatively small area. Its territory can be traversed in one tour. Here one has the opportunity to see:

This unique geographical and geopolitical position, in addition to landscape diversity, caused a mixing of cultures and traditions. During one tour one has the possibility to meet with traditional nomadic Kazakhs, representatives of the Kazakh fishing subculture, and Old Believers and to visit a maral nursery (a traditional occupation of old believers). All this in total provides an interesting, varied and dynamic trip schedule for travelers.

The rich bio-diversity is maintained by 24 nature reserves, whose area amounts to 6% of the total of East Kazakhstan. Rare and endemic animals, which can be viewed here, attract nature lovers: birdwatchers and butterfly watchers. The nominal border between Asian and Siberian fauna lies across the territory of East Kazakhstan.

Special attention should be paid to the territory of the Kazakhstan Altai, which is part of the Altai-Sayan eco-region. By its landscape distinctiveness and biological diversity it is one of 200 priority global eco-regions, defined by the International organization, WWF Living Planet.

To the present day this territory has avoided destructive urbanization.

Thus, the East Kazakhstan region is a region where tourist sites of global uniqueness are available. Its landscape diversity and cultural mix is an effective confirmation of the tourist potential of the region.

One can reach the region by airplane, train or car. Airports suitable for hosting international flights are available in Ust-Kamenogorsk and Semipalatinsk. In summer there are direct flights between Europe and Ust-Kamenogorsk (Gannover - Ust-Kamenogorsk). The rail and road routes connecting Ust-Kamenogorsk with the International Airport in Almaty (to Moscow) operate year-round. Accordingly, there exist rather expedient options for travel to East Kazakhstan by air from Europe.

Additionally, one can reach East Kazakhstan by rail. Railroad transport fits into ecological tourism ideology as the most non-polluting. And sometimes the use of railroads is more appropriate as compared to air transport. In such a case it is possible to transit travelers from Almaty (where an international airport is available) to Semipalatinsk or Ust-Kamenogorsk.

Auto transport can also be utilized. The trip from Almaty to Ust-Kamenogorsk takes 21 hours.

East Kazakhstan encompasses a large territory. Often the most outstanding tourist sites are located a relatively large distance from towns and cities (up to 500 km). Taking this into consideration, the issue of tourist transport

inside the region should be handled separately, as compared to transport in the other regions of the country.

Apart from the fact that East Kazakhstan possesses a railroad network, the most realistic and effective transport is auto transport.

Alternative transportation variants are also available - specifically the use of local aviation (see details outlined below).

So, let's return to auto transport. Main roads in East Kazakhstan are asphalted; it is possible to drive at a speed of 70-90 km/h. Such roads are available for the greater part of tourist routes. However in some road sections, the asphalt covering is damaged. Such zones require driving at reduced speeds of 40 km/h for comfort.

In some routes to tourist destinations of importance, roads are unpaved; such roads require driving at a speed which does not exceed 20 km/h and can only be traversed with all-wheel drive vehicles. For example, such a road leads to Markakol Lake (the largest lake in the Altai). In some tourist routes there are mountain roads which are difficult to traverse, where the driving speed is about 5-10 km/h.

An example of such a road is the road through the Burhat pass (a place where the conditional border between the fauna of Siberia and Asia is crossed). For 10 years these roads have been used for eco-tours and considered as an element of Safari. However, recently such roads have caused considerable difficulties, as their condition is worsening which makes carrying out some tours impossible.

Through the experience of East Kazakhstan tour organization, it is reasonable to single out three tourist transport routes: