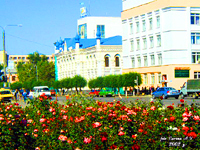 This area has great potential for tourism activity. Among its natural attractions is Lake Shalkar, with rich animal and plant life. The mineral content of its water, identical to that of a sea, makes it useful for medical purposes. The territory of the district also features the scenic Sasai and Santas mountains, Sadovskoe lake and many other attractions.

Uralsk is situated in the place where the Ural River changes its course from westerly to southerly. It is one of the ancient towns of Kazakhstan, in which live about 190,000 people. It was founded about three centuries ago as small Yaitsky town, whose settlers were Kazaks from the Yaitsky Corps, who guarded the borders of the Russian State, and also settlers from the Volga and Don districts. Also, it was founded as a fortification on the bank of the Yaik River on the eastern borders of the Muscovite State at the beginning of the 17th century under the name of Yaitsky town.

In 1773, Emelian Pugachev hoisted the flag of the peasant rebellion in this town. In 1774, the soldiers of E. Pugachev captured Yaitsky, where they held power for some months. After the suppression of Pugachev's rebellion in 1775, Catherine II declared the renaming of Yaik into Ural, and Yaitsky town into Uralsk. The main road of modern Uralsk is Lenin Avenue, which was formerly Mikhailovskaya. The Province museum of historical and regional studies is situated on this Avenue, in the former church of Christ the Savior, which was built in 1891 in honor of the 300th anniversary of the organization of Ural Kazakh troops. There are such sights as: Ural cathedral, the house of the ataman, the izba of E. Pugachev, and monuments to Chapayev. 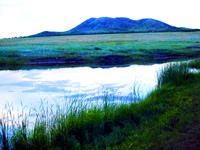 The Ural River is the third largest river in Europe after the Volga and Danube. Its length is 2428km. This river crosses the Caspian depression from north to south, and it is a part of the geographical border between Europe and Asia. The Ural is a calm river without rapids, and there are 99 shallows from Uralsk to Guriev. About 50 kinds of fish dwell in the river (sturgeon, beluga, wild carp, sheat-fish, and pike). Outside the Atyrau city limits the river is divided into two parts: Yaitsky (a shallow branch with treeless banks and full of fish) and Golden (a navigable branch with sandy beaches). The Golden branch flows into an artificial channel. The end of the Golden branch is the mouth of the Ural. Here the Ural flows into the Caspian Sea.