The Ili River is the artery of Semirechye area tourism. The name of the river has been taken from the Mongolian "Ilansu", which means flickering, sparkling. It is formed by the confluence of the Kunges and Tekes Rivers flowing from the Central Tien-Shan.

It flows along a main valley through Kazakhstan; the valley is wide and flat. The riverbed is frequently branched into channels, divided by islands, and overgrown with brush and reeds. The river valley narrows only in the Kapchagai Gorge region, after which it becomes flat. The Ili River flows into Lake Balkhash through several branches (bakanases), developing a broad delta.

At 1,439 km, the Ili is the longest river in Zhetisy. Its source is in Almaty region; on the way back from China it forms the Kapchagai reservoir, eventually plowing into Balkhash Lake, which some call a sea. In warm weather it is one of the loveliest places for city residents to recreate. It is 22 km at its widest point, 45 m deep, and covers an area of 1,847 sq. km.

Along its shores are health spas, guest-houses, beaches and fishing boats. There is a small aquapark in the town. Kapchagai's waters teem with pike perch, bream, wild carp, chub and sheat-fish. Just a short journey from Kapchagai, on the banks of the Ili, is a place that will transport you far back in time. For centuries, an image of the Budda has gazed into the sky from an enormous rock on the right bank. This is Tamgaly Tas (Written stones).

The sun-blackened cliff-faces have preserved many petroglyphs (rock paintings), images of mysterious deities and late Buddhist inscriptions whose meaning has yet to be unraveled. There are many different drawings dating back to the 12th century. Nearby is another rock with writings in an ancient Turkic runic script dating back to the 8-9thcenturies.

The river valley is full of contrasts and is extremely interesting: a full-flowing river among the infinite sand barkhan ridges divides into hundreds of pure lakes, overgrown with water-lilies, which are inhabited by thousand of birds and wild animals in the cane jungle; an abundance of fish and, as a finale- the immense expanse of Lake Balkhash.

All this beauty can be observed during a trip on the Ili River.

The most prevalent fish species is the catfish, the largest freshwater predator, which can reach 5 m in length and 300 kg in weight; such specimens arc extremely rare, but a catfish of 50 up to 100 kg can be easily caught in the Karatal, Ili River or Lake Balkhash.

Of special interest is the "catch and release" fishing on the river. Currently, that kind of sport is becoming more and more popular among the fishing fraternity.

Ili river is 1001 km long. Summertime water flow is 150 - 250 cubic meters per second. The Ili River is situated in Kazakhstan and China and flows into Lake Balkhash. It is formed by two rivers - The Tekes River (Kazakhstan) and Kunges (China) in the Eastern Tien-Shan. Length of the Ili is 1001 km, but if counting from the river-head of the Tekes it is 1439 km. Length of the river in Kazakhstan - 815 km. 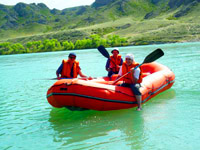 The area of the river basin - 68.4 thousand sq. m. Big tributaries in Kazakhstan - Turgen, Talgar, Charyn, Kaskelen, Kurty, Usek and Chilik river. The Ili River crosses different nature-landscape zones. In the upper section, in China, - Ili is a mountain river, in its middle flow - a flat river, in the lower flow - desert, crossing the Taulum and Saryesik-Atyray deserts.

Area of the Ili river delta - 9000 sq. km. Ili River, is the third largest river in Kazakhstan after the Irtysh and Ural.

The river freezes at the end of November, with breakup of the ice at the beginning of April. Average thickness of the ice - about 0.5 m. Fish - sazan, pike, sheat-fish, etc. Not far from Kapchagai (70 km from Almaty) there is a Hydro-Electric Power station on the Ili river and a water reservoir 70 km long and up to 5 km wide. Before falling into the water reservoir the water in the river is full of sand and other elements. After the reservoir water in the river becomes clear.

After the reservoir Ili flows in a deep rocky canyon, up to 200 meters wide. The river in this part is full-flowing with a rapid current and clear water. The canyon is about 100 meters deep. When Ili leaves the Kapchagai gorge, it flows along the Balkhash plain and falls into the Balkhash lake which it forms. The river presents no technical difficulties.

of OrexCA.com and KTA and KAGIR. Information has been taken from the CD "All about tourism in Kazakhstan".