Kazakhstan rivers and lakes. The largest lakes in Kazakhstan

At the moment, the only permit needed for the Alakol Area is permission from the local police in Usharal to enter the mountain area near the Chinese border. While there are still many open places to go hiking, one should first check with the local authorities to make sure where you plan to hike is permitted. Also arrangements need to be made with the local Zapovednik administration in Usharal before going into the Zapovednik, or conservation areas. 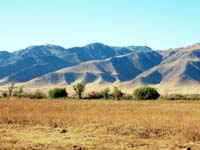 There are many options for transportation from Almaty to the Alakol Lake area. Besides private vehicles, there is a train from Almaty-Beskol , third class round-trip for 2700 T. It takes about 19 hrs and leaves around 9 am, arriving at 6 am the next day. Return tickets are recommended because it may be difficult to get a seat on the way back. From Beskol to Usharal, it is about a 15 minute ride by taxi, at a cost of 400T (negotiable). It is also possible to take the train straight to train stop No. 13 about 1 km from Akshy, or Koktuma Station about 2km from Koktuma. Both stops have taxis which will take you to the nearest village for 100-200 T.

The other option, although not as comfortable for sleeping, is the 1st class bus Almaty-Usharal (1400 T one way) taking about 11 hours. Buses leave in the evening and arrive early in the morning. From there a shared taxi will take you from Usharal to Akshy for 300 T per person or to Koktuma for 500 T per person. This paved road which eventually leads to the Chinese border is in bad condition and takes about an hour to cover the 40 km between Usharal and Akshy.

Usharal
There are two military hotels but they are closed to foreigners. The only option is Hotel Alakol. It costs 500 T per person with communal shower and toilets. There is also a good restaurant located on the first floor. Hotel Alakol is located near the center of town, a couple kilometers from the bus station. 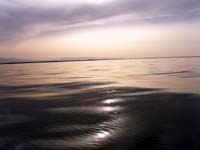 Akshy
There are at least 8 different options for accommodation in Akshy, varying in price and service. Although there is one new two-story hotel, the majority are small family operations being run out of people's homes. A typical place would be about 500 T per person with outdoor shower and toilet. There is also the option of getting a place with meals included for 1100 T per person. For something more exotic, it may be worth staying in a yurt for 350 T per person. All these accommodations are located near the beach in a part of Akshy called the Relaxation Zone. So far, only the UNDP office in Usharal has a complete list of accommodations in Akshy.

There is also accommodation at the Eco-Center run by the Zapovednik. In addition, Akshy has some kiosks, a post office and a couple restaurants open by the beach in the summer.

Koktuma
If you inquire you can find a home stay in Koktuma for 1100 T per person including food. For something close to the beach there is a two story sanatorium at 1850-4100 T per person including meals. It also has some new cabins right on the beach. The other option is the Koktuma Pension and the Pioneer Camp. The Pioneer Camp is the cheapest at 400 T per person, with no showers and an outdoor toilet.
In addition, Koktuma has 8 food stores and a post office with telephone and internet access at the local school. However, Koktuma has a shortage of restaurants and we had to convince the two-story sanatorium to serve us food without staying the night.

Rybachy
Rybachy is lacking in accommodations. What it can offer is bird watching in the nearby wetlands area by motor boat. The tour with a local fisherman and his son takes an afternoon and includes an opportunity to see wild boars. The tour can be arranged through the UNDP office in Usharal.

Activities
There is no shortage of activities in the Alakol Lake area and this is one of its prime attractions. The area is blessed with the multi-colored salt water of Alakol Lake and its black pebbled beaches. The water is said to be 16% salinity and have medicinal qualities. Cosmonauts have used Alakol Lake as their traditional place of post-mission recuperation and relaxation.
In the middle of the lake is a bird island which is a conservation site home to nesting birds in the summer. There are also hiking and horse back riding possibilities in the mountains nearby. For more bird watching and canoe trips there is a wetlands area which is part of the zapovednik. 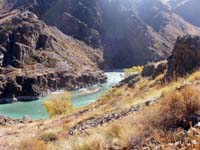 The Zapovednik Experience
All trips into the Zapovednik can be arranged through the United Nations Development UNDP Office in Usharal. The UNDP office is located on the second floor of the Zapovednik administration building, a few kilometers from the center of town. The site manager is Rashid Kapanov and his site assistant, who speaks English, is Valentina Goncharenko. Valentina can be reached by email at: taiga_23@rambler.ru or by office phone at 8 /32833/ 2-22-60.

Bird Island
The main attraction of this area is the bird life, with a huge variety of water birds congregating here, such as Dalmatian and White Pelican, Ferruginous Duck, and White-Tailed Eagle. It is one of the two places in the world known to support Relic Gull breeding colonies. It is also on the migratory route of many other species.
The Bird Island is a few hours by boat and can be difficult to reach due to strong winds, which make traversing Alakol Lake hazardous. Apparently the safest time to make the trip is in June when the winds are calm and many birds stop to nest on the Island.

While there may be nice hiking opportunities near the Chinese border, they may involve special permission from the police. However, the area behind the town of Communism and the Platina Dam is mostly hunting and sheep grazing land. This area is open to foreigners, the only precautions being bears, snakes and a lack of water depending on the time of year. Other than that there is at least one 55km hunting trail that passes shepherds' camps and has a great view of the Ala-Tau mountain range, as well as inspiring vistas of Alakol Lake. The UNDP office in Usharal can arrange a guide, description and a map of the area.

The best period to view the birds is from May to September. It is often possible to hire a boat to visit the islands in the lake for a closer view, however occasional high winds make this impossible in July and August. For further information on the bird life that can be seen at Alakol, visit the web site: http://birding.topcities.com

Beaches
There is more to Alakol than birds. The black pebble beaches around the lake offer opportunities for swimming or simply soaking up the sun. The water, which is 16% salinity, is renowned for its healing qualities. It is traditionally where cosmonauts go for rest and relaxation after a mission. If the water seems boring, try a mud bath instead.

The two big beach areas are in Koktuma and Akshy. The areas in front of the pensions and hotels are clean and well taken care of. All the beach areas in Koktuma are quite clean as they are less visited than Akshy.

Near the lake is another possible activity, as well as walking in the nearby mountains. To really get a feel for the life in the region, take the opportunity to stay with a local family or even stay in a traditional yurt. At the moment, the only permit needed for the Alakol Area is permission from the local police in Usharal to enter the mountain area near the Chinese border.