Kazakhstan Rivers and lakes. The Biggest rivers in Kazakhstan

The canyon extends 154 km NE-SW along the Charyn River, one of the deepest rivers of the northern Tien-Shan (200 km east of Almaty). The steep canyon slopes, columns and arches rise to heights of 150-300 m. The depth of the canyon has preserved a species of rare ash tree that has survived since the Ice Age, which currently still grows in some areas. 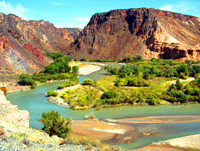 East of Almaty, 200 km by highway, is the breathtaking Valley of Castles of the Charyn river. The Charyn Canyon is a long narrow gorge featuring steep sheer rocks with a rushing river flowing between them. Under the influence of wind and water the sandstone rocks have assumed fanciful shapes reminiscent of exotic figures and fairy-tale characters. That is why the canyons are also called the Valley of Castles, the Devil's Gorge and the Ghosts Gorge.

Doubtless, the natural complexes of the Zailiy Alatau Mountains have great ecological, scientific and aesthetic value. The canyon of the Charyn River, the Hi River's left tributary, which flows in the east of the Region 193 km from Almaty, is considered one of the most picturesque natural canyons. This is a spectacular sight! The canyon is reminiscent of the famous Colorado Grand Canyon in the USA, but in miniature, is very picturesque and varied in its formations, which bring to mind the quaint towers of fantastic castles, thus the canyon's other name " Valley of Castles" Numerous remnants of fossilized fauna, carbon dated to 300 million years ago, can be found on its slopes. 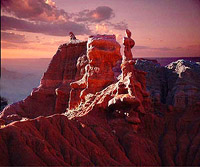 Sights of living nature, the ancient ash and Turan groves are fascinating. The Charyn ash grove occupies an area of 485 ha; the Sogdian ash grows mainly in this area, the forest of which is unique in our country. There is also an "Ash Dacha", a tourist base, where hunting can be organized.

The Charyn River is 255 km long, with an average annual flow of 33.2 cubic meters a second. In its upper region the Charyn flows under the name Shalkydysu, in the middle part it is known by the name Kegen. Just after the Kegen River bends to the north, it starts to bear the Charyn name. The Charyn has many small tributaries and one big one - which is called the Temerlik.

The Charyn is a full flowing, turbulent river. It gets its water supply from precipitation, which is why it has its greatest water quantity in May and June, while most glacial rivers have their largest flow in July and august. In the region of the Kuluktai Mountains, the Charyn flows through a canyon which is 400 meters deep. Water flow in the Charyn is 43.3 cubic meters a second in April; 64.5 in May; 54.9 in june; 42.3 in July; 33.3 in August; 26.6 in September; and 27.3 in October. The river can be divided in four sections of rapids: Muinakskie cascades in the upper part - cascades of a waterfall type; "Toothbrush" rapids; Tau-Teke rapids; "Saigak" and "Armadillo" I and II rapids on the section from the Castles glade to the border check point at the Charyn river.