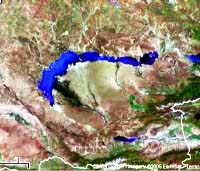 There is a legend; saying that rich man Balkhash had a beautiful daughter Ili. Once Balkhash held a feast and promised to give the winner of the contest his daughter as a wife. Ili loved the shepherd Karatal. She helped Karatal to win the contest of grooms. But Balkhash didn't want to give him Ili. And the young lovers ran away. And the angry father could not catch the fugitives so he turned them into rivers and turned himself into a lake between them.

Here you will come across such vegetation as turanga (Asiatic poplar), willow, reeds and rushes. The White Swan is a true adornment and the symbol of Lake Balkhash. At present it can only be found in inaccessible parts of the lake. But pelicans are the true masters of this area. Also, Lake Balkhash is home to cormorant, small bittern, teal, pheasant, golden-eye, egret and muskrat. And the wild boar is the master of the reed jungles.

For venturesome visitors, Balkhash offers hunting with falcons for heath-cock, duck, partridge, pigeon, hare, fox and even wolf. Also interesting is the marine life of the lake. You can enjoy fishing for marinka, pike perch, bream, catfish and others.

Lake Balkhash is the largest body of water without an outlet after the Caspian and Aral seas. Its length is 614 km, width is 3.5 to 44 km, and its maximum depth is 26 m. One phenomenon of Lake Balkhash is the different composition of its western and eastern parts, connected by a narrow gulf. The western part recieves water from the Ili River and is fresh; the eastern part is salty. The nature of Balkhash is a wonderful land of contrasts.

Bektuata Mountain Range is an oasis in North Pribalkhashye (The northern part of the lake). The pink peak of Bektuata soars to a height of more than 1000 m. In clear weather it can be seen over 100 km away, thus its nickname, the "light house of Pribalkhashye". Bektuata is not vast (4000 hectares), but it includes a great variety of wonderful geological features and gorges. In the depths of its caves one can find mountain crystal morion, a rare mineral quartz.

These granites have all imaginable forms. Their names are "Mushroom", "Trunk", "Turtle", etc. Numerous ancient monuments and mounds, many of which have been preserved, may still be hiding mysteries of life.

The most interesting specimen of cultural architecture of the 18th c. is Ak-Beket Mazar. Mazar is a circular building in the shape of a yurt (tent).