The Altyn-Emel State National Park, the largest in Kazakhstan, is located among the southern spurs of the Zhungar Alatau Range on an area of 520 thousand ha. Unique natural formations and monuments from ancient cultures, being eco-tourism features, are located within the park; the Singing dunes, the Aktau Mountains, forming a "lunar" landscape, and also the five Besshatyr Barrows. Ancient petroglyphs can be found in the gorges. Animal species, entered into the Red Book of Kazakhstan, are also found in the park, such as dzheiran and kulan, and also black stork, falcons, bearded-eagles and others. 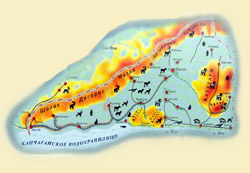 Here one can drink in the peerless beauty of the multi-colored mountains of Aktau and sand mountains of Katutau. In the Park some historical monuments, such as the Scythian burial mounds of Bes-Shatir dated to the 1st century BC and the Tamgali-Tas with ancient rock drawings, the earliest of which can be attributed to the 16th-13th centuries BC. Here, on the right bank of the Ili River, the famous Singing Dune is situated. On a safari trip, you will meet many animals: Siberian mountain goats (teke), desert deer (jeran), kulan, mountain rams, wolves, foxes, such birds as golden eagle, mountain partridge (keklik) and many others, the majority of which are included in the World and Kazakhstani Red Book.

The National Park covers a total area of 460 thousand hectares and is a unique place in which large mammals such as arhars, kulans, Central Asian gazelles and other rare species entered in the international Red Book and the Red Book of Kazakhstan can be found. 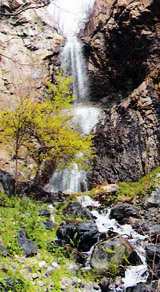 One can find great petroglyphs containing scenes of hunting and everyday lives of the people who lived there thousands of years ago on black stone in the Terekti-Sai Gorge. In the Kyzyl-Auyz Gorge you can take an excursion to a waterfall and an immense cave in which ancient cattle-breeders used to keep their entire flock of sheep. It is only here that a unique "stone" tree grows, whose wood is so strong that it resists even the force of an axe.

Untouched, completely uninhabited places can be found in Altyn-Emel: Aktau (the White Mountains) an unprecedented beautiful land of amazing colors, with ancient marine deposits from the former Tethys Ocean. A fantastic landscape! Among these vast waterless places, there is an oasis, where, according to legend, groups of wild (snow) people lived; there is a cave, amongst the rocks, on the floor of which a cross has been cut, and to all appearances, it is a Christian hermit's shelter (traces of the Nestorian Christians can be found all over Central Asia, Mongolia and China).

Excursions can be arranged to: the Singing Dunes, the Besshatyr Harrows, caves and rock drawings, the White Mountains, and hikes through the National Park to observe wildlife.

Another unique wonder of nature is the Singing Dunes, 182-km northeast of Almaty, on the right bank of the Ili River. In dry weather this sand dune emits a sound like an organ playing. The Singing Dunes make an unforgettable impression. The scarcely perceptible movement of sand sliding down the slope causes the humming and vibration. The friction caused by the movement of dry grains of sand, combined with the dry air, electrifies them, causing the vibration. Because of the surrounding favorable resonant conditions, powerful sound waves are produced which bouncing off the solid ground also cause the dune to vibrate. The sound can be heard from several kilometers away.

The length of the sandy ridge exceeds 3 km, its width is about 500 m, and height over 100 m. The singing sands usually are loudest in dry weather with a western wind. There are other such places on the Earth, but the Kazakh dune is the highest among all with similar properties.

One can see various trees such as flat wracks and dzhighida, and various shrubs: willows, honeysuckles, and Ili barberries. Nearby there is a spring where Chokan Valikhanov, the outstanding Kazakh educator and traveler stayed in 1856 on his way to Kashgar.

Black saxaul grows in the steppes and there are thickets of white saxaul on the slopes of the singing dune.

One can observe a wonderful phenomenon taking place in the park: entire streams of the purest spring water bubble out of the ground and feed the groves and riparian woodlands in the area. It is here that ancient elms, which are over 700 years old, witnessed Genghis Khan's warriors drinking water from the streams.

The necropolis of Bes-Shatyr (Five Tents) used to be a place of worship for the ancient Scythians dwelling on the territory of present day Kazakhstan in the 1st century BC. Here, in an area of 2 sq. km, 18 imperial mounds of about 9 m. in diameter and about 2.5 m. in height are situated. Under the mounds one can see crypts made of logs of Tian-Shan fir. This unique monument of the early nomads is in Semirechye, at the head waters of the Ili River. To the west of the imperial mounds, a circle of 45 stone stoves with images of animals carved on them extends from north to south. Scientists consider this place the ritual part of the necropolis.

The Besshatyr necropolis is considered to be a relic of the ancient Sakis living on the territory of Kazakhstan in the 1st millennium B.C. 18 royal burrows from 8 to 70 meters in diameter, and from 2 to 20 meters in height are concentrated in an area of 2 sq.km. A chain of 45 immovable stone fences lies to the West of the royal tombs from North to South, on which drawings of animals are carved. The scientists assume that it is a ritual necropolis site. The complex under the burial-vaults is built of Tien-Shan firs under the mounds. The area of the funerary wooden "houses" is 20 sq.m. and their height is 3 m.

Ancient people are believed to have produced projectiles from this wood. You'll also have a chance to visit an impressive group of tumuli, the so-called king's burial mounds, Besshatyr (bes=five). 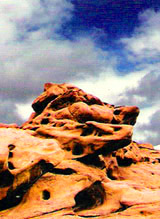 The huge hills, of which the largest is 17 m high with a diameter of 104 m, are the burial-ground of Saxon leaders and generals of the 7th - 3rd centuries B.C. The tumuli are surrounded by the rings of menhirs - metal constructions that are similar to those of Stonehenge erected in Great Britain.

The River Ili, along which numerous caravans of the Great Silk Road used to follow, flows near these tumuli and these days travelers can swim in the river, enjoy its beaches and admire a huge cliff of red stone rising 100 m above the river.

The final stage of our journey are the Katutau and Aktau Mountains. Active volcanoes used to create chaos in the Katutau Mountains long ago and the remains of lava flows subjected to the sun, frost, rains and wind appear to be wonderful images carved on rock. The Aktau are splendid cretaceous mountains. It is a breathtaking land which wins the hearts of travelers with its grandeur and stillness. 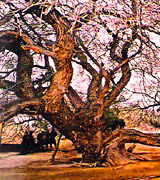 Many species of herons, wood-cocks, dicks, and other waders live in abundance in the waters and marshlands of the Park, the Ili River and the Kapchagay reservoir.

We'd like to also tell you that four European standard hotels for up to 50 guests, a campground for 10 people and a yurt have been built in the Park, and all the routes and tourist spots are equipped with pavilions, outhouses, and public conveniences built from local materials so as to be in harmony with nature. Services of guides, cars for hire, and shubat and kumys making courses are available upon request, as are camel and horse riding. Hunters have the chance to bag a trophy Siberian mountain goat, wild boar, pheasant, or mountain partridge. They can be accommodated in hunting lodges with showers.