In the north of Akmola region the SNNP "Burabay" is located. This resort pearl of Kazakhstan is a fantastic mountain land harboring mysterious wonders. Gorgeous pine forests, cliffs formed of neat gigantic natural bricks, and fantastical shapes of peaks resembling sometimes exotic, sometimes Egyptian pointed pyramids separated by serene lakes. The SNNP "Burabay" was established in August, 2000 and it is under the supervision of the Administration of Presidential Affairs. The territory of SNNP "Burabai" is a part of the Kokshetau steppe, a mixed steppe and forest and hilly upland. The climate is extreme continental here, with hot summers and severe winters. The topography of the territory consists of lowlands, hills and plains. 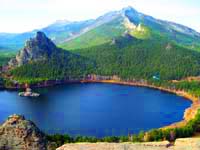 Although Burabay Park does not have any artifacts on its territory, every rock here has its own legend.

Nature has generously scattered precious gifts from its mineral treasury around the Burabay area. Among them is Okzhetpes cliff ("Inaccessible even to Arrows") with a peak resembling an elephant calf, and the creek of the Bun with Zhumbaktas cliff ("Riddle-stone") resembling a mysterious sphinx with severe fearless features.

There are 14 lakes on the territory of the park, each of which has an area of more than 1 km, and there are a great many smaller lakes. The river network is sparse and consists only of small rivers, springs and temporary channels. The largest lakes are Bolshoye Chebachyeand Maloye Chebachye, Shchuchye and Borovoye.

Plant life on park territory is represented by forest, steppe, meadow, marsh and salt marsh species. The flora comprises about 800 species. There are 305 vertebrate animal species.

On the territory of SNNP "Burabay" are 35 permanent recreation facilities. The current landscape of the park is represented by steppe, lake, forest and forest and steppe and lowlands.

Borovoye (Burabay) Lake is situated in the territory of the Shuchinsky district of Kokshetau oblast in the eastern foothills of Kokshe Mountain. Its territory is 10.5 sq. km, length is 4.5 km, width is 3.9 km; average depth is 4.5 m, and maximum depth is 7 m. The shore line is 13.6 km and water area is 164 sq. km. The bowl of the lake is almost round, and its bottom level; the southern shores are rocky, and the eastern shores are sandy. The water in the lake is soft and still, and one can see to the deepest bottom of the lake. Borovoye Lake is separated by mountain ranges from the closest lakes (Big and Small Chebiache, Shuche, Kotyrkol, Zhukei, etc.). The island "Zhumbaktas" is situated in the northwestern part of the lake at a height of 20 m above the water. The cliffs and capes of the northwestern and southern coasts (Kyzyltas, Gorky, etc.) create a unique landscape. The shores are overgrown with pine and birch forests.
The combination of mountains, pine forests and lakes creates special climate conditions in the natural boundary. Medicinal health resort complexes (sanatoriums "Borovoye" and "Okzhetpes"; rest house "Blue Gulf", etc.) are some of the best in the country and built on the eastern coast between the Sarybulak and Gromotukha rivers. There are medicinal mud and mineral springs. The beauty of the nature of Borovoye is proclaimed in Seifulin's poem "Kokshetau" and in Mukanov's novel "Botagoz".

The legend of Borovoye

There are many legends and stories about Borovoye. "When God was creating the world, one of the nations received the lands rich of forests, another got fertile fields with large rivers, and the third got the beautiful mountains and blue lakes. But the Kazakh ended up with only feather-grass steppe... This offended him and he asked God to endow him with some natural beauty. God took the mountains, rocks, beautiful pine and deciduous forests, blue lakes with pure water, and emerald fields covered with grasses and flowers from his korzhyn and spread them with a bountiful hand into the boundless steppes. It was the appearance of Borovoye; of one of the most picturesque places in Kazakhstan, which for its beauty and rare harmonic combination of mountains, forests, lakes, and unique flora and fauna received the poetic name "The pearl of Kazakhstan"." 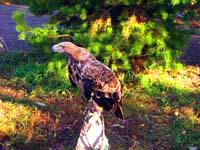 Borovoye is also the name of a health resort, which is situated in the Shuchinsky district of Kokshetau Region, 20 km from the station of Borovoye Resort (in the town of Shuchinsk). From the north it is surrounded by the Kokshetau Mountains at a height of 974m above sea level, covered with birch forests. In the neighboring of the resort are such interesting rocks and cliffs as: "Okzhetpes", "Sphinx", "Cow", "Sleeping knight", and "Knight". The first private health resort was opened here in 1910. Average temperature in January is -16'C, in July is +19'C. Atmospheric precipitation is up to 400 mm, with about 2000 sunny hours per year. The main medicinal remedies here are fresh air and picturesque views. 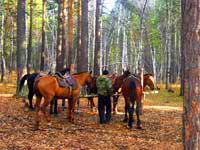 Borovoye Lake is the beauty and pride of this area, featuring a variety of sanitariums, camping sites and resorts, with crowded shores and all the attributes of resort life: restaurants, beaches, stores and dance halls. Across the small mountain isthmus you can get from Borovoye Lake to Bolshoe Chebach Lake. It is perfect for lovers of unhurried and "wild" recreation, who prefer camping and contact with nature. From the top of Mt. Sinyukha ("Kokchetau", 961 m), the highest in the vicinity, opens a panoramic view of the lake, as big as a sea, stretching almost to the end of the horizon. The Burabai National Park system also contains the big Lake Shchuchye and many smaller lakes.

One can not be help but mention the lakes of Borovoye. There are many. Lakes Shychie, Borovoye, Big and Small Chebachie, and Koturkul glitter on the green atlas of the forest.

The small lakes Svetloye, Karasye, Gornoye, Lebedinoye can be seen from the Kokchetau Cliffs. The visiting card of Borovoye is the Blue Bay on the lake of the same name. Right out of the waters of the bay, Mount Zhumbaktas (Mystery, Sphinx) soars.